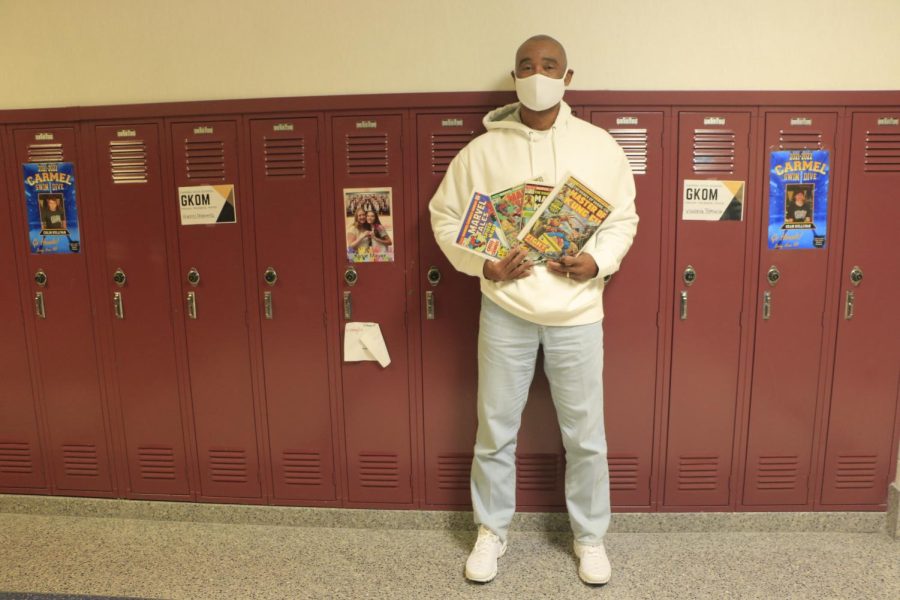 History teacher Kenneth Browner poses with his comic books. According to Browner, "Well there are so many different titles and varieties of books that meet all types of people and needs, emotionally, socially. I just think it’s a good way to really learn. I learned a lot from just reading comic books."

Michelle Wan
How did you get inspired to start a comic book collection?

(I started) in about 1974. I had friends in the neighborhood that were collecting comic books so I just joined in. I’m (kind of) the last one that still does it.

How do you go about collecting comic books??

Wednesday was known as new comic book day, so every Wednesday I would go to the comic book shop and pick up all of the new books and look through everything that I may have missed. There’s a group of us that show up at the same time, so I have called them my “geek squad”. We all show up and talk about comic books.

How many comic books have you already collected?

I had collected) over ten thousand (comic books) at one point. I’ve been reducing my collection because I want to focus on just a few different types of characters.

What type of characters are you trying to focus on?
I am an Incredible Hulk fan. He’s my favorite character so I’m going to try to complete the Hulk collection. I’m going to try and complete theAvengers collection and I also want to complete the X-Men collection and a couple other titles but that’s kind of my focus now.
Were there any challenges when you first started collecting comic books?
My dad did not like it if I left my comic books around the house. If I had left them sitting on the floor he would throw them away. I would have to go dig through the trash and pull my books out. That’s why I have gotten hermetically sealed in the boxes so that my books are always put away.
Do you plan on continuing collecting comic books?

Eventually I’m going to retire and collecting is what’s going to be my main thing. (I’m going to) really work hard on completing those collections. I still have a few more comic events I still need to attend, kind of the holy grail of events like the San Diego Comic Com. Those are some of the last ones. I’ve done New York and some of the other ones, but I’ve got to get that one off my checklist.