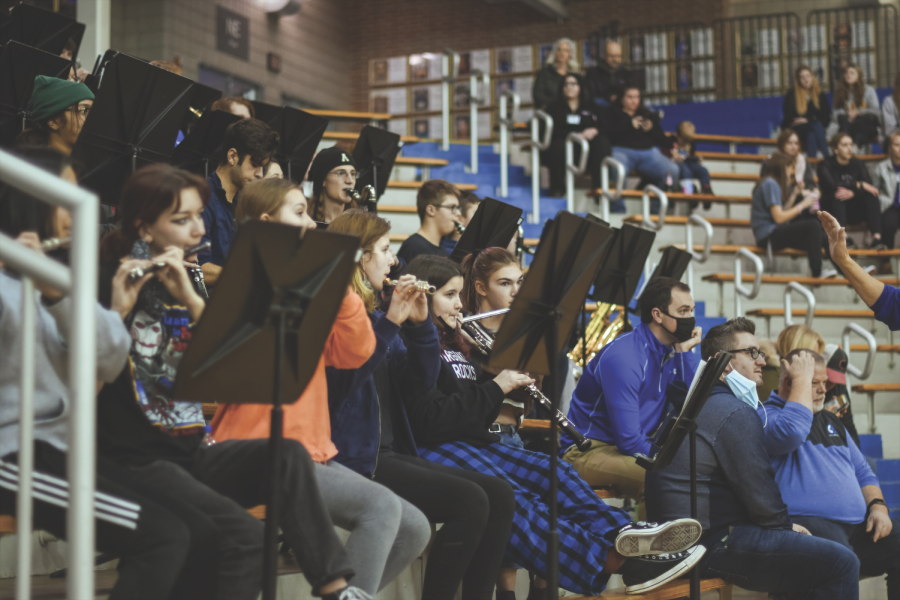 The super bowl LVI’s half- time performance featured five different artists—Dr. Dre, Snoop Dogg, Eminem, Mary L. Blige and Kendrick Lamar—each contributing to the show to engage the live audience. Halftime shows and the live performance they provide increase the viewership of many games, which is evident as Billboard News reported 118.5 million viewers for Katy Perry’s performance at Super Bowl XLIX in 2015.

With the impact of live music considered, Guerin Whitcomb, flutist in the pep band and marching band and freshman, said she thinks the pep band adds to the energy of the atmosphere when they play at basketball games.

“I think that as a whole, the band does (have an impact) because the music hypes everyone up so it’s not just dead silence,” Whitcomb said. “When we play, the crowd gets into it. And the cheerleaders get very hype. It’s kind of like a group effort and everyone gets into it. It builds the energy in the room.”

Mackenzie “Mack” Thomas, member of the varsity women’s basketball team and junior, said the energy of the crowd and band are reflected in her team’s performance as the basketball players tend to get hyped up when the crowd does.

“The presence of a larger crowd definitely brings more energy to how I individually (play) and my team plays. When the crowd is bigger and more engaged then we tend to get more hype when things go well and stay focused when things don’t go our way. When there is more energy, we can usually also see a better performance from our team, so enthusiastic crowds help with that… The band playing music also adds more of that energy to the atmosphere,” Thomas said.

Whitcomb said the pep band plays music when the basketball team is not actively playing. Whitcomb added that by doing so, the band tries to get everyone in the school spirit by playing familiar songs such as the school song and the national anthem.

“Every timeout or break, we play a short excerpt,” Whitcomb said. “It usually depends on what the lineup is—sometimes the choir sings—(but) we play the national anthem (and) the school song.”

Thomas said the music mostly affects her performance prior to the game because during halftimes and timeouts, the players are more focused on their performance.

Thomas said, “Listening to music before games or while warming up can be a good way to get yourself hyped up or focused for game time. The music that is played during the games at halftimes and timeouts don’t really affect our team because we’re more focused on the game.”

Although the basketball players may not be able to engage with the pep band’s music during a game, pep band director Andy Cook said the crowd often begins singing along when they recognize familiar tunes. Cook also said the band plays a mixture of older and newer rock tunes to keep the crowd entertained.

“(We play some) older tunes like ‘Thriller.’ We try to do a mix (with) a few modern tunes like ‘Old Town Road,’ which we haven’t gotten to work out yet,” Cook said. “(We also play) ‘Sweet Caroline’ that they can sing along to.”

However, in order to put out a strong performance and get the crowd engaged, Whitcomb said it’s not just about playing loudly.

Whitcomb said, “(You have) to play with people around you and not stick out. You have to blend together and make (the music) sound good. You can’t just play an instrument—you have to sound in tune and play at the right time.”

With the effort that the pep band puts in to have a good performance, Cook said the group’s ultimate goal is to fill up the gym with live music.

“(We try to) just fill up the gym with the school song and energy. It’s not recorded music so it’s fun just to have that live music,” Cook said.

Cook’s sentiment is backed by research. A study published by the National Institute of Health in 2019 found that live music engages an audience to a greater extent than recorded music does.

In the atmosphere of these games with the crowds, music and team playing, Whitcomb said she also becomes engaged and feels like she’s part of a larger cause.

“(In pep band), you feel involved but you don’t feel like everyone’s watching just you—it’s like a whole group of people,” Whitcomb said. “So you’re involved in a team.”