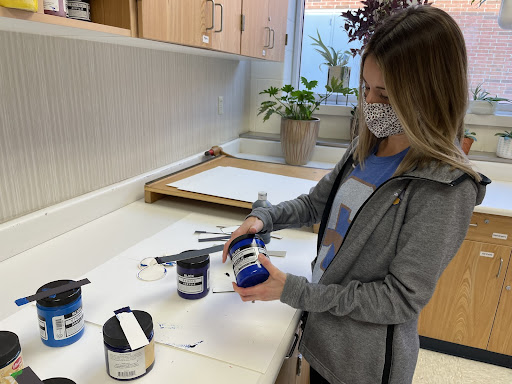 Painting teacher Anna Kramer closes the acrylic paint jars used in her painting class. She said, “Usually I start (the year) by teaching color theory because that’s huge with painting”

Painting teacher Anna Kramer said she changed a typical painting project to better fit the amount of creativity needed for her painting class. In this change, Kramer got rid of the typical blocked color wheel, and allowed the students to seek design inspiration from nature.

“Usually I start (the year) by teaching color theory, because that’s huge with painting, it’s all about colors and how to mix color and that’s something that can be kind of challenging,” she said, “So in the past I used to do a really boring color wheel. It was just what you think it is, a circle where you are just filling in colors and this year I got bored. I get really bored with things like that… (This time), some people did an ocean theme where they just drew fish, jellyfish and sharks. It then formed a circle and they filled it in how you would a color wheel.”

“I think it helped me understand the color wheel more and remember it better. Having to come up with a concept and then paint it made it way easier to remember rather than just painting the color wheel,” she said.

Kramer said students can now show their own ideas with this project, especially during the second semester.

“The nice thing about second semester is that it is like a college level class and so I’ve really gotten to know all the students from first semester and it’s more pushing students to work on their own ideas, being creative, developing new processes and techniques and just continuing to work with painting,” she said.

Kramer said that keeping up with creativity throughout your life will help art not be so intimidating in the future.

“My oldest son is five. He is in that mode of loving art and it doesn’t matter what it looks like, it’s okay if it doesn’t look proportionate. And it’s like somewhere from childhood to the time you get to be a teenager, that (mindset) is lost. That’s what I notice now, it’s like people are so intimidated and they’re like, ‘Well if I can’t draw so that it’s realistic, I’m just not doing it,’ or I hear, ‘I can only draw stick figures.’”

Mulroy said she has loved art since she was young and has continued to go outside of the realistic art realm.

She said, “We have more freedom to explore and figure out what we like (in Painting 2)… I like to paint cartoon characters and unrealistic things. I think there’s so much more range and not as much pressure to get it perfect like there would be if I was drawing an animal for example.”

Kramer said, “(Painting) is it’s own special media. I think that there’s a lot of room for creative expression and to be around other artists. As a teacher I always get jealous of that. It’s been so long since I’ve gotten to work with other artists in a room, so it’s fun to see that and it’s inspiring for me.” By Avery Carlisle