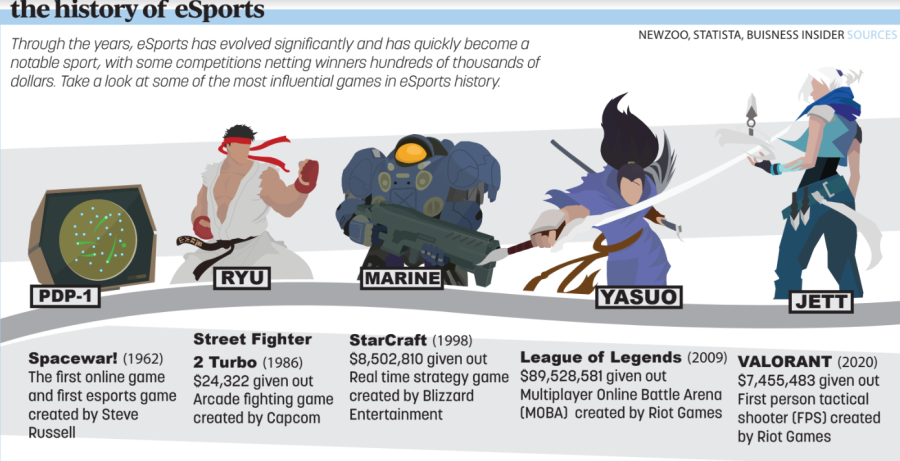 Clubs and extracurricular activities are crucial for any high school student, especially ones in CHS. As CHS provides many opportunities and clubs for all students, out of all of the clubs, Carmel eSports is one of the most unique. For a club, most people imagine it encompassing either academic or volunteering activities; however, Carmel eSports surrounds the world of gaming. From intense sit back games such as chess to fast-pace first person shooters like Counter-Strike Global-Offensive, CHS eSports presents new and exciting outlooks to possible futures and careers for highschool students. The tournament will begin on April 22.

ESports officially stands for electronic sports, not to be confused with video games. ESports takes video gaming to another level with organized competitive gameplay between two teams, governed by its own strict set of rules and guidelines. The difference is comparable to a pick-up basketball game at a park versus a varsity high school basketball game. ESports requires teamwork, communication, critical and strategic thinking, creativity, sportsmanship, and leadership — much like traditional sports.

ESports can provide a gateway to colleges and universities. The National Association of Collegiate eSports (NACE), the main governing body for varsity collegiate eSports, has awarded millions of dollars in eSports scholarships and aid over the last five years. Currently, more than 200 colleges and universities offer nearly 15 million dollars in scholarships. ESports majors and careers are becoming increasingly more accessible. There are growing opportunities to find employment in eSports-related careers. These opportunities include broadcasting, marketing, graphic design, multimedia production, hospitality, coaching, and management.

It provides many opportunities for growth and learning, such as the creation and practice of soft skills, including communication, collaboration, critical thinking and creativity. Many of the same skills that employers are looking for in recent graduates. ESports can provide a gateway to colleges and universities.

“Battlegrounds is a three-day online national tournament run by Carmel students. It usually is a three-title event, so we run one game on Friday, two games on Saturday, and grand finals for all three on Sunday. Students stream the entirety of the event on Twitch, and the winners receive both a trophy & cash prize,” Gentilcore said.

Gentilcore stated that Greyhound Battlegrounds is one of the biggest tournaments we host and compete in and the tournament will be highly competitive since there are teams spanning across the country preparing and competing in this tournament. Nyle Nasir, senior and captain of the League of Legends team, elaborated on how CHS hosts and prepares for this important event.

“To prepare, I personally am in charge of reaching out to local and national companies in order to find potential partnerships that can help fund the tournament, alongside negotiating agreements with these companies. I am also in charge of making sure we uphold our end of the deal, properly and accurately representing our sponsors. I expect to have lots of growth in this next tournament, as since our last one we have largely increased our personal connections and I have personally improved a very large amount when it comes to proper outreach and marketing,” Nasir said.

“Historically, we’ve spent one to two months acquiring sponsors, making promotional content, creating the tournament site, and getting registrants for the event. We then spend about 50 hours on the weekend streaming and running the tournament. This year, we hope to spread out that preparation phase over the course of several months to improve the quality of the product we’re providing to the community in terms of both structure & prizing,” Gentilcore said.

Gentilcore expressed his goals and expectations for this upcoming tournament.

“I think it’s going to be our biggest and best Battlegrounds ever. We really want this to stand out as one of the best high school tournaments in the entire nation this school year,” Gentilcore said.

Srikrishna Ganeshan, sophomore and captain of the Varsity Valorant team, says that he is very excited to see his team’s performance in this tournament.

“CHS prepares for this tournament primarily through practices and scrimmages in which we can go over strategies, and even play other teams that are around our same skill level or better so that our teams can improve as a whole,” Ganeshan said. “My expectations for this tournament are high as CHS holds one of the best eSports programs in the nation. However, I do expect that the tournament will be highly competitive because there are teams across the country that also participate.”

Ganeshan said, since it is his first year as captain, he is eager to see his team’s progression throughout the season with this tournament, especially against highly ranked teams across the nation.

“Regarding my experience with Greyhound Battlegrounds last year, I was very excited considering that it was one of my first experiences with my team in a tournament. Additionally, we were able to put our practice into use and try to compete against similarly good teams and even some better teams. Overall it was a very fun experience, and despite losing in the semifinals, it is generally very enjoyable,” Ganeshan said.