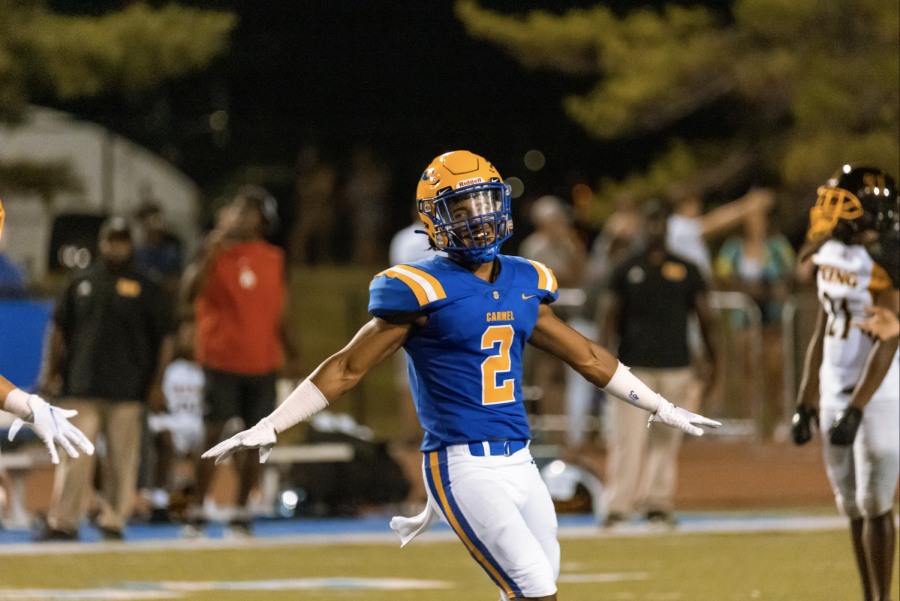 Solomon Williams, varsity football player and senior, celebrates a touchdown. Williams said he is often stereotyped as less intelligent because he plays football, but he does not let it affect his academic performance.

During the football season, senior Solomon Williams was on the field throwing passes to friends or making plays under the Friday night lights. However, Williams, who plans to attend Princeton University in the fall, said he also needed to find a balance between his athletic and academic goals. This balance is showcased with the Scholar Athlete Award Program which is celebrated every spring at this school.

Since 1993, athletes like Williams have strived to receive the Scholar Athlete Award which is geared toward celebrating the academics of athletes within this school.

According to Williams, the program provides athletes with a standard for excellence.

Assistant Athletics Director Jeff Hester said the program helps place a focus on the academic achievements of athletes, which are often overlooked.

“The majority of our athletes do not receive awards or recognition for their individual athletic prowess,” Hester said via email. “An athlete who may not be a ‘star’ for their team can obtain this award by excelling in the classroom.”

As of April 2022, all athletic teams within the school have an average GPA of 3.3. The Scholar Athlete Program aims to recognize
both teams that average above a 3.2 GPA and individuals who average at least a 3.7 GPA. Emma Montarce, tennis player and sophomore, said athletes often strengthen academic skills through their athletics, which may explain the patterns found within the program.

“In tennis, you have to be really focused 24/7,” Montarce said. “There’s not a time where you aren’t focused (in a game), and I think it plays into school because you obviously have to be focused in school.”

Williams contributed to Montarce’s statement, saying athletes on athletic teams also obtain skills which are beneficial in school, and though usually stereotyped as “less intelligent” than peers in other sports, Williams said many athletes in sports like football and wrestling still receive awards for academic excellence.

According to Montarce, while most student athletes are involved in school and might take rigorous classes, often their academic achievements are overshadowed by their athletics. For that reason, the award is important in regard to the debunking “jock” stereotypes about the intelligence of athletes.

“Many people think athletes are kind of dumb, but what people don’t see is all of the work we put in off the court or off the field. Most of us still do all of our homework and study, we just have to manage our time well and we have to stay up late some nights and push through,” Montarce said.

Though Hester said he had not recognized this type of stereotyping occurring at CHS, Williams said he, and many other football players, are often regarded as “less intelligent” simply because of the sport they play.

“Sometimes you’ll get people who assume you’re not very smart or you take school less seriously than someone whose primary focus is academics in the classroom; especially knowing that you are a football player,” Williams said.

Despite these presumptions, Williams and Montarce both said they don’t allow their own intelligence and academics to be affected by other perceptions.

“But I think my academics and success in the classroom kind of speak for themselves. I don’t really need to go around and flaunt any academic skill,” Williams said. “ I don’t think (the stereotyping) is detrimental to who you are in the classroom.”

Montarce agreed with Williams and added that the Scholar Athlete Program deters students from looking down on the academics of athletes. Additionally, she said the program and her teammates allow her to be more driven in the classroom and on the field.

Williams said scholar athletes need to be self-motivated and all possess unique qualities, including time management, motivation and excellence on and off the field.

“Focus and dedication both (on and) off the field (are key), placing just as much focus on academics as you do athletics,” Williams said. “Sometimes scholar athletes are a scholar first and an athlete after, so I think that’s a good representation of the characteristics needed.”