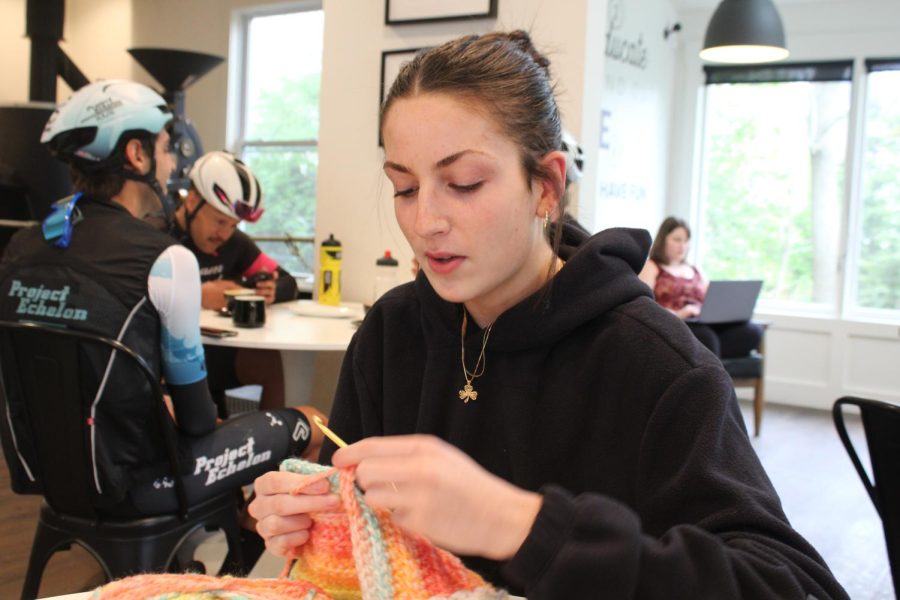 Senior Sophia Boller crochets a hat. Boller said the hat was an order from a friend that she had been meaning to complete.

Senior Victoria Simich has always been in the hobby of homemade goods, be it making books with their grandma or sewing as a means of expression, however, their relationship with handmade goods changed when they entered eighth grade. Then, Simich said, they started thinking more about sustainability, environmentalism and other aspects associated with handmade goods.

Simich said fast-fashion is one of their focuses for how unsustainable and exploitative the process can be, with particular emphasis on the lack of appreciation of the ability of human hands.

“We take advantage and we take for granted the ability (of ) human hands to produce work and there are garment workers in foregin countries that spend the whole day working on something that is at the end of the day (going to) be low quality,” they said. “In reality, humans are capable of so much more than some cheap garment that is (going to) go out of fashion in a month. So I think it’s really important to accept the value of homemade goods.”

Senior Sophia Boller said she agreed with the importance of homemade goods saying it was fun to have a skill that others didn’t.

“Even if that is just making hats it’s important to be able to do something instead of having to rely on companies,” Boller said.

The speed of fast fashion companies touched upon by Simich is often a point of criticism for the industry. According to an article from Vox, fast-fashion company Zara typically introduces more than 20 different collections a year, with social media orientated ultra fast-fashion companies like Fashion Nova moving 600 to 900 new styles every week. This level of production leads the fast fashion industry to produce 706 million tons of greenhouse gases a year and, according to an article from the New York Times, exploitation of workers, as Fashion Nova was investigated by the department of labor in 2019 for underpaying employees.

Simich said though sustainability hadn’t always been a factor when they started knitting 10 years ago, it has become a large focus in their work.

“I am someone that likes to say I try to be very connected to the earth and people around me and relationships and connections and all that so I find that when I can live my life sustainably I find that it connects me more to that and I find that it makes me happy,” Simmich said. “But then also, it’s for the purpose of educating other people and, yeah, it’s on big companies. Big companies, big businesses are at the fault of pollution, but also, I think that as consumers we need to be mindful of what we’re doing. So that’s kind of important to me, consumer education.”

And Shannon said consumers are being more conscious. According to Shannon, fashion has continued to evolve at a quick pace. A pace that also includes sustainability. “If you scroll on TikTok or Instagram, consumers are getting more creative with recycled garments by redesigning them to their preferences,” she said.

Boller, who crochets, said that learning how to create and adapt clothing isn’t much of a commitment and uses YouTube to learn new techniques.

“It does anger you at first because it’s a lot of trial and error and, especially for me, I’m left-handed and there’s only videos of right-handed people (doing) crocheting, so I had to learn everything backwards which isn’t that fun, but once you get the hang of its its not really hard at all,” she said. “It takes a bit of practice but again its nothing you really have to commit to so just try it. If you like it that’s great and if you don’t, well, you wasted five dollars.”

Simmich said that though consumers are not at fault for pollution and shouldn’t be expected to “pick up the slack” of companies, that wasn’t an excuse to not change habits.

They said, “at the end of the day the more people that are (practicing sustainability) the better we get as a society.”