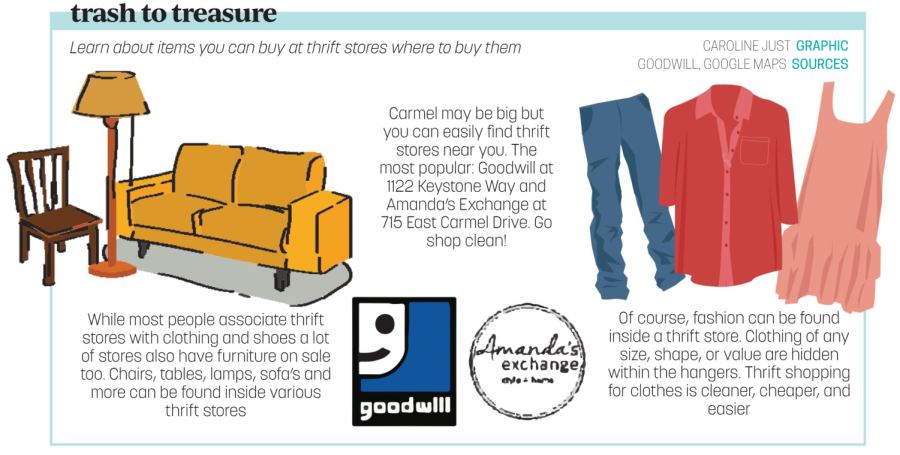 Sophomore Christine Hu has been thrifting since she was 3 years old. Thrifting, which first became popular during the Great Depression, is the process of shopping at stores that sell secondhand clothing.

“It’s basically buying clothes that people don’t want anymore or upcycling. When we started thrifting, it was because we used to be kind of poor so we needed thrift clothes, but now we just do it because it’s a habit,” Hu said.

Hu said not only is thrifting a cheaper way to buy clothes, but it is also more environmentally friendly. According to the U.S. Environmental Protection Agency, the amount of clothing thrown away has doubled from six million tons to 13 million tons in the past 20 years.

Hu said, “Thrifting really has a positive impact on the environment because you’re not buying new materials, and you’re giving clothes that would’ve been thrown away by its original owner a new life.”

Advanced fashion teacher Judy Fisher said she agreed with Hu. However, she said thrifting is not a flawless solution to the amount of textile waste people produce.

“The good part of thrifting is that it prolongs the life of a fabric and it allows the person who thrifted it to not be buying something new,” Fisher said. “The negative is that, eventually, it still becomes part of our trash that gets thrown away and the garbage that is piling up in the environment everywhere that may or may not disintegrate over time.”

Along those lines, junior Olivia “Liv” Pishkur said it can be easy to overbuy clothes when thrifting.

“Although thrifting is beneficial (for the environment), overbuying is still (something people should be careful about),” Pishkur said. “Especially because everything is so cheap, it’s easy to buy a lot of stuff all at once and you don’t wear it six months later and it’s sitting in your closet and you end up getting rid of it again.”

To avoid overbuying, Hu said people should be more mindful of buying what is necessary and set certain limits.

She said, “Pick out five pieces that you like and try them on, see which one you like the most and pick two to avoid overbuying. Make sure to look through everything because you might not always find something you like at first glance.”

Pishkur said she shared Hu’s views. She said people often overlook how much time it takes to thrift.

“One time, my mom was running errands and I was like, ‘Ok, I kind of need new clothes so just drop me off,’ and she texted me two hours later and asking if I was done, and I was like, ‘Almost,’” Pishkur said. “You have to see if there’s staining or if there are rips or trying to find your size and stuff.”

Fisher said many students will alter the garments after thrifting although she said there are challenges that come with altering as well.

“A lot of my students will change (the clothes they find) and either update the fashion or make it fit them better or if they want a different style out of the garments. But let’s say it’s something that has several buttons and you want to match a button, but you may not be able to find a similar button, so then you have to consider the cost of buying all new buttons to put into that too,” Fisher said.

Despite these challenges, Hu said she encourages other people to go thrifting and donate clothes to thrift stores.

“When people thrift, they always think it’s old stuff and it’s not always good quality, but if you look hard enough, there’s actually pretty nice stuff. I have this sweater that I really like and it’s from the ‘90s or something,” Hu said. “Other than thrifting, we also donate our clothes to thrift stores when we grow out of them. Instead of throwing clothes away, other people in need can wear them.”

On the other hand, Pishkur said thrifting is more of a personal choice.

“Thrifting is not for everyone, but if you are trying to save money and benefit the environment and you’re not grossed out by other people owning clothing before you, then that’s something people should do,” Pishkur said. “It’s easy, it’s convenient, and it definitely helps people give their clothes for a different purpose other than just throwing it away and it ends up where it shouldn’t be.”

Ultimately, Fisher said people should be more aware of what happens when they throw away clothes and consider thrifting as an option.

Fisher said, “I think when consumers become more aware of what happens to their actual fabrics after they’ve discarded their garments, they start to think, ‘Oh, that’s one more piece that’s going into our trash pile that is going to hurt the Earth. I would rather buy something better for the environment.’”