The Future of Jobs: In an increasingly automated future, what will we do if robots take our jobs?

On a bright and sunny day, senior Alexa Dow works at Juice Bar, a local smoothie and juice hub. As customers file in to enjoy a freshly-made green smoothie, Dow takes and makes numerous orders for them. The help she gets is from not only her fellow co-workers but also from blenders, juicers and iPad cashiers. Technology has increasingly been a part of not only her working environment, but in the working environment of the world.

Society is technologically advancing, and with it comes artificial intelligence. By definition, artificial intelligence is the theory and development of computer systems able to perform tasks that normally require human intelligence. This includes visual perception, speech recognition, decision-making and translation between languages. Artificial intelligence can be found in most mobile devices through social media, as well as in applications, communication systems and Internet databases. Technology is already immensely present in today’s society and continues to become a greater part of civilian daily life. 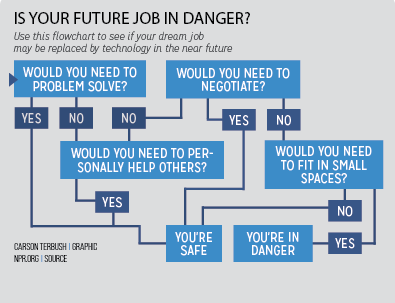 However, artificial intelligence may become more harmful for society and the economy. According to a recent study by Pew Research Center, one robot per 1,000 workers reduces the employment to population ratio by about 0.18 to 0.34 percentage points and wages by 0.25 to 0.5 percent. These numbers may be increasingly alarming for employees, for industries are rapidly growing and in need for more machines and technology. This in turn takes jobs away and leaves more Americans unemployed, causing the composition of the human workforce to become increasingly competitive with its digital counterpart.

Another student who sees the increase in technology at work is junior Quinn Dooley, who works as a bagger and cart attendant at Kroger. However, according to Dooley, this upsurge can cause menial jobs to be on the line. She said Kroger’s competitor, Target, installed collecting machines that push in carts, reducing the job of a typical cart attendant. Furthermore, more stores are installing stations for self-checkouts that take away jobs of cashiers and baggers.

“I definitely feel like my job can be replaced with technology. Other stores like Target have machines that can push in carts, so I think Kroger can have something like that too,” Dooley said.

However, industries that involve advanced skills have yet to be overtaken by artificial intelligence. John Coghlan, industrial technology department chairperson, said currently, from a supplier standpoint, he has not noticed a dramatic increase of technological advancements. With his experience as a construction teacher, he said what technology does is bring down the costs of the goods that would have been manufactured by humans.

“As far as the actual labor force that’s installing those, we haven’t seen a lot of advances in technology, tools (or) materials,” Coghlan said, “but… we don’t have robots installing drywall in houses yet.”

However, Coghlan also said he believes society will begin to see an increase in automation in the nearby future, especially in factory and manufacturing jobs. Despite the upward trend in technology, he said he believes people will always be willing to pay for handcrafted goods rather than machine-made ones.

“I can program a machine to carve an item that a person can also carve,” Coghlan said, “but some people are always going to be willing to pay for that hand-done item.”

Coghlan said currently, employment for construction is at a low because homebuilding is cyclical, or recurrent, so the employment rate depends on the current state of the economy. Therefore, not all labor-intensive jobs could be impacted by an increase in technological usage.

According to a 2016 study by the Pew Research Center, 87 percent of workers believed it will be essential for them to get training and develop new job skills throughout their work life in order to keep up with changes in the workplace. This is consistent with reality for the number of workers in occupations requiring average to above-average education, training and experience increasing from 49 million in 1980 to 83 million in 2015, or by 68 percent. Thus, for many students, a concern is the amount of education needed in order to become employed in the future, as well as what skills need to be developed.

“Students need to know that (losing their job in the future) could happen because of artificial intelligence. They need to continue to take classes they know will benefit their future careers, even in high school, and work hard in those,” Dooley said. 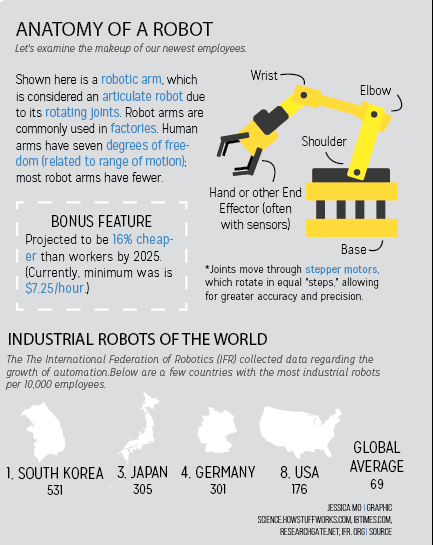 Dow said she wants to be a writer for Penguin Random House Publishing. As reported by Verge, artificial intelligence is beginning to take over journalism writing; a Wordsmith platform by Automated Insights is writing financial stories for the Associated Press, publishing over 3,000 stories every quarter. Even though work that could be given to humans is now being done by robots, Dow said she doesn’t believe it will have an impact on her future job. 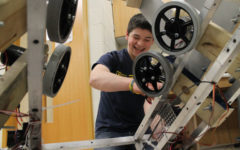 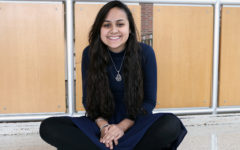 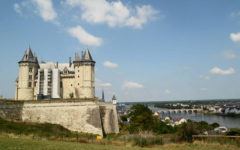 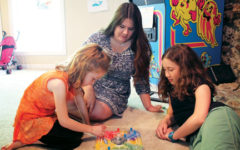 Dow said, “Stories come from people’s imagination and creativity and no matter how hard someone tries, a machine cannot think of its own ideas. Sure, someone could use the machine to write down their idea for them, but that’s basically the same thing people do now when they type a manuscript, just with a little less work. A machine that doesn’t have a brain or any imagination can’t do that. It’s just a machine and its wired to do what people design it for, so I think a lot of the credit still goes to the human individual.” 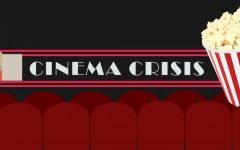 On the third Monday of January each year, people all over the country honor and remember the life and accomplishments of Martin Luther King Jr. (MLK).... 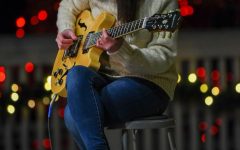 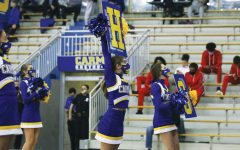