A woman holds her phone, taking a photo of a protest on June 1. The protest was led by sophomore Klay Gabriel, she said it was the first event she ever organized. (Clare Dierckman)

A woman holds her phone, taking a photo of a protest on June 1. The protest was led by sophomore Klay Gabriel, she said it was the first event she ever organized.

Editor’s Note: This issue’s Cover Story is a compilation of follow-ups on previous stories related to the COVID-19 pandemic that were published by the HiLite staff in 2020. Scan the QR codes placed next to each of the stories to view the original piece.

Senior Ben Lin’s family closed down its restaurant, Wild Ginger, from March to May 2020.

Lin said, “When (COVID-19) first started, we (closed down). We didn’t have to close down but when we considered safety and everything, we just decided it would be best to close for a little bit. And even though we were closed, the rent payments were still coming in for the same amount every month, and that was hitting hard since we were making no money. The restaurant wasn’t even open but we still had to pay thousands of dollars each month for rent.”

According to Lin, COVID-19 has worsened this problem.

Lin said, “I definitely think that (COVID-19) has further led to a decrease in Asian-owned restaurants because some of the other (Asian) restaurants around us have closed down. We’ve seen an increase in closures because of the rent. Everyone still has to pay rent, regardless of whether or not they’re closed. So, those that weren’t making too much money in pre-COVID times got hit pretty hard and some of them even had to close.”

Despite this, according to Lin, his family’s restaurant has survived and remains busy these days.

Lin said, “I would say that it has gotten a lot better and I’m really thankful that it has because I know not every business has had the same outcome.”

Click here to read a story about Asian restaurants and the challenges they faced at the beginning of COVID-19.

Optimism declines as economy continues to struggle in United States

According to Kevin Mumford, associate professor of economics at Purdue, before the pandemic hit, the economy had seen its longest expansionary period since the Great Depression.

“But it was a very slow expansion,” he said. “It had a low rate of growth. It was such a long period that generally things were looking very good.”

But when COVID-19 forced businesses to close as America entered its lockdown in mid-March, Mumford said the shock of unemployment was the worst the country ever received. But even then, the unemployment rates didn’t reach the highest rate.

Mumford compared that shock to the Great Recession, an economic downturn that took months to get to the point this recession brought America in only one week.

Many, including the president, claimed America’s economy has recovered since then, citing the Dow Jones Industrial Average hitting a record breaking 30,000 points. According to the The New York Times, many believe the stock market to be a measure of the health of the current economy, but Mumford disagreed.

“The stock market isn’t necessarily telling us what the state of the economy is today; it’s projecting out what we think the future for those large companies is going to be,” he said.

The day the Dow hit that record breaking number, Nov. 25, was the day the White House Coronavirus Task Force revealed plans to distribute 6.4 million doses of a vaccine. Mumford said this was part of that peak.

Instead, Mumford suggested the unemployment rate was a better way to measure the health of the economy, though he said America isn’t out of the woods yet.

He said, “When you don’t go to a bunch of holiday parties or you don’t gather with your family, all those kinds of things just mean the economy will be slower.”

After the death of George Floyd on May 25, Google searches for “Black Lives Matter” (BLM), an organization founded in 2013, reached all-time highs. Since then, as the election and second wave of COVID-19 took BLM’s place in the headlines, searches have steadily declined by 84%. According to sophomore Klay Gabriel, these statistics don’t surprise her.

“Unless someone is very passionate about what they’re talking about or they’re getting these experiences first-hand, they’re not (going to) care enough about it,” she said.

Gabriel said she helped a friend organize the protest that took place in the Carmel Arts District on June 1.

“I knew it wouldn’t change anything with the actual police department in Carmel. Baby steps, in my opinion, are the most important because that’s how you get places,” Gabriel said. 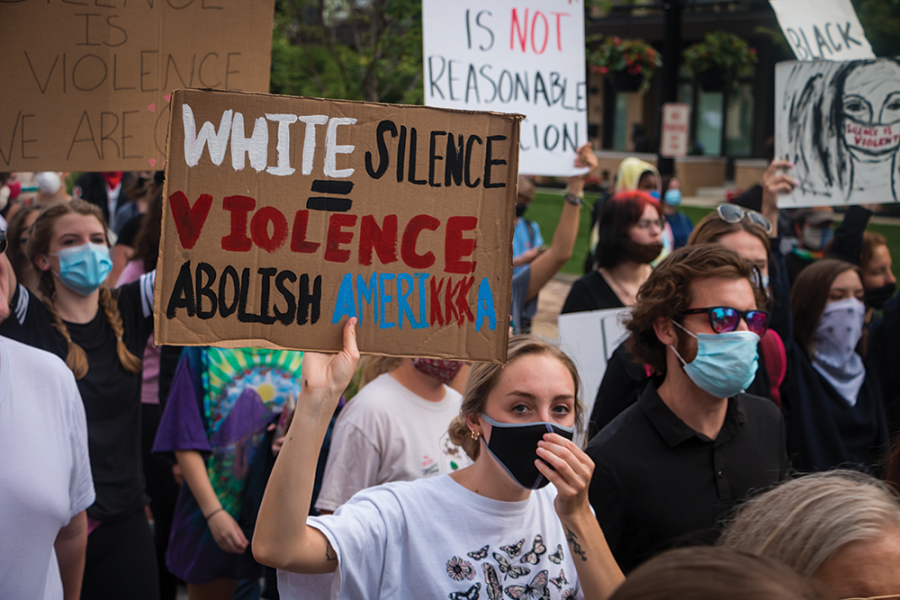 According to Gabriel, though she always cared about the subject of racism, as she is a mixed-race girl from Atlanta, she said she never became interested in organizing until this past summer.

“Honestly, it was more of when the protests sparked up where I felt most welcomed because of all the kind words that were sent by my friends and those kinds of things,” she said.

Additionally, Gabriel said bringing awareness was what led her to organize the protest in downtown Carmel.

“Honestly I’m surprised that there hasn’t been (an equity and inclusion officer) already in place earlier,” she said. “That it had to take literal death threats to have someone like that to be in place for schools, but better late than never I guess.”

However, although Gabriel said she’s frustrated by Carmel’s speed on tackling inequity, she said she is still optimistic.

“More of it is just going to be letting Black voices continue to be heard,” she said. “Even (now) in our school, there is the equity team (we are) trying to figure out—(we are) trying to deal with the death threats that happened at the beginning of the year. I guess (it’s) more of a high school thing, what’s going to happen in the future. I think that there will be change that continues to happen (at this school) because there are people that want change (at this school).”

Click here to read an opinion piece on how “All Lives Matter” detracts meaning from “Black Lives Matter.”

With this, according to Wu, the sudden cancellation of in-person classes stripped her from the opportunity to say goodbye to her graduating friends.

Wu said, “When we first went into quarantine, a lot of my friends then were graduating, and we knew we had a couple big concerts coming up that we were super excited for. It was really sad to not be able to have that sense of closure and have to abruptly be like, ‘Oh, I’m never going to see these people again; they’re all going to college.’”

Additionally, according to Wu, the still-virtual classes have continued to create a sense of disconnect within the orchestra.

Wu said, “It’s kind of sad. (The last time) I saw some of them was through (IU String Academy. Now) we don’t talk as much. The biggest thing was that working in a group at that high level of intensity really brings us closer together. I’m sad that we lost that in March and still don’t have it.”

Furthermore, with the COVID-19 cases rising, the orchestras at CHS have also had to make changes, including converting to virtual concerts.

Wu said, “(In-person concerts were) a great way to feel like you’re wrapping something up and getting that sense of accomplishment. But I’m glad that our directors are taking COVID-19 so seriously and keeping us all safe.”

Additionally, according to Wu, there are both benefits and drawbacks the all-virtual lessons have brought.

“I’m definitely noticing I do have more time to practice, but in-person classes and having the orchestra together (are) important to my development and anyone’s development as a musician and not having that (is definitely) a drawback,” Wu said.

Click here to read a story on how violinists trained despite COVID-19 canceling rehearsals at the beginning of the pandemic.

For senior Alana Blumberg, her family’s dynamic completely changed during the lockdown period in March.

Blumberg said, “Before quarantine, I would do a thing or two things around the house, but in March, I definitely took up more. Overall, I’m glad I did because I feel like I got closer with my siblings during quarantine because it forced us  to spend more time together and with bond.”

However, since school has started once more and most normal activities have resumed, Blumberg said her home life has since changed.

Blumberg said, “During quarantine, I got really close to my sister. However, with her at (IU), I definitely feel like we have drifted a little bit.  I got to stay with her at her house in Bloomington one weekend a couple months ago and that was a lot of fun to get to see her in-person and we send TikToks back and forth, but I definitely miss her.”

Additionally, Blumberg said she finds it challenging to balance school with the responsibilities she has at home.

“With school back in full swing, I just feel like I have less time,” Blumberg said. “Even prior to picking up (more responsibilities), it was a little bit of a struggle to keep up with everything, but especially now with everything going on and having to make sure that we have the necessary supplies at the house already, it is a little bit more of a challenge just to keep up.”

With this, Blumberg said she recognizes the strain school has put on her home life and has recently prioritized her familial responsibilities once more by deciding to switch from hybrid to all-virtual learning in order to have more time with her family.

Blumberg said, “I think that definitely staying home and focusing more on my future and the at-home needs are more important than going to the same school I’ve been at for a long time, and I feel like during this time (family) is what I should be focusing on.”

Click here to read a story about how family dynamics originally changed at the beginning of the pandemic.

As many know, when the COVID-19 pandemic hit, it caused professionals from all parts of the medical field to come together to deal with the increased demands and patients in the hospital.

However, according to junior Tiffany Yeh, what many people do not  understand is the toll COVID-19 takes on physicians’ home lives, including hers, as Yeh’s father is an oncologist.

Yeh said via email, “I constantly worry about (my dad being) exposed to (COVID-19). Even though this pandemic has been extremely rough, my dad risks his life to help other people. I’m very proud of his bravery but I do worry for his health and safety a lot.”

According to Yeh, these statistics are what makes her nervous about her dad potentially being exposed, but they help her understand her dad’s bravery.

“It is a very scary time to be a doctor. I am always worried that my father will be exposed. Him risking his life despite this has made me understand that it is important to be brave,” Yeh said. “Because of the pandemic, our lives have been limited significantly. He always says that despite these circumstances, it is important to remain brave and know that you as an individual can help slow the spread of the pandemic by social distancing and by wearing a mask.”

Click here to read a story about student’s thoughts on nursing and the medical field with COVID-19 making medical careers more demanding.