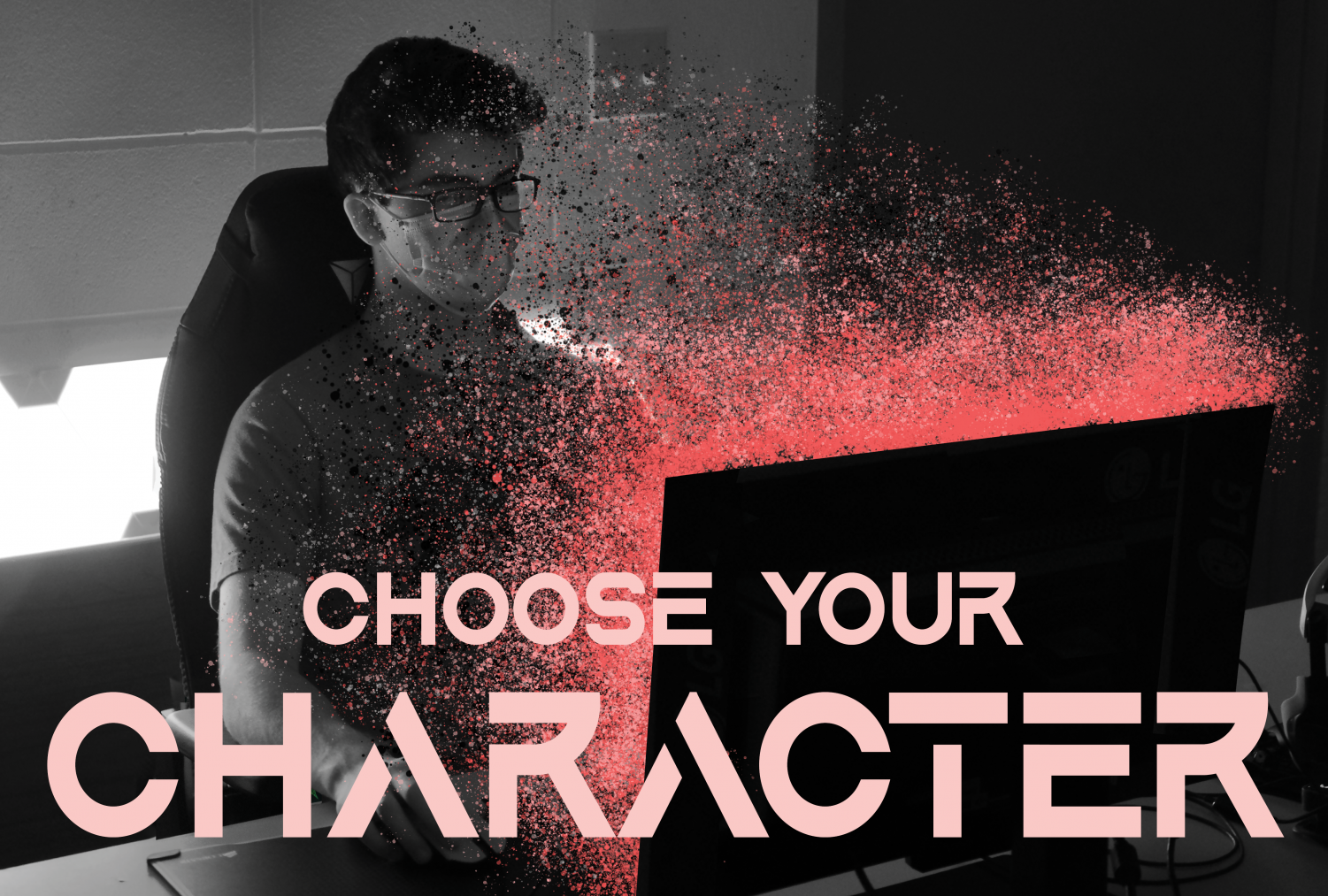 Yellow is sophomore Tatum Siebert’s happy color. For her, wearing the color makes her feel like a ray of sunshine, and it’s how she expresses happiness and contentment. She said fashion has always played a major role in her life, but in recent years she began to put more time and effort into building her style, and along with it, her self-confidence.

“(When I started exploring fashion,) I felt like I was expressing who I wanted to be, and it definitely built my confidence because it showed that yeah, people will look, but nobody really cared that much,” Siebert said.

She said she has continued to experiment with her fashion and that isolation due to the pandemic actually impacted her approach to fashion for the better. As an only child, Siebert said she spent a lot of time during quarantine completely by herself, and it caused her to do a lot of introspection about herself and her self-expression through fashion.

Siebert’s more frequent use of social media to display her fashion during quarantine is a phenomenon that has been present across the globe—especially with the rise of digital communication through programs like Zoom, many people have seen more digital influences on their lives and the way they express themselves.

Sophomore Kristina Zerbinopoulos said she noticed this impact not only in her day-to-day routine, but also with how it changed the fashion industry.

“I think it’s really interesting to see how digital fashion is becoming more prominent in promoting and advertising fashion and clothing, and there’s a lot of new software that’s being used to express this,” Zerbinopoulos said. “Influencers are kind of using this digital fashion in a new way to advertise themselves, put themselves out there and show new clothes, so I think it’s definitely something interesting that’s evolving and shaping the fashion industry.”

Last November, cosmetics company L’Oreal launched its Signature Faces digital makeup line, a series of filters available on platforms like Snapchat, Zoom and Google Hangouts. The hyper realistic make-up allow users to don a full face of product in seconds with the tap of a screen, a prime example of how digital technology has transformed the world of fashion, makeup and self-expression. Cyber fashion brands like Dress-X and Tribute have created lines of fully digital clothing for Instagram-ready photos—clients purchase the digital pieces, upload photos of themselves and receive photos of themselves in which the digital piece has been edited onto their body. Especially with COVID-19 restrictions on the analog fashion industry and surges of social media use during lockdown, digital wardrobes have become less of a science-fiction fantasy and more of a reality.

However, the rise of digital fashion and makeup has not been without opposition. Though both Zerbinopoulos and Siebert said such innovations can open doors to new possibilities, some fashion students, like senior Marissa Cheslock, said they still prefer the idea of creating and wearing physical garments as a means of self-expression.

“I guess I don’t really like the trend of digital fashion, because what’s really the point of it? It kind of adds to the fakeness online and in social media. It’s definitely an interesting way to use technology, and it’s an art form, I would think,” Cheslock said, “but if every single person used it, I don’t think that would be realistic.” 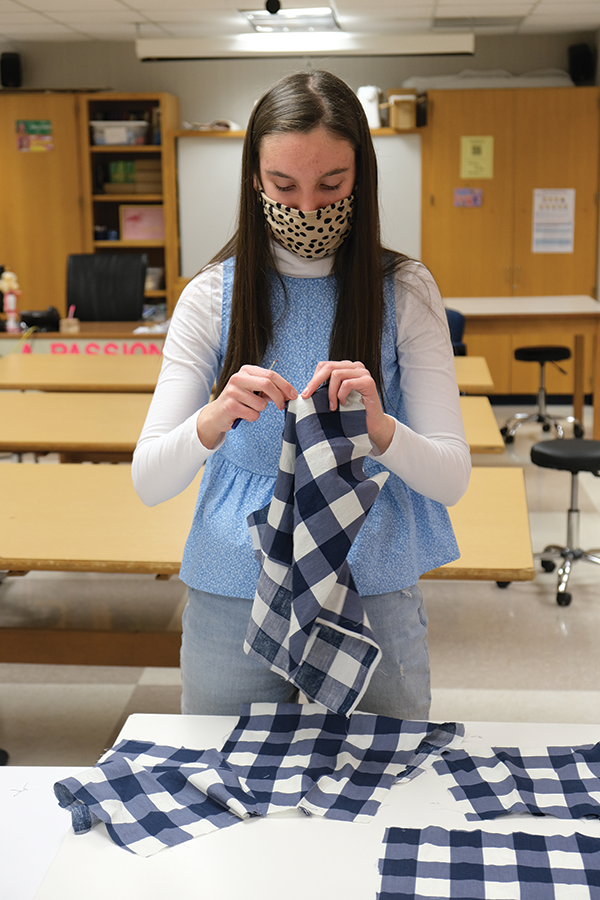 Digital self-expression, however, is not only limited to the fashion and makeup industry. Video games like “Minecraft,” “Animal Crossing” and “The Sims,” which have all seen spikes in gameplay during the pandemic, provide players with opportunities to world-build and customize their own characters. Though this recent popularity of video games can be attributed to isolation and stay-at-home orders, self-discovery and self-expression through digital games are not new concepts. In a 2002 study published in the Journal of Applied Psychoanalytic Studies, researchers found that those who used a video game avatar discovered new elements about their personality because they could explore their identity in a separate representation of themselves.

According to Dylan Gentilcore, eSports director and English teacher, games with customization features give students both a safe space to express themselves in a way they might not be able to in real life and a creative outlet.

“That’s why a game like ‘Minecraft’ is so popular. Games in which you can go in and create stages of any sort, games where you have a lot more modularity over the way that your character looks, deeper character customization or the ability to dye different pieces of gear or to even mix and match different parts—stuff like that is really important,” Gentilcore said. “It scratches a creative itch that really gets stifled; a lot of times growing up, you have so little agency in the world. You feel like your creativity and your curiosity are curved at every corner because we’re trying to get you to focus on certain things, so that sort of sandbox environment is huge.”

Although many games are largely customizable, according to Dylan Boyer, eSports member and junior, there are lots of games where customization does not affect gameplay and is mainly a way for the player to make their experience more individualized.

“Whether you want to be something as cool as a caped hero or as silly as a random pink blob of color,” Boyer said via email, “the sky is the limit with games like (“Minecraft,” “World of Warcraft,” or “Skyrim”). In MMORPGs (massively multiplayer online role-playing games) and Skyrim, for example, these characters can be customized to great detail, leaving an immense amount of room for expression through their character creation.” Click here to view a graphic on Cyberpunk, a new customizable video game.

Although the customization being presented in some games may not largely affect gameplay, Gentilcore said he thinks the availability of customization in games is beneficial to players and can improve their overall gameplay experience.

“I think that’s a core component of gaming to a lot of people, that mode of self-expression,” Gentilcore said. “And now a lot of the games, especially the games I gravitate toward, have that in some degree, whether it’s as small as changing a profile picture or creating a character that represents you in some capacity. It could be a human representation of yourself; it could be more of a monstrous or animalistic avatar or player character… but it gives you the opportunity to start with that character and progress it over time and make changes and really develop this new sense of identity.”

Siebert said although she does not play a lot of video games, the idea of being able to express herself in a new way would be something that could draw her to trying a new game. Whether it would be through creating a fantasy avatar or shaping the environment around her, she said the possibilities presented through digital customization intrigue her.

“I think that customization in games is such a cool way for people to have an outlet for creativity and to express themselves, especially when they feel like they can’t in their personal lives,” Siebert said.

Still, although Siebert said she liked the idea of expression through video games and the sentiment behind digital fashion, she said she thought there might be some potential drawbacks to digital alterations to one’s appearance as well, if not used responsibly.

“People are presenting themselves in a way—like if it’s on Zoom—that’s not really what they look like. If you’re changing your appearance and saying that that’s how you naturally look, then it can affect the general view of beauty because then other people are like, ‘Well, why don’t I look like that?’” she said. “I think that there’s a fine line because of course there’s always that argument with makeup where people are like, ‘Oh, you’re false advertising.’ But I think it could be a really great way for people to express themselves without having to invest as much, to be able to dip their toes in the water (and try out new styles).”

Zerbinopoulos said she is considering going into fashion as a career and said digital fashion is something that would interest her.

Cheslock also said she is interested in a career in fashion, and while she said she doesn’t know exactly what she wants to do with her future degree, she said she would prefer to work with textiles than digital software.

“I’m going into fashion (as a career), and I’ll probably not (work in digital fashion), but it depends on how it changes over time,” Cheslock said. Click here to read a story about students expressing themselves through fashion.

Similarly to how companies make money off of digital fashion, Boyer said games make a lot of money off of customizations and selling other additions to their game.

“Despite these ‘skins’ being a platform of expression for some players, they are limited to only those who can afford it,” Boyer said. “On the other hand, though, these cosmetics have almost no effect on the game’s playability whatsoever. I find these a benefit in most cases, since it would give the players who can afford “skins” an unfair advantage. It maintains the game’s integrity by keeping skins as something purely for visual appeal.”

Ultimately, however, having access to any kind of customization or creative freedom is, according to Gentilcore, generally beneficial. For him, encouraging young people especially to continue their pursuits in creativity and self-expression is what gives them a sense of agency in their lives.

“I am a person who typically views any mode of expression that doesn’t cause harm to other people as inherently good,” Gentilcore said. “As long as my expression doesn’t put others in danger or make them feel threatened or spread some sort of message of hate, then I think it provides a great good to society. We have insecurities and different issues that we’ve packed away in ourselves that aren’t always visible to others and may not even be visible to ourselves, but we can find ways in which we are able to let out some of that.”