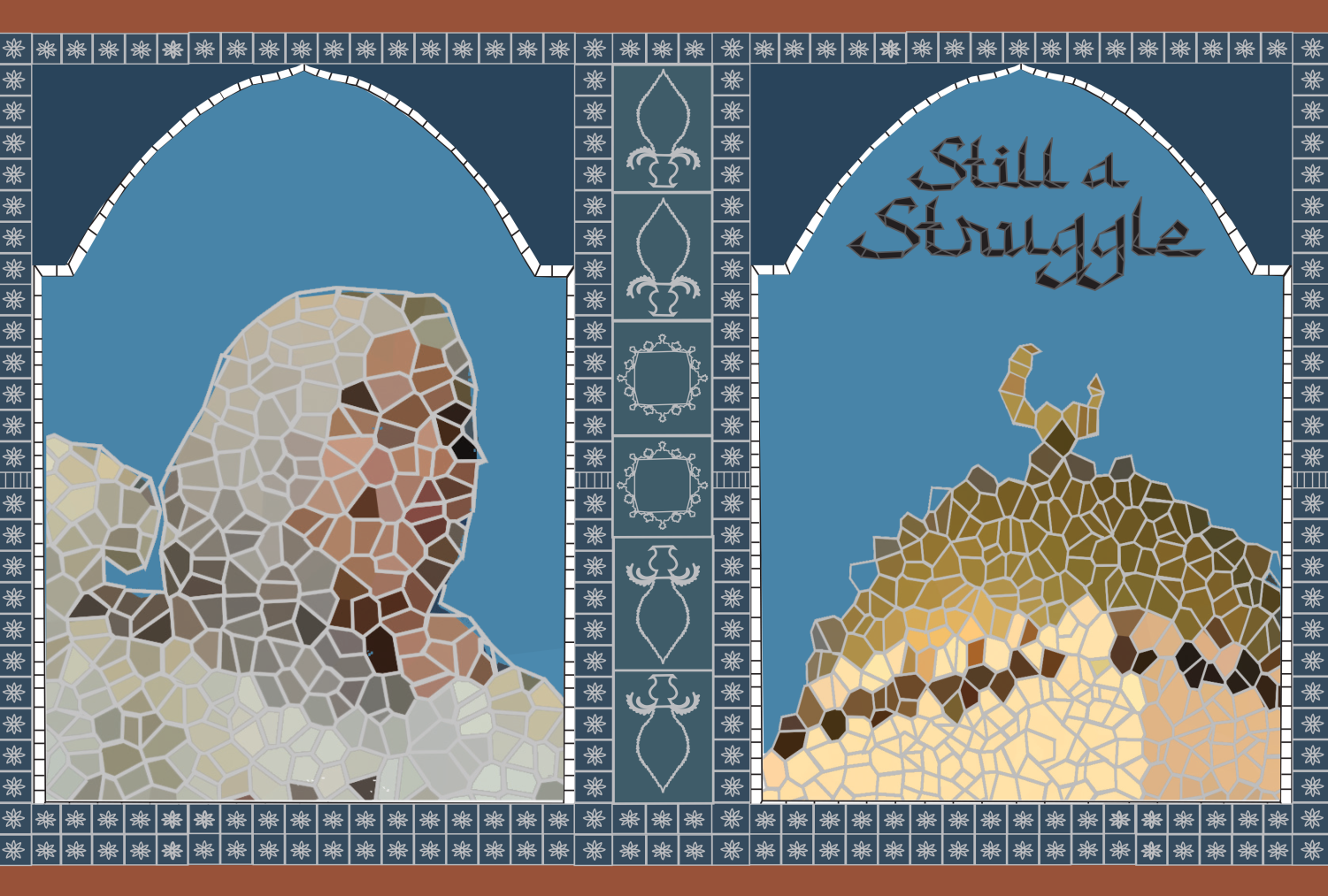 Freshman Mariam Morad adjusts her hijab during class. The hijab is a head covering that is worn by some Muslim women and is typically worn in public.  For Morad, it reminds her of who she is: a Muslim.

According to the Pew Research Center, Morad is one of 3.85 million Muslim Americans in the United States in 2020, making up just 1.1% of the U.S. population. Morad said she has felt discrimination against her because of her religion before.

“So I started wearing the scarf on July 30 of 2021, and I was friends with people in middle school and some people actually don’t talk to me anymore because I wear the scarf.”

Morad is not alone.

According to a 2017 Pew Research Center, study, 48%  of Muslim American adults said they had personally experienced some form of discrimination because of their religion in the previous year.

In addition to people’s reaction to her hijab in middle school, Morad said she has had some negative experiences at this school in conjunction with her religious identity as well.

“Whenever someone gives me a dirty stare, or like, a teacher isn’t helping me, I’m like, ‘Why aren’t they helping,’ you know? And obviously, I don’t want to assume that it’s because (I’m Muslim) and because of the scarf, but at the same time it’s still a thought in the back of my head because I’m different from everyone else in my class and its happening to me.”

“One time, my dad was going to Canada to visit some family. It said on his passport that he went to Turkey, so he was stopped for 10 hours and interrogated for a long time,” he said. “He was being asked why he kept on going to Turkey and Pakistan. For one, he has family in Pakistan because we’re Pakistani, and Turkey because he had business trips. But they refused to listen to him because of his name, and how he looks.” 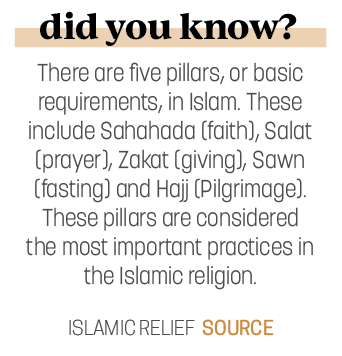 However, sophomore Mikael Aqeel said he has had a different experience, with more positive experiences as a Muslim in Carmel and has not experienced Islamophobia.

“The people I’ve been around have been great to me,” he said. “I know when I have to fast for Ramadan, my coaches are very nice and understanding about what I have to do, and they help me get through it efficiently while helping me become better.”

“Muslims were way more front and center in the media after 9/11. They were much more vilified (then).”

Morad said like many more prominent religions in the United States, Islam is monotheistic.

“We believe in one God. There are foundations, the five pillars of Islam, that make up the basis of the religion,” she said.

According to the Metropolitan Museum of Art, the five pillars of Islam are profession of faith, prayer, alms giving, fasting during the holy month of Ramadan and pilgrimage to the city of Mecca if finances and health permit it.

Asim’s sister, freshman Sara Syed said the school is contributing to Islamophobia by associating Islam with 9/11.

“I’m in AP World History. When they talked about Islam, it was during the week of 9/11. And all we did was watch terrorist attack videos,” she said. “And it’s so stupid, because they’re just putting that image into everyone’s head that we’re terrorists.”

Morad said one of the struggles of being Muslim is finding a place to pray during the school day.

She said, “(A Muslim friend of mine) has tried to get me to pray (at school), but I can’t. I just don’t want to go to the nurse to pray, but I do pray. I just pray at home. It’s weird to pray in the nurse’s office.”

Sara shared the same concerns, saying the school does not provide a proper space for Muslims  students to pray in.

“We have to pray­— it’s mandatory to pray— but we can’t because we are in the middle of school,” she said. “(The school) doesn’t provide that safe space for Muslims to pray at school, which is really annoying because there are so many Muslims and they don’t accommodate us. I have to pray in a small little supply room. It’s a closet basically.”

Prayer is important, especially for Muslims during the holy month of Ramadan. Ramadan, a month where Muslims fast to become close to God, will begin on the night of April 2. The first fast will begin on April 3. According to Britannica, Muslims fast for several hours a day and refrain from food, water and immoral behavior. Morad said she loves this month and is looking forward to it.

“I love Ramadan, even though everybody’s like, ‘Oh my god, you fast?’ We usually have people over every day when we break our fast or when eating (in the morning). It’s so fun when we’re together. I guess fasting at school isn’t the most fun, but I love the month of Ramadan.”

Morad said there is a lot of misinformation among non-Muslims about the Islamic faith.

“When people see me, they automatically know I’m Muslim. When they see me wearing a scarf, they’re like, ‘Oh my god, that must be so hard for you. I can’t imagine that. Why are you doing that to yourself?’ They think that it’s forced upon me, that I have to be so serious, that (the religion) is so strict and I can’t bend the rules or anything,” Morad said. “Most people don’t know that I choose to put the hijab on,” she added. “They’re like ‘You chose to do that?’ Yeah, because I know the reward in the end and honestly I don’t really care what people think about me.”

With the Al Salam Foundation working with city officials to build a mosque in Carmel, Sara said she thinks the mosque would be beneficial to the community.

“A lot of (Muslims) live in Carmel. But since the mosque that we have is so far away, it’s hard to go to every day, which we’re supposed to.”

However, Sara also said the mosque plans are facing a lot of opposition.

“In the hearings, a lot of people were opposed to the mosque being built,” he said. “I don’t really see a reason why they should be opposed (to the mosque)” she said. “It’s not like we are doing anything bad, we are literally just praying. And we have a ton of churches, so I don’t  see why it’s bad. I feel like [the opposers] are just racist.”

Asim said the opposition toward the mosque comes from misinformation surrounding the mosque.

“I was actually at the hearing when (officials) were trying to get the (construction of the) mosque approved,” he said. “One person said they don’t want the mosque because during Ramadan, (Muslims) do loud dances and chants. But in reality, our prayers are silent. The Imam, or pastor who leads it, has a microphone that is only heard inside. But [the opposer] thought it was all dancing and partying, which is nothing at all like that. He just wasn’t educated.”

Research suggests that many people in America are uninformed when it comes to Islam. In fact, according to the Pew Research Center, 52% of Americans said that they knew ‘not much’ or ‘nothing at all’ about Islam.

Morad said people should ask more questions asked about Islam in order to educate themselves about the religion.

“I think people just don’t talk to me about (my religion very much). They don’t ask questions, so they just have their own opinions and thoughts,” she said.

“I would suggest that (people) go to their local mosque and meet some Muslims there,” he said. “Maybe come to our lectures, more particularly the Friday prayer to see what Islam is about.”

Aqeel said the best way to stop Islamophobia is to educate oneself.

“Educate yourself about what Muslims and the faith truly (are). It’s a peaceful religion, and none of the violence around the world is directly linked to Islam,” he said.

“(The violence) doesn’t speak for the majority of the people. Also, be more understanding. Misconceptions of each faith is what divides people.”

However, Karimian said she feels Islamophobia has decreased over the last couple of years.

“Nowadays, (Islamophobia) has really calmed down. Now, there are many other issues that are the focus, whether it (is), Republican versus Democrat, that’s a big thing,” he said. “And also, now the big thing is about Russia and Ukraine. Muslims are not in the forefront of the media (anymore).”

Morad agreed there are people who are helping to break down the problem of Islamophobia. 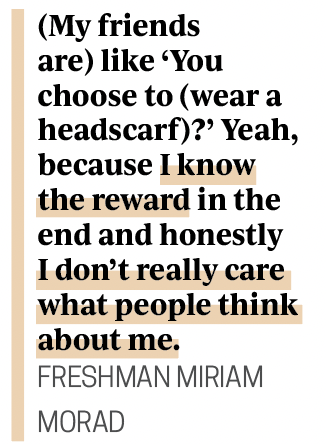 “Recently, in social media posts, I’ve seen a lot of people standing for and with Muslims in certain situations and that’s good.”

Aqeel said he thinks one of the  best parts of his Islamic faith is the community it has fostered.

“The greatest aspect of Islam is the closeness that all of the people in the community have with each other,” he said. “Muslims refer to others as brothers and sisters. All of us are like one big family, always welcoming people with open arms. (Other Muslims) are always there when someone needs help. I just think that close bond that everyone has (within Islam) is a great thing to have in your life.”

Asim also said from his experience, he thinks the Muslim community is supportive of one another.

“It’s a really tight-knit community. It’s a safe space, where if you need anything, you can reach out to anybody,” he said. “If there’s ever a family who lost a loved one, they would get so much support and whatever they need, anyone will be there for you. So it’s really nice to be in that community.”

Even in the face of experiencing Islamophobia in Carmel and in the world, Morad said she is still proud to be a Muslim.

“Overall I love Islam,” she said. “I love being a Muslim.”

Karimian said, “It’s time for us to really just get out there and let the world know who we are, what we believe and make them familiar with (our community) and make them feel good about (Islam).”