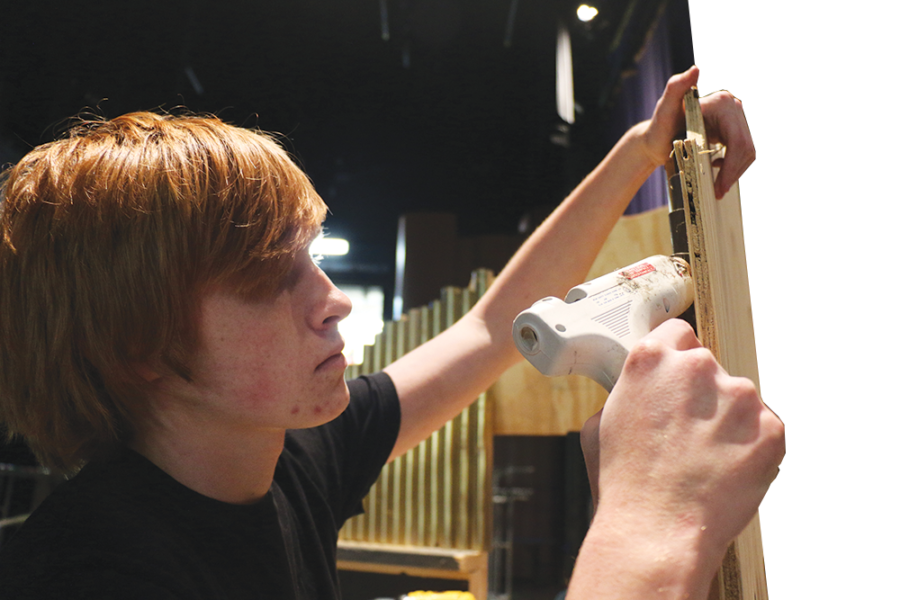 Jack McDougall, technical crew member and junior, glues a pipe to the prop organ. The organ is the Phantom’s instrument of choice in the musical.

More than eight months ago—on Aug. 12, 2016, to be exact—the CHS Spring Musical Twitter account officially announced that this year’s spring musical would be “The Phantom of the Opera.” The post said, “This is going to be a show of epic proportions!” Not long after this announcement, Christopher Plunkett, auditorium director and technical theater teacher, began planning props for the show.

“I’ve been planning this all year,” Plunkett said via email, “and I still wish I had another month or so.”

While “Phantom of the Opera” is best known for its powerful music and challenging vocals, it is also widely regarded as one of the most technically difficult musicals of Broadway.

“‘Phantom’ has a lot of technical elements that are necessary for the show to make sense,” Kelin Murphy, student technical director and senior, said. “So it’s important for (crew) to be on their game and to know what they’re doing to make the show run smoothly.”

“With shows like (‘Phantom of the Opera’), it’s immensely important that we do our jobs correctly and effectively or else the production might end up feeling flat or uninteresting,” Snow said. “Most of the time our (spring musicals) are tech heavy and due to the time period ‘Phantom’ is set in, we’ve had to put much more effort into getting the atmosphere of the production just right.”

Plunkett also said the technical challenge is added to by the fame and fan-favoritism of this particular show. The way all of the props are used in the show is well known to fans, he said.

“It’s so well known and beloved that if you mess it up, people know and are angry about it,” Plunkett said. “There’s so much that goes into putting on a good production of (‘The Phantom of the Opera’) and it needs to be done well.”

Despite the high-pressure nature of this show for the crew, Plunkett said he and the crew are excited to take on the challenge.

“The kids are really excited to finally be building it and not just talking about it,” Plunkett said. “Personally, this was a bucket list show of mine that I’ve dreamed of producing for the past decade. I never thought I’d get the chance, but here we are. It’s a labor of love … because so many of us in the program love ‘Phantom.’”

Plunkett said he is most excited about the elements the crew is creating for the first time as a part of this show. These projects require a lot, both in terms of manpower and materials, according to Plunkett. 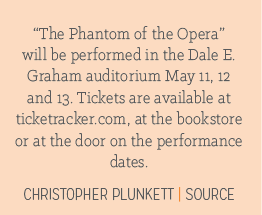 “We’re building a robot, 25-foot platforms and rethinking how the production is done,” Plunkett said. “My goal is to stay true to the original work while thinking outside the box and creating a unique experience. Since ‘Phantom’ takes place in a theatre, we’re going a little meta with it. The parts that take place in the theater utilize the whole theater.”

Murphy also mentioned several other new elements to be in the performance, including a dropping chandelier and a remote-controlled boat large and sturdy enough for two actors to sit in. Snow said many of these products are already almost finished, helping to put the crew ahead of its schedule for building.

“Though we’ve only just begun working on it, I can tell you with 100 percent certainty that this will be the most unique and breathtaking production we’ve ever done in these past four years at CHS,” Snow said.

Plunkett said he agreed with what Snow said.

“Everyone involved with this show is putting their best foot forward and creating an awesome and unique experience,” he said. “It will be awesome.”