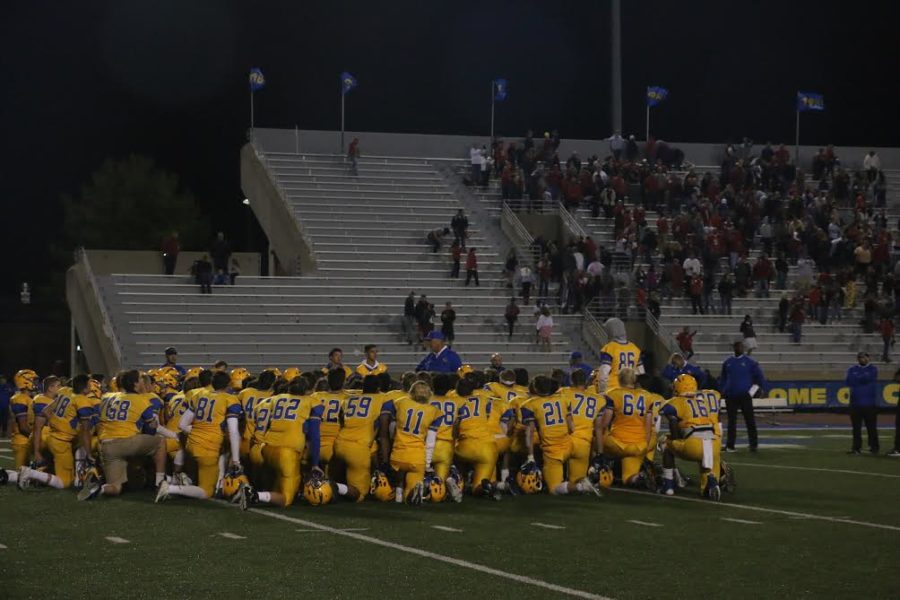 The football team huddles before the game starts. Schumann said he playing for the team brings a sense of brotherhood.​

The Biggest Game: Football Players, Coach Reflect on the Importance of the Homecoming Game

On Sept. 15 at 7 p.m., CHS will have its annual Homecoming game against Lawrence North.  Usually remembered as one of the largest of the year, the Homecoming game naturally results in mixed feelings because of differing aspects in the game compared to regular seasonal ones.

One aspect is the degree to which increased pressure is added to the players. According to quarterback and senior Nicholas Leinbaugh, there is indeed more pressure simply due to the fact that the crowd and spirit is amplified.

“In the Homecoming game, we want to win a bit more to show off to all of the supporters who come,” said Leinbaugh. “Because there are more people, it adds more pressure on us to win.”

“The Homecoming game is definitely different in terms of the community. It’s a whole different level of people coming together to support our cause,” said Clouse. “I value every game as the most important, but I do see that there is a special obligation to win this game for the unique community that this game brings.”

“I don’t think the Homecoming game adds more pressure. In my opinion, each game involves its own set of dynamics depending on who we are playing. This year, we are playing Lawrence North, a very good team that beat us last season. I’m sure our team will be more focused on those factors than the event of Homecoming,” said Hebert.

Besides increased pressure, however, the football team’s opinion is uniform in other aspects, such as how the Homecoming game does not shift any notions or structure of practices leading up to the game.

“We always take one step at a time during practice and will always have a common goal of perfection,” Clouse said. “Every game is treated like the biggest game of the year, and there is only one type of practice to prepare for that type of game.”

Going off of what Clouse said, Leinbaugh confirms that mental attitudes toward and structure of practices leading up to the Homecoming are not any different.

“There aren’t really any changes just because the Homecoming game is coming up. We have a set routine every practice and approach each game in the same way.” Leinbaugh said.

Hebert agrees with Clouse and Leinbaugh, as he tries to ensure that his players do not develop the idea that the Homecoming game is different from a regular game during practices.

“We don’t talk about Homecoming as being any different than other games. In our conference, every game is important and extremely challenging,” Hebert said.

At the end of the day, it would be impossible to say that every member of the football team feels the same way about the Homecoming game. As for Leinbaugh, however, he makes it clear that he wants to give meaning to the spirit of the Homecoming game.

“I know the Homecoming game is going to have more people. In that sense, it will definitely become not necessarily more physically or mentally demanding but more emotionally demanding.” Leinbaugh said. “I want to make everyone who comes out that night realize that their support was not in vain.”