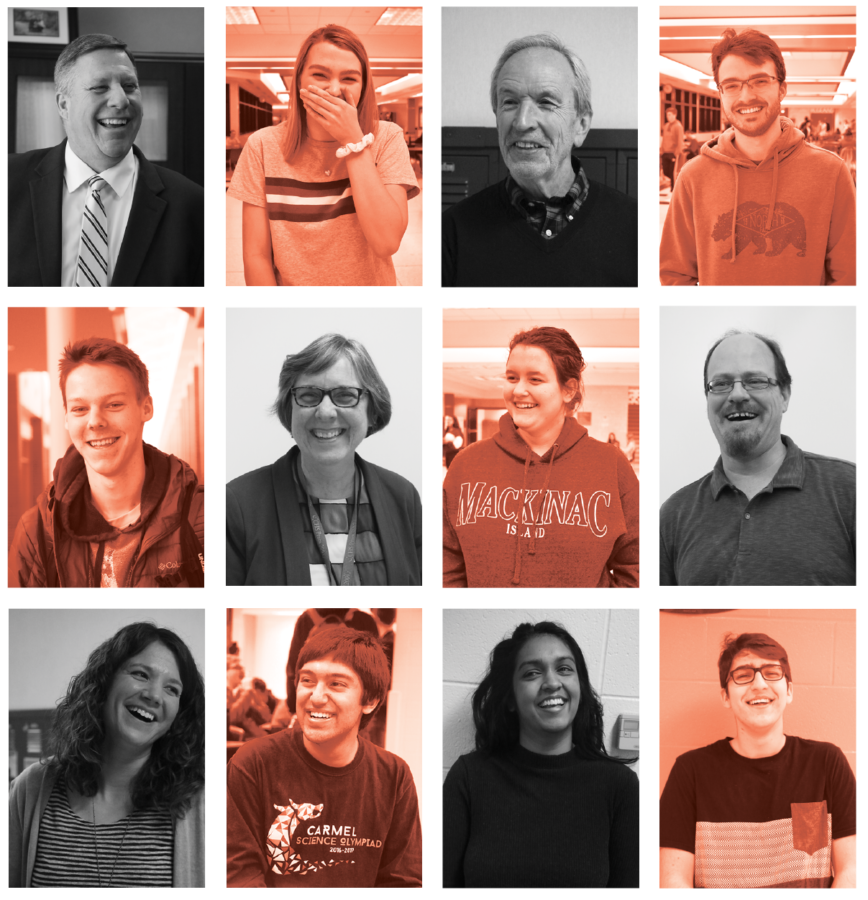 I Don’t Get It!: In honor of National Humor Month in April, people express ideas regarding generational differences in humor

As Kyle Fleckenstein, ComedySportz member and junior, stands on stage during a ComedySportz match, he draws inspiration for his jokes from popular and well-known events occurring in society. For example, Fleckenstein said he plans to reference “memes,” which are virally transmitted cultural symbols or social ideas, in his ComedySportz match tonight.

“I really like memes because everyone has their inside jokes and ongoing things that they have with their friends. Memes kind of feel like inside jokes with everyone where everyone in the world can laugh and join in,” Fleckenstein said. “The ones that don’t make sense are extra funny—it’s the sense of inside jokes only for the people who have been around. It’s like making a meme about memes and it’s even funnier.”

April is National Humor Month, a month that promotes laughter and joy. According to Kai Hanno Schwind, a psychologist and associate professor based in Oslo, Norway, many aspects of humor are universal and cross-cultural. Schwind wrote his doctoral thesis on transnational format adaptations of the sitcom “The Office,” analyzing how comedy formats adapt for different countries and how humor in general travels across cultural contexts and focuses on humor in media, satire, what makes humor controversial and the ethics of humor.

Schwind said via email that social sciences have agreed on three classic humor theories: “superiority theory,” “incongruity theory” and “relief theory.” According to Schwind, the superiority theory claims humor is derived from commentary on social hierarchy which helps political satire. The incongruity theory claims that humor occurs when an expectation is created but not fulfilled, going in a different direction that surprises the audience. This theory explains some forms of absurd or surreal humor. Lastly, the relief theory states humor offers people possibilities to deal with feelings, topics and anxieties they usually fear or make them feel insecure. Through humor there is the possibility to articulate feelings about those topics and also make them less scary.

The various current styles of humor depict the incongruity and relief theories, which are especially prevalent in the sense of humor of Gen-Z.

According to The Michigan Daily, Gen-Z humor is a branch of “neo-dadaism,” which is the resurgence of an absurdist style of art, but also humor, known as “Dadaism.” Dadaism is an art movement from the ’60s  referred to as “anti-art.” Absurdist humor is a type of humor that is defined by deliberate violations of reasoning, producing behaviors that are often illogical.

Sophomore Annie Kim said she believes she has absurdist humor and that Gen-Z humor is quirky and random, but that is what makes it funny.

“There’s this popular saying where they say, ‘random equals funny,’ which is really true in our generation’s sense of humor. I’ll spend hours just looking at random things I find and laughing at them. Sometimes, they don’t even make sense, but I’ll still laugh at them,” Kim said.

Fleckenstein said he has also seen changes in his sense of humor throughout time and has had to adapt his ComedySportz routines over time.

“What we do and say often evolves with society and with the people,” he said. “We get suggestions from people and we go off of that as well as the vibe of the crowd; you really have to evolve and adapt to whatever situations you might face.”

“Each team has their strengths and weaknesses,” Peterson said. “They change from team to team, but I think that’s just a personality thing. But at the same time, I think our team has evolved in confidence and experience.There was one year we couldn’t make up a one-line joke to save our lives and we lost every home match that year because the whole team was afraid of doing one-line jokes. There’s a game called ‘One Liners’ and you can do a lot of different ones, but (the team was) always afraid of coming up with something clever to say. They felt very self-conscious about it. We trained really hard the next year and coming up with stuff, and of course some kids graduate and we get new kids in. So it just kind of naturally evolves that way.”

“(How humor evolves) has something to do with the function humor has in our (societies). What we laugh about reflects what we’re dealing with at this point in time (personally, politically, culturally)—humor functions as a kind of ‘reality check’ of where we stand as a society, as a culture and/or as individuals,” Schwind said. “Simultaneously, we are always influenced by our social peer groups (family, friends, partners, co-workers, countrymen, etc.) and humor plays a significant role in that process. We laugh about what others laugh about. We laugh about the same cultural and social references. We use humor to differentiate ourselves from others, and, vice versa, we use it to align ourselves with others.”

According to CNN, Gen-Z is often compared to the “Silent Generation,” born between the mid ’20s and early ’40s due to the similar environments surrounding childhood. Additionally, both the Silent Generation and Gen-Z have similar senses of humor that express disillusionment with the state of the world.

“Some types of humor are cyclical because they respond to similar experiences, for instance, global wars, depressions and crises,” Schwind said. “This makes the study of political satire particularly interesting—how have we been making fun of authorities such as emperors, kings, presidents throughout history?”

Kim said she classifies her humor as “dark,” which is becoming a prevalent style of humor within Gen-Z.

Peterson said he believes dark humor is more of an acquired taste and not everyone finds it appealing.

“Well, it’s just a different style,” Peterson said. “It depends on what you find funny. Some people have it, like I have a darker sense, and sometimes I think dark humor is funny. My wife, not so much. She just (doesn’t) understand how you could, you know, think it’s funny that you’re dealing with death and poverty or whatever. I just think it’s a different way of looking at the world.”

Furthermore, Schwind said there were drawbacks when it comes to humor, dark humor in particular.

“The interesting thing with humor is, that it almost always has a flip-side. Making fun of someone can be traumatic for that person. Humor can be a tool for oppression. It can justify or ridicule physical violence. It can blur the understanding of issues that are discussed,” Schwind said. “Humor is, by nature, ambivalent, ambiguous and volatile and, as such, it may not always be the best choice in a conversation, debate or discussion. Always consider who you are talking and joking to and be self-reflective if you own the socio-cultural mandate to express and apply humor in a given situation or context.”

However, because so much of humor reflects in society, both Peterson and Schwind said there can be differences in humor between generations.

Peterson said, “Because I teach film, I’ll show like some old slapstick comedy or something like ‘The Marx Brothers.’ However, the Marx Brothers were very specific to (their) particular time period though so now they don’t really go over well with high school audiences.” 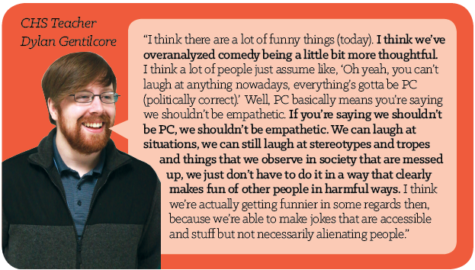 Additionally, according to Fleckenstein, the generational gap in humor may have been further emphasized due to a quick transition to technology.

“The way I see it, is that we as kids have really lived with the internet our whole lives and our sense of humor shows how comfortable we are with technology,” Fleckenstein said. “The older generations can’t really understand it because they didn’t have that connection with the entire world when they were younger.”

“I think it can (be) seen especially through the evolution of a meme. I mean, the cycle is so fast and a meme can start off, be clever and suddenly take off and grow to something that has giant appeal, and then just as suddenly turn into old stuff,” Peterson said. “And I think a lot of that has to do with technology now. The accessibility and the widespread broadcasting has really sped up the lifespan of (humor). If you think about how the media that your parents were exposed to was television—that was the mass media and kids don’t watch television anymore, which is just baffling to me, but that’s okay—I think there is definitely a generational gap which is emphasized through technology. I’m just speaking from my experience with my son. The things that he finds funny, like on Reddit—he’s on Reddit all the time—and he’ll show me something that just cracks him up, but I don’t see the appeal. You know, humor comes from your experience, your life experience, whether or not you can relate to it.”

Despite gaps in understanding, humor can be one way for people come together.

Schwind said, “Despite generations or social classes, there are some things that everyone loves and can find enjoyment from. Humor is a way to connect with people—to make friends and forge social relationships.”

“Anyone and anything can be funny,” he said. “You don’t always have to have something elaborate planned out. If you just say what is on your mind, you’ll find someone to laugh with you.”