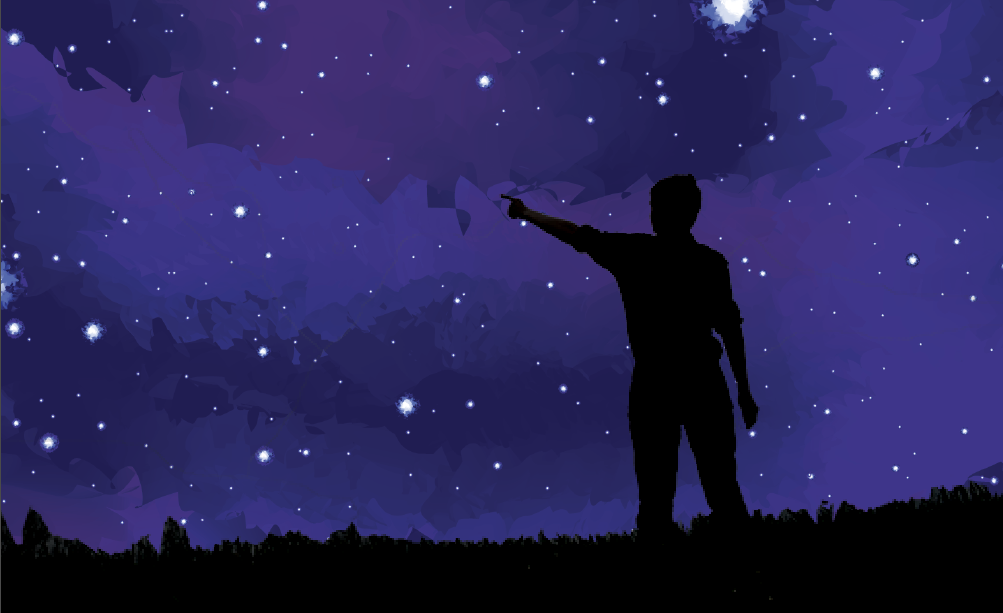 On April 11 of this year, a group of researchers working for the Event Horizon Telescope released the first-ever photo of a black hole, a celestial object from the Messier 87 galaxy. In October, scientists at the University of Bern in Switzerland plan to launch the Characterising Exoplanets Satellite in hopes of finding habitable exoplanets. In 2020, the National Aeronautics and Space Administration (NASA) plans to restart moon surface exploration in its “Moon to Mars” program, a revival from their moon explorations of the 1960s.

These recent developments in astronomy knowledge have become more popular, and some students at this school are beginning to take note. Gary Zhang, astronomy student and senior, said he’s begun to take interest in the subject.

“It’s fascinating, mind-blowing to see how all of these things could possibly exist in the universe and, not only that, there’s stuff that we can understand, stuff that is subject to scientific rules, that we can learn about and get and grasp and know,” Zhang said.

Zhang is a student in a CHS astronomy class, which is one of five classes offered at this school under the category of earth and space sciences, which includes classes like meteorology and geology which are not related to space.

Despite the relatively limited number of space-based courses offered, Andrew Sleugh, Planetarium Club president and senior, said these courses allow exploration of topics outside of the more traditional science classes taken by students.

“I think it’s pretty cool to not just be limited to the bigger classes like physics,” Sleugh said. “It’s more interesting than the standard classes. Kids who have more specific interests get to pursue those with the classes the school has, like genetics and zoology. You can really dive into those niche things.”

Keith Turner, planetarium director and science teacher, said teaching astronomy should become more prevalent in Indiana because of its fundamental basis compared to other sciences.

Zhang said he agreed with Turner, saying that before this year, he obtained much of the knowledge he had about astronomy primarily from outside reading and studying instead of school sources.

“I learned (astronomy) from science teachers who introduced astronomy documentaries to me and who showed me astronomical facts,” Zhang said. “Most of it comes from reading books on astronomy, cosmology, physics and documentaries on television, such as ‘Cosmos,’ which was pretty famous, as well as various others.”

Zhang also said learning astronomy is fundamental in how it teaches students to think scientifically.

“Part of the importance of astronomy is scientific thinking. Although astronomy students tend not to do experiments, when we think scientifically, we learn better about how to think about the world, not just astronomy-related,” Zhang said. “That critical-thinking aspect can be applied to other types of scientific disciplines. Since astronomy is mostly fact-based instead of very heavy-duty experimental, hands-on or thinking-based, it gives us a good introduction to scientific thinking and realizing our knowledge about the world comes from scientific rules.”

Even for people who choose not to learn the scientific principles, other aspects of astronomy impact them. In a 2014 article published by the Communicating Astronomy with the Public Journal, much of the technology used in space exploration and spacecraft can transfer to photography, mobile phones, satellite imaging and medicinal imaging. Even objects as simple as a car window or techniques used for medicine found their roots in astronomy research and telescopes. Moreover, this trend of improved astronomical technology is likely to continue, as President Trump allocated $19.9 billion to NASA in February, an increase of $370 million from last year.

Sleugh said this was the commonplace trend for technology used in space exploration and astronomical analysis, and students should acknowledge this because the technology will likely impact them in the future.

“If we want to get off Earth at some point, all of this technology is important. I think they’re using some other technology in the Tesla company,” Sleugh said. “It’s not just the technology but ways of thinking. For example, the reusable rocket jets. That sort of idea of reusing resources so you maximize your efficiency is shown in Tesla cars.”

As more of this technology gets developed, people may incorporate some of it into their everyday lives, but more likely most will continue towards space exploration. With the upcoming 50-year anniversary of the Apollo moon landings on July 24, some people might even think humans might bring back space exploration of humans to the moon and even to Mars.

In fact, this seems to be a growing sentiment, as in 2017, NASA received 18,300 applications to the astronaut program, an application pool that was triple that of the pool from just five years earlier.

Turner said, in spite of this trend, he is hopeful, yet skeptical, at the return of human space travel.

“Space exploration is so expensive (and) with humans it becomes a political deal. It’s extremely difficult to keep people alive in space,” Turner said. “We can do things a lot cheaper, and you don’t have to worry about the loss of human lives if you send robots.”

Instead of focusing on only space exploration, Turner said students should also focus on enjoying the vastness and beauty of the universe and space in general. He said interested students can find one of the easiest ways to learn about these things right here at CHS—at the school planetarium.

“Indiana has a rich tradition of teaching astronomy and using a planetarium along with it,” Turner said. “The thing that’s so cool about the planetarium here at CHS is it has a super amazing accurate star field. It’s based on actual images of a starfield. You’re not actually seeing the real night sky, but it’s very close to that.”

Turner said the immersive experience in the planetarium allows for a sense of wonder. According to Zhang, that feeling is the ultimate reason to learn astronomy. He said he appreciates the curiosity and fascination learning astronomy brings him.

“Astronomy gives us a sense of the vastness of the universe. I’ve heard it (has) been said that if humans could live a million years, we wouldn’t question the age of the universe. If humans could be a million meters tall, we would never question the size of our planet relative to the sun. The sun is massive in size, and it has a lot of mass. If humans could know what a million tons weighed like, we would never be astounded by neutron stars,” Zhang said. “That gives us a sense of wonder that there’s all this stuff that’s out there.”