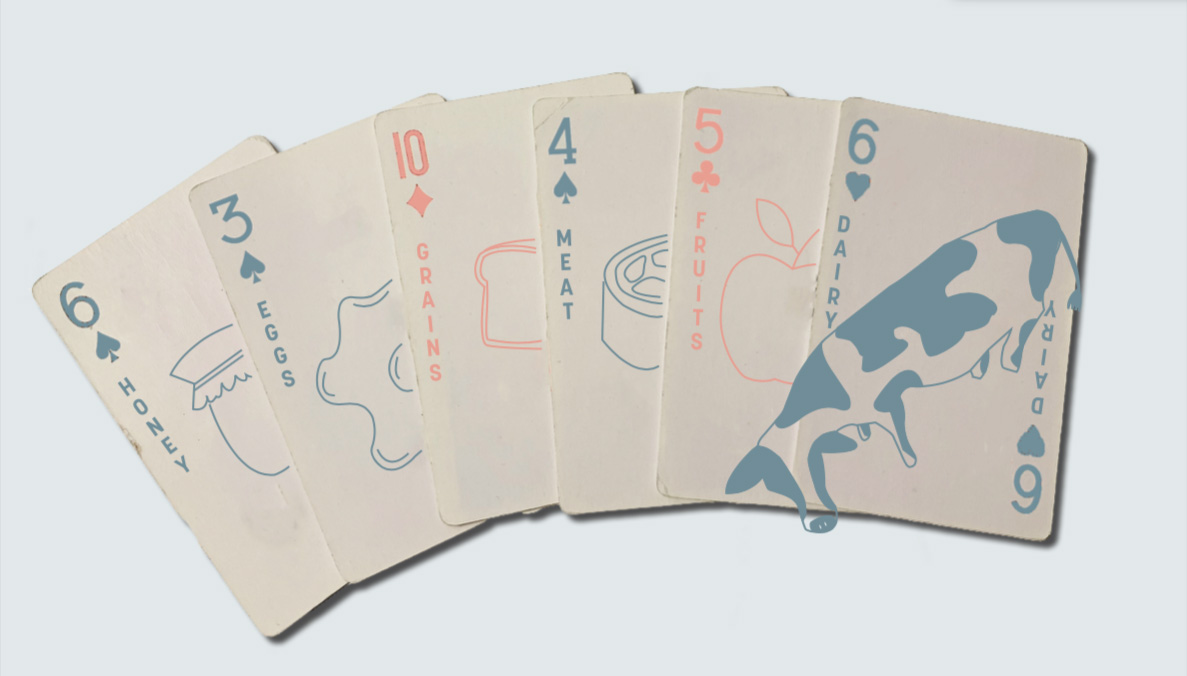 The day after Martin Luther King Jr. Day in the winter of 2018, junior Carmen Broadnax suddenly decided to never eat meat again. And not just meat, either. She’d chosen to cut out all animal-related foods from her diet, including dairy, seafood and egg. In other words, she’d simply decided to become a vegan.

However, was her decision really that sudden? Broadnax said that while she did become a vegan cold-turkey, she had actually contemplated going vegan for quite a while. In fact, the rise of veganism within America led to many people, including Broadnax, gaining greater exposure and understanding of the diet. So, it’s no surprise that eating more plant-based is a trend that’s been growing exponentially within recent years. In fact, according to Forbes.com, while only 1% of American consumers identified as vegan in 2014, that number grew by 600% within the span of just three years.

The rise of veganism has likely been complemented with the rise of animal rights as well, and the recent incident at the Fair Oaks Farm in Northwest Indiana has caused no

lack of controversy. According to Chicago Tribune and CBS News, Animal Recovery Mission released a video filmed by undercover investigators at the farm, which showed cows being abused by employees.

Broadnax said when she saw the Fair Oaks video, she was not surprised. She added that she had not only known about the ways meat and dairy industries treat animals for quite a while now, but also that her love for animals was one of the main reasons behind her going vegan.

“I went to a farm camp, and I saw how they treated their cows,” Broadnax said. “Farmers would tell us that it was normal and that the cows don’t feel anything. They would inject the cows with steroids so that the cows make more milk and say that they needed to be milked every day, that they enjoy being milked every day. But I’d never really believed it… I guess you (might) need to detach yourself from that because you don’t really have to care. Like, it’s not truly affecting you. But I can’t go throughout my life just benefiting off of other animals.”

In fact, many become vegan due to ethical concerns, and vegan and senior Kian Robinson, with an aunt who had worked for People for the Ethical Treatment of Animals (PETA), among other family involvement in animal rights, is largely in the same boat. Robinson, who has been raised vegetarian from birth, said a major part of his and his family’s support of eating such a diet was their ethical values.

“If six million dogs were killed every year for our consumption, I think people would be horrified,” Robinson said. “Scientifically, farm animals can feel pain, stress and fear. Pigs are smarter than dogs are, fun fact. So when somebody goes to a festival and they eat dog and people freak out about it, and I see no one freaking out about how pigs are treated, it’s just kind of—I wonder if they knew about how smart pigs are, if they care, or if it’s simply our interaction, and I think it’s the latter.”

Robinson added the agricultural industry’s effects go beyond simply animals, but have a significant impact on the environment too.

“The number-one cause of deforestation of the Amazon Forest is to make more land for cattle,” Robinson said. “Cattle also produce more methane into the atmosphere than the transportation industry, including all cars.”

In fact, his comments are supported by NASA’s Earth Observatory, which says clearing trees for agricultural needs is the top cause of tropical deforestation, and by a United Nations report, which says states’ cattle are among the biggest threats toward climate change.

However, eating vegan or vegetarian does come with its drawbacks as well, particularly on an individual level. Katie Hake, registered dietitian and fitness professional, said that while eating fruits and vegetables have significant benefits, cutting out other food groups completely or eating diets that aren’t completely balanced can often result in a lack of nutrients.

“When we do cut out any sort of food group—in this case, meat—a lot of people can become deficient in certain nutrients because they’re missing out,” Hake said. “In particular, vegetarians can be at risk for Vitamin B deficiencies. So it’s important that they understand, ‘If I’m not getting nutrients from this food group, am I supplementing it, either with another food group, or with an actual vitamin or mineral oral supplement?’”

Robinson agreed with Hake’s comments, saying Vitamin B-12 is a nutrient he can’t obtain easily as he doesn’t eat any type of meat or fish; however, he does supplement it artificially. He also added that it is a nutrient that can be found in fish, meaning pescetarians would still be able to consume Vitamin B-12 naturally.

Robinson added that vegetarianism and veganism can have lifestyle implications beyond just diet—in particular, pet food.

“I don’t have a cat or a dog,” Robinson said. “For when I’m older, I’m not sure yet whether I’m ready to make that decision. As far as feeding them, vegan food is not good for cats at all. They cannot survive well without meat. And for dogs, you have a little more leeway, but it’s not healthy for them to have a meatless diet. So as far as, would I be willing to buy that? I don’t know; I haven’t decided. So it has some other lifestyle implications that people might not consider before going vegan or vegetarian.”

For vegan-turned-vegetarian and senior Edie Wetzel, she said while there may be reasons dissuading people from going vegan or vegetarian, health should generally not be a roadblock.

“Protein is not as important as Americans make it out to be. The reason most Americans eat so much meat is because we have a huge meat industry. It’s a luxury item,” Wetzel said. “If you travel to other countries, meat is a privilege, especially in third-world countries. It tastes good, everyone likes it, so everyone (eats) it, but our bodies don’t really need it.”

In fact, Wetzel’s comments on how meats are often pricier than vegetables overturn a common stereotype surrounding vegetarianism, which is that it’s a more expensive lifestyle than a regular diet. While certain vegan or vegetarian products such as plant-based meats may be pricier due to the currently small size of the industry, according to both Wetzel as well as Robinson, eating more plant-based is generally cheaper in actuality.

“You can get a lot of foods in bulk, like nuts or beans, that will provide the protein you need fairly cheaply,” Robinson said. “A lot of people in developing countries have to eat plant-based diets. The foods aren’t necessarily more expensive, and if you aren’t a fan of the taste itself, if you look into ethnic cooking, especially Indian cooking, there’s a lot of really good options.”

Broadnax agreed with Robinson’s comment on vegan cooking, saying she had doubted whether a vegan diet would taste good before actually attempting the lifestyle—and found that there were plenty of options that tasted great to her.

“I think there’s a misconception with vegan food that it’s not going to be good, like ‘What do you eat? Just nuts and a salad every day?’ But no,” Broadnax said. “(People who want to become vegan) can learn to eat new foods, find ways to prepare foods that they never thought of. I learned many foods can be turned into something I would never think of.”

“I feel great (eating a plant-based diet). Like Oreos are vegan, so you could munch on Oreos all day and feel like crap, but if you do your veganism the right way and eat correctly, you feel great. Your body feels great,” Wetzel said. “A lot of people do (go vegan) to be healthier, to lose weight, and it is easy to lose weight. I’m thin myself, just naturally, and when I was vegan, I was kind of scary thin, which is why I’m (now) vegetarian.”

Hake added that just with any diet, or even any decision, research is vital. She said whether it’s visiting a registered dietitian to consult about your diet or going on the web to give you background context, it is important to have knowledge and make your own conclusions; Hake also said the Fair Oaks incident might have possibly provoked others to suddenly go vegan.

“I think people, before they decide to make a drastic decision—like ‘I’m no longer supporting this,’ or ‘I’m no longer eating this’—based on one incident, should do some research,” Hake said. “What are your other companies doing that you frequent? And really dive deep into the ‘why.’ I think those that are already eating a vegetarian lifestyle may already be aware of things like this that happen in the food industry. I think there are also people who have gone vegetarian just because their friend did; they may be surprised which opens the door to research and they may have looked into the food industry.”

Wetzel heavily supported this mindset. For instance, she said despite being vegetarian, she didn’t find Fair Oaks to be completely in the wrong after doing her own research, as she said there was evidence that showed employees were coerced into abusing animals by those making the documentary, and she said the fact Fair Oaks immediately fired employees investigators reported showed they didn’t condone such behavior. 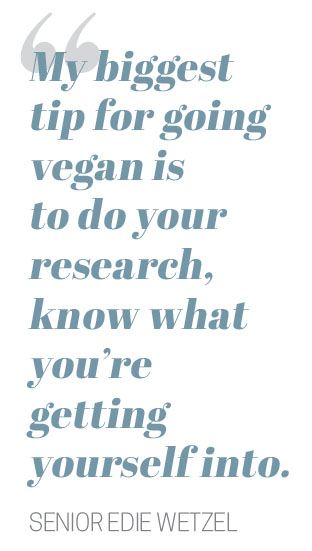 Wetzel said. “Everyone thinks this Fair Oaks situation is so horrible, and yes, the dairy industry sucks, but that’s how all dairy industries are. It was blown out of proportion. My biggest tip (for going vegan) is to do your research, know what you’re getting yourself into. Understand your protein needs, what your body needs; if you’re an athlete, know how many calories you burn a day, just things like that.”

Broadnax said on top of thoroughly understanding the facts surrounding veganism, it’s important to understand that in the end, any type of diet is simply a lifestyle choice that you make for yourself.

Following this principle, Broadnax said it’s important to make sure that, if you do decide to go vegan, the diet is working to your advantage and truly making you feel better about yourself—adding on that while she’s never had meat since her decision to go vegan in January 2018, every once in a while, she still does allow herself the occasional dessert with dairy.

“If you want to go vegan, just do it. Don’t get mad at yourself if you slip up because everybody slips up,” Broadnax said. “I think putting these expectations on myself to be this perfect vegan is really unnecessary. I don’t regret it, and I do get criticisms for not always eating vegan desserts, but it’s not their life and it’s not really affecting them.” 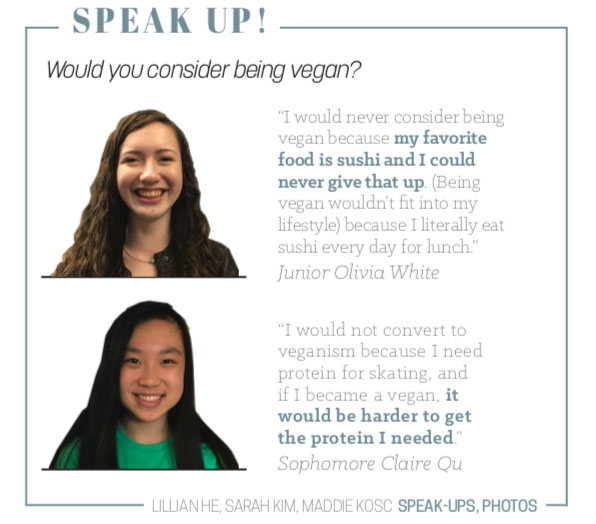 Hake agreed with Broadnax’s comments, saying that veganism and vegetarianism are simply personal lifestyle choices. She added that experimenting with several alternative diets, doing research about them or even consulting with a trained professional such as a registered dietitian could greatly benefit one’s lifestyle choices—whether that be to follow a plant-based diet or not—as long as you find what works for you.

“I don’t necessarily believe in labeling the way we eat,” Hake said. “Just do the research. Experiment. And at the end of the day, it’s not about what we eat from day-to-day, but it’s more of the snapshot of what we’re eating as a whole.”

Read an opinion piece about the benefits of vegetarianism here.