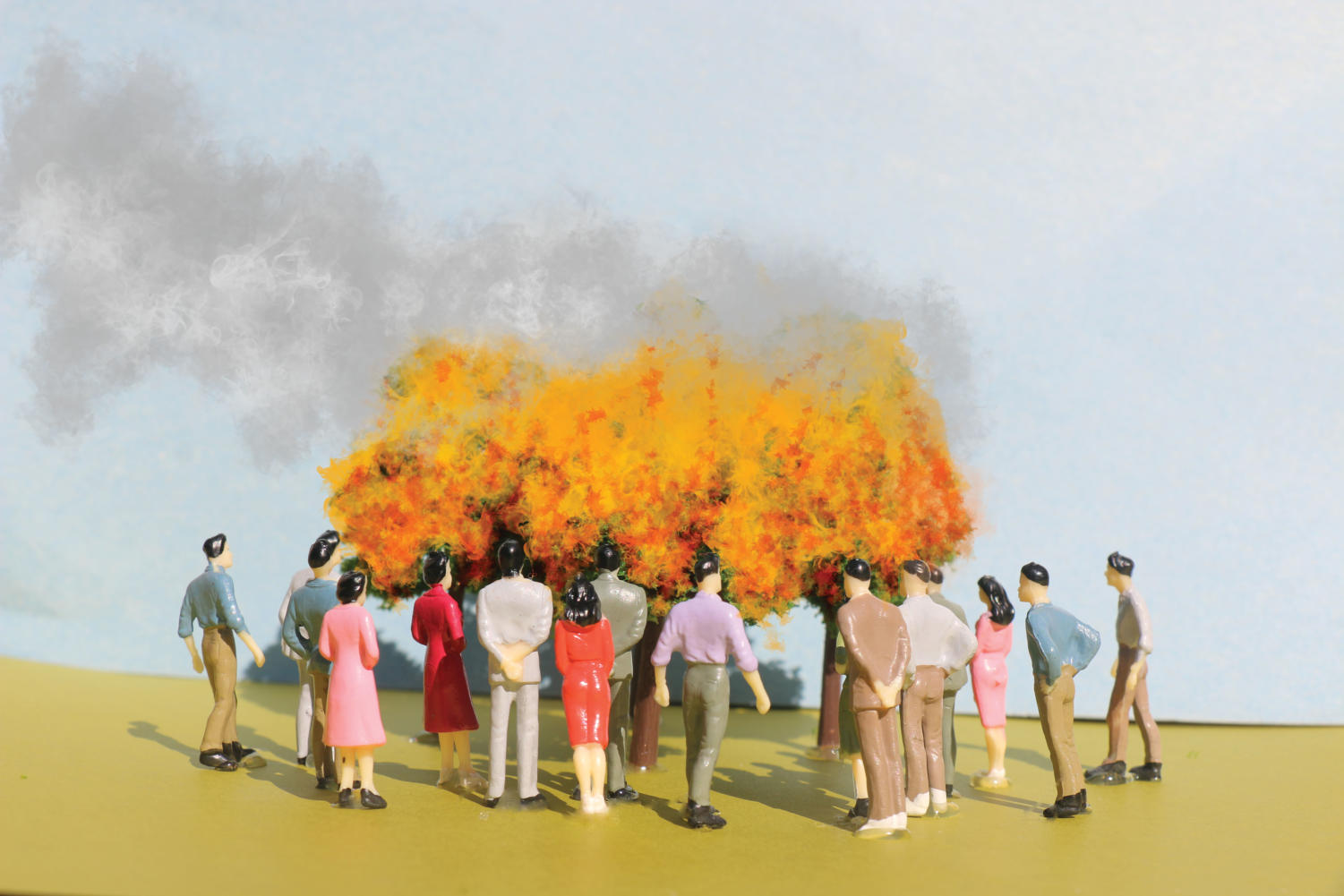 Fired Up: In light of Amazon Rainforest fires, Carmel community circumvents bystander effect to have impact on global issues

In the psychology realm, there’s an intriguing phenomenon dubbed the “bystander effect,” in which the presence of more bystanders around an incident causes fewer people to actually help. Now, imagine this effect on a much greater scale—say, perhaps, the recent Amazon Rainforest fire—where, arguably, any informed person could be considered a bystander, and the so-called incident isn’t a one-time occurrence but an ongoing issue.

In fact, news of the Amazon burnings suddenly spread like wildfire during late August of this year. Although the fires which are often caused by humans have been happening for decades—TIME magazine reported on the Amazon burnings as a cover story back in 1989—very little action was taken until recent weeks. Could this possibly have been a result of the apathy of the bystander effect suddenly reversing? If so, how?

Perhaps it’s because the bystander effect isn’t completely true to begin with. A recent, comprehensive study published by American Psychologist concluded that a greater number of bystanders is actually linked to a greater likelihood that someone will decide to help. However, the study clarified that there wasn’t necessarily a decrease in bystander mindset, where people believe their own help isn’t necessary because of others nearby.

Junior Isabella Fallahi, director of communications for youth-led climate activist group Zero Hour, is someone working to fight that bystander mentality. In fact, she helped organize a youth climate summit, #strikewithus, taking place today nationwide that activist Greta Thunberg is attending. Click here to read a Q&A with Fallahi about her involvement with this youth climate summit.

“Regardless of whether three people speak up on an issue that’s important, such as climate change, when it does come to it, the message of a million people is going to be more effective and heard than the message of three. That’s the easiest way to put it,” Fallahi said. “You need to care.” 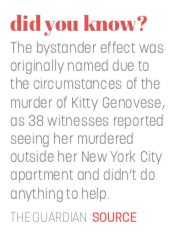 While bystander mentality is certainly prevalent in an activist context, according to Melinda Messineo, professor of sociology at Ball State University, it can also be seen in different contexts such as voting. She added that it isn’t always a physical issue either; bystander mentalities can actually be seen on social media as well in a more non-traditional sense.

“If you’re just liking (a post) in social media, you probably have a really superficial understanding of it, so that is definitely a risk about being a bystander,” Messineo said. “Let’s say I know that there’s a protest happening in Indianapolis this weekend. I was really excited because three of my friends were there, and I put likes on their Facebook page… I am feeling a false sense of engagement although I’m not physically there. Maybe I’m supporting my friends to be there, but my body is not there. It’s not being counted.” Click here to read more about the impact that social media has on activism.

Yet sophomore Varsha Chandramouli is someone who has taken matters into her own hands rather than standing back. This past summer, she began selling handmade bracelets to raise money for the Marine Conservation Institute, advertising her project through social media. In her eyes, the bystander mindset isn’t entirely illogical, as she said it isn’t possible for one person to help out on everything.

“In terms of issues and social issues, I think you can definitely focus on another problem and help because in the end, it’s all just help,” Chandramouli said. “But if it’s to a point where it’s not going to be productive—like if someone drops a book and there are 50 people around them, it’s not productive anymore. I think people should always do something, but they should focus on what they’re passionate about, not what other people are doing.”

Chandramouli said she was able to find that passion with marine conservation, and in doing so, she was able to use social media to her full advantage in advertising her charity bracelets; however, networking sites aren’t always helpful in furthering activism. Joshua Brinkman, vice president of the Young Republicans Club and junior, pointed out that posts on social media don’t always equal action, even if they’re intended to. Click here to read a story about youth activism in today’s world.

“Social media’s a really good tool to get out information about taking action and about certain events that you could get involved in, but it is a sad reality that a lot of people don’t partake in these events,” Brinkman said. “I believe people should get involved and help people.”

This sort of passive social media activism is a relatively new phenomenon dubbed “slacktivism,” or “clicktivism,” as more and more people turn to social media as a platform for activism. Whether this development is positive or negative, however, is a much-debated topic.

According to The UX Review and a study published by CyberPsychology, slacktivism often arises out of a desire to present a perfect online presence, which can translate to people supporting what they believe to be “correct” behavior, but on a surface level.

Because of the work she’s done on networking sites, Fallahi said she’s familiar with desires to present a perfect self. In particular, she said activism has become more “glamorous” recently, resulting in clicktivism that often arise out of ulterior motives.

“We see this more and more recently; people are just doing (activism) now for college apps,” Fallahi said. “It’s a thing for students to get into colleges and look prestigious. Something I’ve been educating myself more on recently is the fact that so many ‘organizers,’ per se, are going off and forming these organizations that are doing the same work that other grassroots organizations have done—all for the sake of putting it on their college apps. What it does at the end of the day is, it doesn’t advance a movement, it doesn’t progress an issue. All it does is make resources more scarce.”

Yet some people participate in slacktivism simply to boost their own self-regard, especially as social media has become increasingly associated with mental health. For instance, Messineo said one can feel accomplished from a simple tap, decreasing motivation to take physical action.

“This idea of clicktivism or slacktivism—it’s very powerful in terms of generating awareness, but the translation to action isn’t always there,” Messineo said. “(When) commitment is low to the issue, whatever kind of motivation they had to be active is satisfied by feeling like, ‘Oh, well I have voiced my support for this issue. Good for me, I’m done. I made an impact. Let me move on to the next thing.’”

However, social media doesn’t always have negative implications, as the aforementioned CyberPsychology study pointed out the benefits to so-called slacktivism as well. It concluded that if social media users have intrinsic motivation when supporting an issue online, they are much more likely to later take meaningful action.

In a similar vein of thought, Messineo added that with today’s prevalence of sites like Instagram or Facebook, online mediums can be very successful in mobilizing groups of people with kindred intentions. Rather than wanting to display a perfect persona, people might participate in online activism simply to contact others with like-minded attitudes who respectfully share their stances on social or political issues.

“We usually are connected with people on social media who share our same values,” Messineo said. “If you and I are concerned about the environment and you care about it—the fact that you are someone I know and I trust your judgment and you care about an issue—that’s going to make me more interested in it than if some stranger made it come across my feed.”

In fact, Chandramouli said she was quite aware of the virtual familiarity social media can create between users, and utilizing that understanding, she actually created tangible results. By using Instagram as her advertising platform, Chandramouli was able to sell her charity bracelets.

“I put (the bracelets) on my story at first, because I just thought it would be a good way to get attention,” Chandramouli said. “Social media works better than word-of-mouth to spread things… and then my friends reposting it—I thought that was good, because of people, friends of my friends, (would) trust my friends.”

She wasn’t wrong. After one day, over 60 orders came in. Soon after, it became successful enough that she shifted from simply selling $1 bead bracelets to more expensive friendship ones made of thread.

However, for those who aren’t able to create that kind of tangible outreach from online networking, Fallahi heavily emphasized the importance of taking tangible action whenever possible, rather than simply passively supporting on social media.

“I can call attention to climate change all I want by posting on social media,” Fallahi said, “but what’s really going to work is if I call my representatives. If I send them letters. If I schedule meetings with them. If I sit down with them, and I tell them the way that climate change is affecting me, my friends, my family, and our future is youth.” Click here to read about a past march Fallahi was involved in.

In fact, as an individual, being aware about what issues to prioritize might be enough to make a difference. Brinkman said ideally, people would easily translate awareness into action.

“It takes a very unique person to actually go out and solve the world’s problems,” Brinkman said. “For the people that do take action, that’s phenomenal. We need more of that in society. For those that decide to just view the issues and not do anything about it, sure, you can go that way, but when you have a problem in your life and need others to help you, just think about whether people would be willing to help you.” 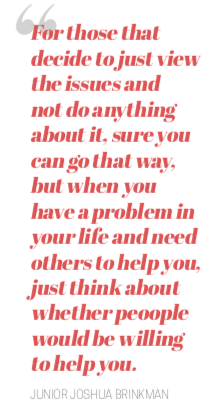 Despite all the bystander mentalities that might exist on the worldwide web, as people often ignore issues they see, taking action is possible as well, and it doesn’t necessarily exclude the prospect of social media. Although such activism is often linked with slacktivism, perhaps social media could actually be used to an activist’s advantage in decreasing bystander apathy.

“Social media is definitely a part of a way of how we get our word out,” Messineo said. “But it’s a means to communicate our message, it is not the activism itself. It is the conduit, it is the bridge, but it is not the social action. I think that’s the distinction they’re trying to make between clicking something online as your social activism versus using social media as a way to get engaged with other people who are active in social issues.”

Ultimately, all agreed that it is better to take action in some way—whether that be virtutally or in real life—than to do nothing and be a bystander.

And as Brinkman simply put it: “I think, taking action, especially in today’s youth, is very important. There are many problems in the world, like I stated before, and prioritizing which ones you want to try and solve or try to at least help solve, it would be better for the future, because then we would have less to worry about in terms of problems that need to be solved, and we would have a better world once we grow up.” 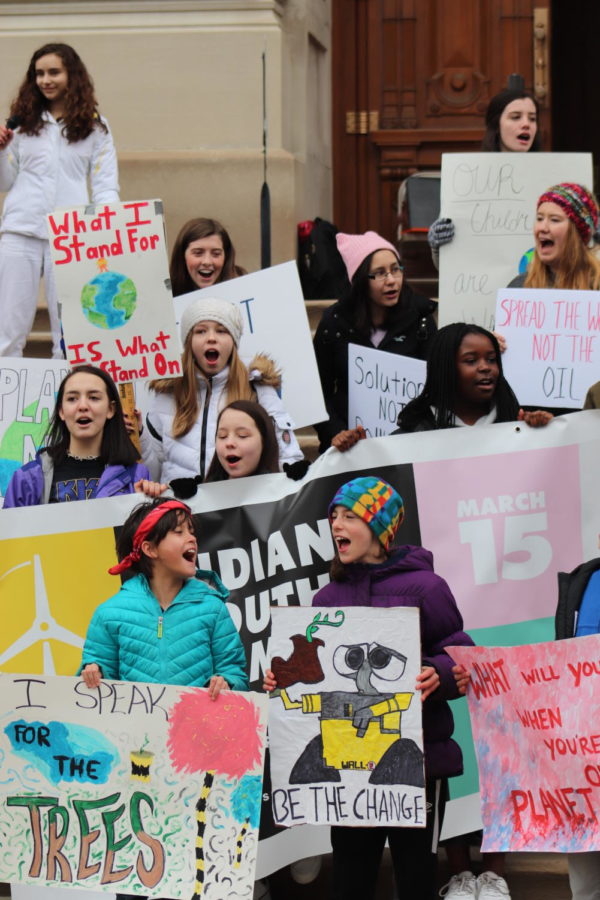 Gallery|3 Photos
Maddie Kosc
RAISING THE BOARD: Youth activists protest in a march against climate change on March 15. Fallahi organized a similar march that will be happening across the country today.
2