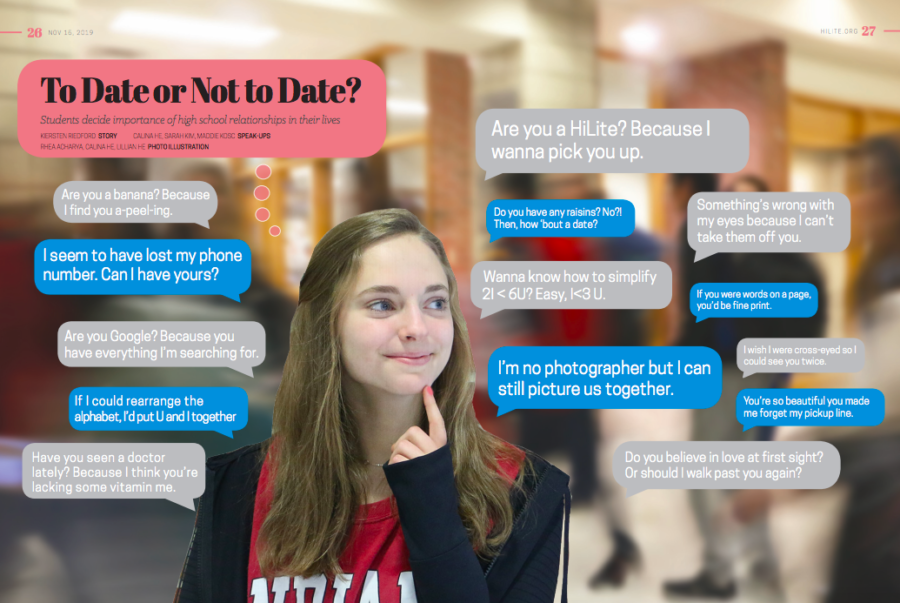 Sophomore Elizabeth Katz has never dated in her life and she said during this cuffing season she would prefer to keep it that way. The term “cuffing season,” which originated in Urban Dictionary in 2011, refers to the desire to be in a relationship or “cuffed,” during the winter months.

Katz said, “I think it’s better if you’re not in a relationship because you can be more open to everything, you can be more available to try new things, and I feel like you can take one step at a time through life so you don’t have to rush into it or anything.”

What Katz may not realize is that her decision not to date may make her more content in the long run. According to new research from the University of Georgia, teens who don’t date are less depressed and have better social and leadership skills than those who do. There’s also evidence that the number of teenagers who don’t date is growing.

According to the U.S. Department of Health and Human Services (HHS), ever since 1991, the percentage of teens ages 13 to 17 who did not date increased from 14% to 38% in 2013. The percentage has gradually increased over the past six years to nearly 66%.

Katz said she has a theory as to why. She said, “I do think teens dated more (in the past) compared to now because more teens probably thought that you were supposed to get married at a young age so they would date more people to figure out who they liked so they could marry and have kids at a younger age.”

Amy Liptak, licensed mental health counselor, said there are other reasons too. She said via email, “The teenage years are also incredibly important years for self-development, learning self-esteem, independence from parents and developing academic skills. (The students’ interests) need to be considered without the distraction of a dating relationship and without the pressure of trying to meet a partner’s needs.”

The University of Georgia’s study investigated the question of whether teenagers who decide not to date are considered to be maladjusted or are social misfits. The data consisted of having students in Northeast Georgia from sixth to 12th grade report every spring if they had dated or not. They also reported aspects of their social and emotional lives as well, including positive family and friend relationships, symptoms of depression and suicidal thoughts. Teachers, on the other hand, were to report the students’ behaviors regarding social skills, leadership skills and levels of depression.

The results of the University of Georgia’s study found that the students who avoided dating had lower symptoms of depression.

Katz said she could see why, “(When you don’t date,) you don’t have as many highs and lows,” she said. “You can stay mainly at those high points because you don’t have those breakups and you don’t have to go through the drama within the relationship… When you are in a relationship you’re happy but as soon as it ends, usually depression starts.”

Another outcome of the university’s study was that students not in relationships have better leadership skills than those who are.

Liptak said, “I think teens who avoid relationships and focus on their academic success are at a great likelihood of developing good leadership skills and setting themselves up for a positive college experience. Teens who work on developing themselves and their own interests tend to develop healthier social skills and self-esteem than those who do not.”

Senior Maggie Reynolds, who has been in a relationship for over a year, said she understood that viewpoint.

“(Teenagers who avoid dating) might (be better leaders) because when someone is by themselves they might be more independent. Rather if you’re with someone or your partner, you’d want to do it together,” she said.

The University of Georgia’s study also said that one’s teenage years are the most primal for building self-identity, learning about other people and growing emotionally. According to the study, there is a possibility that dating in high school can impact one’s growth in these areas.

Sophomore Nolan Jones, who was with a partner for eight months, said he could see that impact.

He said, “I feel like to a certain extent, when you’re in a relationship it kind of becomes your social life, not entirely, but if there’s a very important person in your life then it can happen.”

“When you talk and experience things with someone it can bring out new aspects of your life or personality that you didn’t know you had,” she said. “When you’re spending that much time with that one person or however long you spend with that person it will definitely change your life and personality and how you look at things because their views and your views might clash, but a new person will always bring new views into your life, whether it be good or bad.”

Despite the University of Georgia study’s findings, according to the HHS, not all relationships are bad. While the ones that put students in abusive or controlling stituations can put a student at greater risk of not developing good self-esteem as well as being kept from developing their own individual interests, the HHS mentions it can be beneficial for a student’s development if they are in a healthy relationship that allows them to be ready for life beyond high school.

Reynolds said she agreed with that finding.

“(A relationship can have a positive influence on a teenager’s life and) it helps shape them into who they become, especially when they’re starting to become more independent,” she said.

However, Liptak said she disagreed, “I know lots of healthy awesome young people who did not date in high school and instead spent that time doing activities they loved, working hard in their classes and having healthy friendships,” she said. “Dating in high school doesn’t necessarily make life better in any way past high school.”

The study from the University of Georgia mentions that students who choose not to date are not abnormal in their development. They are simply following a different path than those who are dating, and, according to the study, they benefit from it. Those benefits include better social skills and low depression.

Katz said she’s experienced those benefits firsthand. “I feel that I’m learning my self worth and focusing on the little things in life (while) being single,” she said.

In the end, Liptak said teens should focus on developing themselves, their identity, their likes and dislikes and work hard to do as well as they can academically so they can prepare for a positive future.

She said, “Teens who focus too much on dating are missing out on developing themselves and their own independence.”

Click here to read a column about how “The Bachelor” show affects student’s perceptions of dating by past Managing Editor Misha Rekhter (Class of 2019).

Click here to read a column about public displays of affection in high schools by past Managing Editor Heidi Peng.