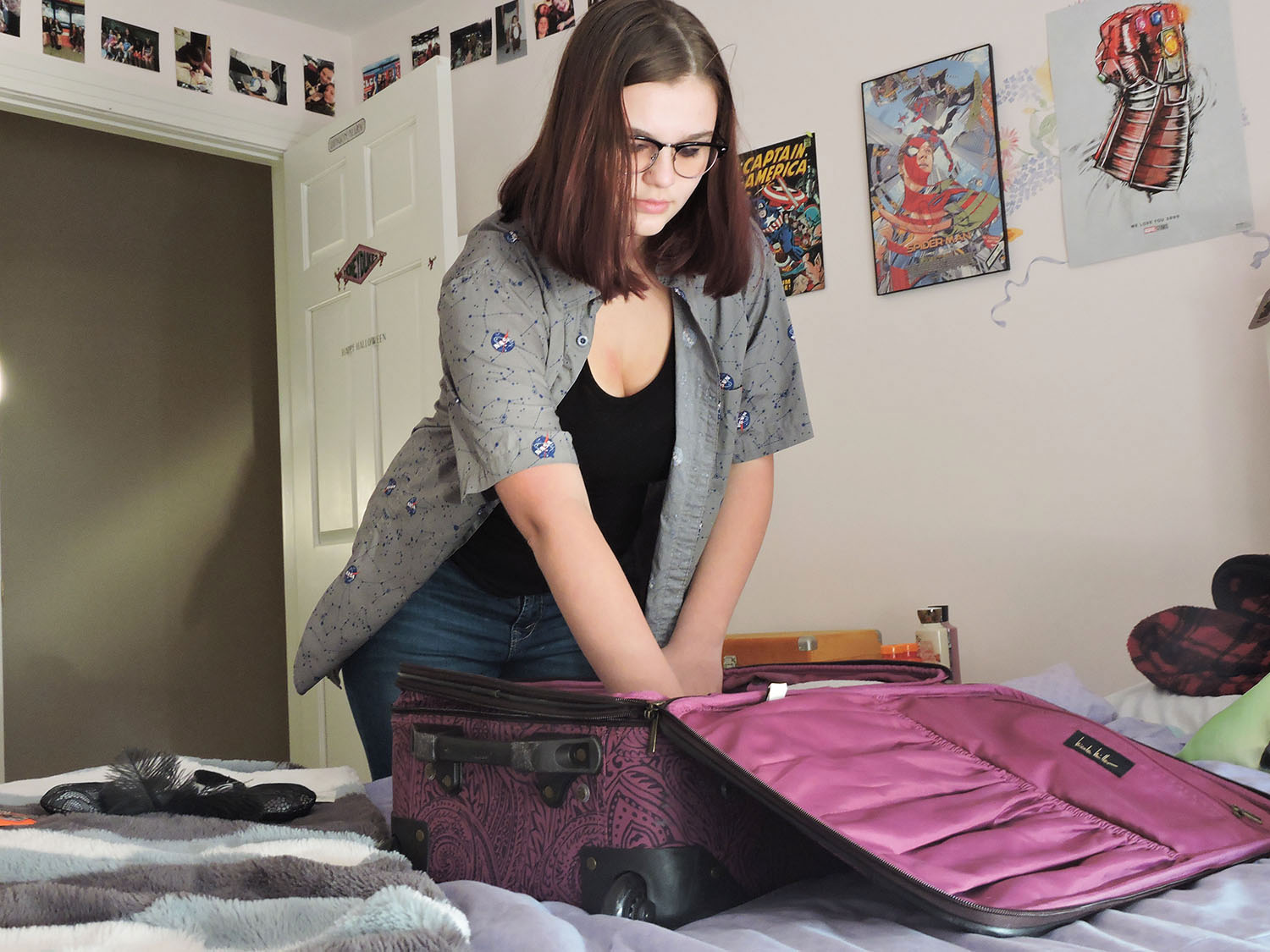 When junior Olivia Sarjent was a freshman, she, as a member of the color guard, traveled with the marching band to southern California for a competition. The trip only happens every four years, and the students who make the trip visit Disneyland, Universal Studios Hollywood and other sights in the area.

Along with many other CHS students, Sarjent traveled out of state without her parents, and although she was still with the school the whole time, she said she felt that the experience was still a new one.

“I know on our last day (the chaperones) were like, ‘Okay, here’s your $10 that has to last you lunch and dinner,’ and so you were kind of on your own to choose what you were going to do,” Sarjent said. “It’s kind of strange because for a lot of kids it was probably the first time being given money, like, ‘Here you go. Get food.’”

Two weeks before her 11th birthday, sophomore Naomi Grossman flew to Laramie, Wyo. to visit her aunt and uncle. She said she remembers the experience well.

“You have more freedom to do what you want when you’re not traveling with your parents,” Naomi said. “You don’t really have to talk out what you want to do, so my aunt and my uncle were kind of substituting as my parents. You get more special treatment.”

However, traveling by plane can be inaccessible to some. Plane tickets often cost hundreds of dollars, and when traveling in groups, this bill can add up quickly. Furthermore, coordinating travel for multiple people can take time.

“It was definitely easier (to plan) because it was just me opposed to my brother and my dad and my mom and (me),” Naomi said. “So that’s why instead of us taking a year to plan it, it took two or three weeks.”

Junior Emily Osborne is an oboist, and her teacher is a professor at Butler. At the beginning of this year, Osborne was asked to travel with her to Italy for a music festival. Osborne’s family traveled with her overseas, but their paths diverged as they went to Switzerland while she went to Italy. 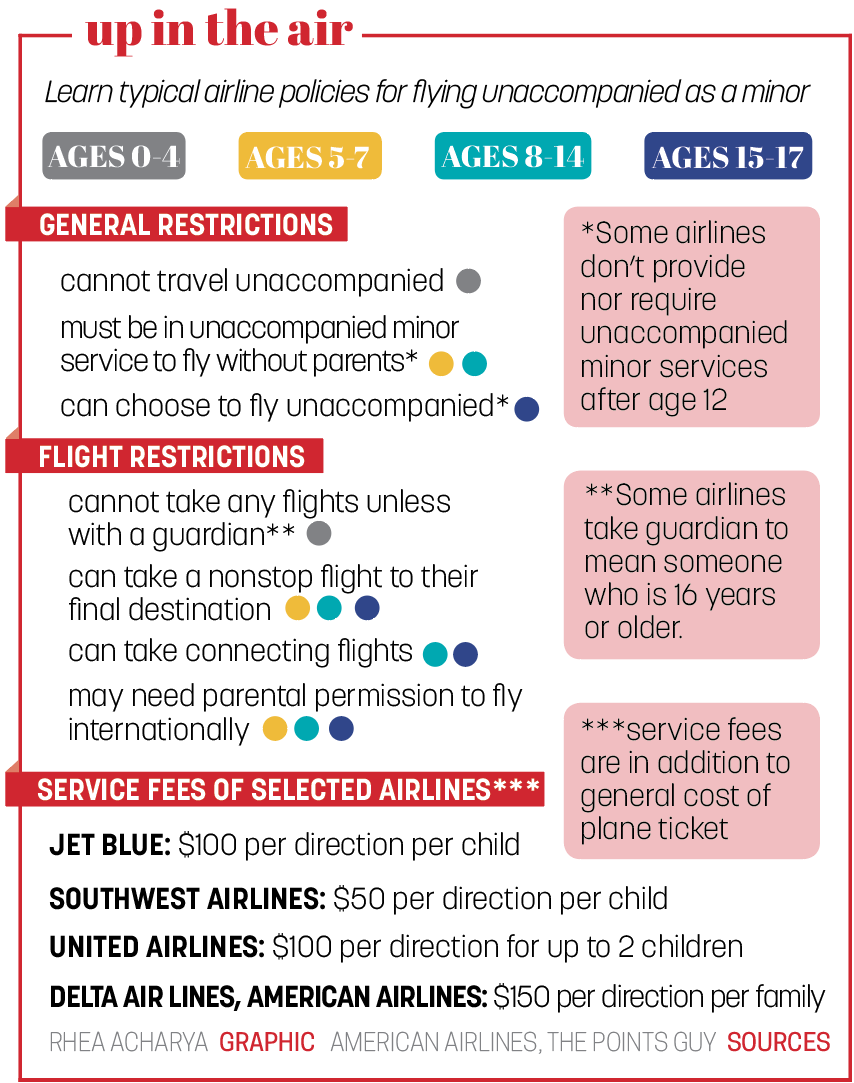 “It helped that my family was going over with me in flight, so I didn’t have to navigate airports myself, but still it took a lot of planning, so I figure out when was going to be separated from them,” Osborne said. “When they were coming back because they did go to home last night to hear me play in the concert, it wasn’t so much planning because it wasn’t like me going with my friends on a trip or vacation it was well-scheduled and well-organized.”

It may also seem as though traveling long-distance without one’s family would be scary for both the children and the parents involved.

Naomi’s father Daniel Grossman said via email that this was not the case for him.

“Letting Naomi go to Wyoming alone was not scary for me because the airlines have systems in place for child travel, and she was going to visit my sister,” he said.

Naomi, on the other hand, said she had some anxiety, but that didn’t get in the way of making good memories.

“I did get nervous,” she said. “At first I was like, ‘Okay, I’m not going to think about my family because I know I’ll get kind of sad.’ And then after a week, I hadn’t talked to my parents, and it’s not because I didn’t love them. It’s just, I knew (that) if I was to call them on the phone I would cry. And then my aunt was like, ‘Yeah, your parents are on the phone,’ and I did cry. But I still enjoyed the trip.”

Ultimately, Naomi, Sarjent and Osborne all said that their trips were worthwhile experiences.

“I was at first very scared to go because I was going to be one of the youngest people there,” Osborne said. “I went with my oboe teacher and her husband and then her two kids. I was really scared I wouldn’t be able to hold up with it, but I’ve gotten to be more responsible by myself. I’m not at the point now where if my parents are out of town I need someone to stay with me because I’m more self-reliant.”

Naomi said that it can be fun to get away from the normal routines and rules of being at home.

“The fun thing about traveling without parents is that you have a break from your rules and customs in your household,” Naomi said. “It’s always a unique experience.”

Read about the social media expectations that traveling entails here. 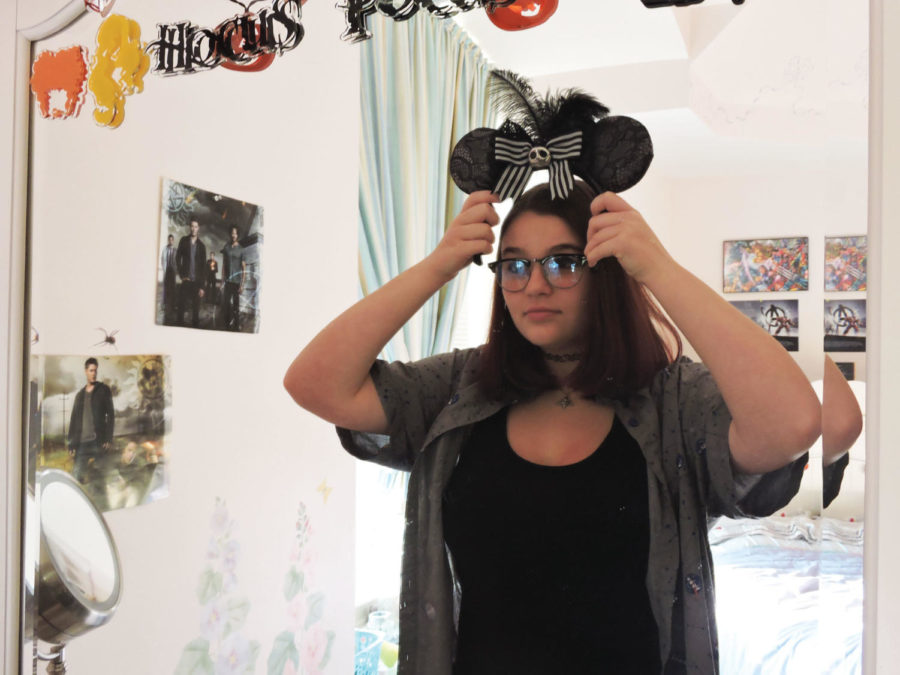 Gallery|2 Photos
Leah Tan
Junior Olivia Sarjent tries on a pair of Minnie Mouse ears from her trip to Disneyland. Sarjent said traveling with the marching band without her parents provided a valuable experience that encouraged her to be more responsible.
2