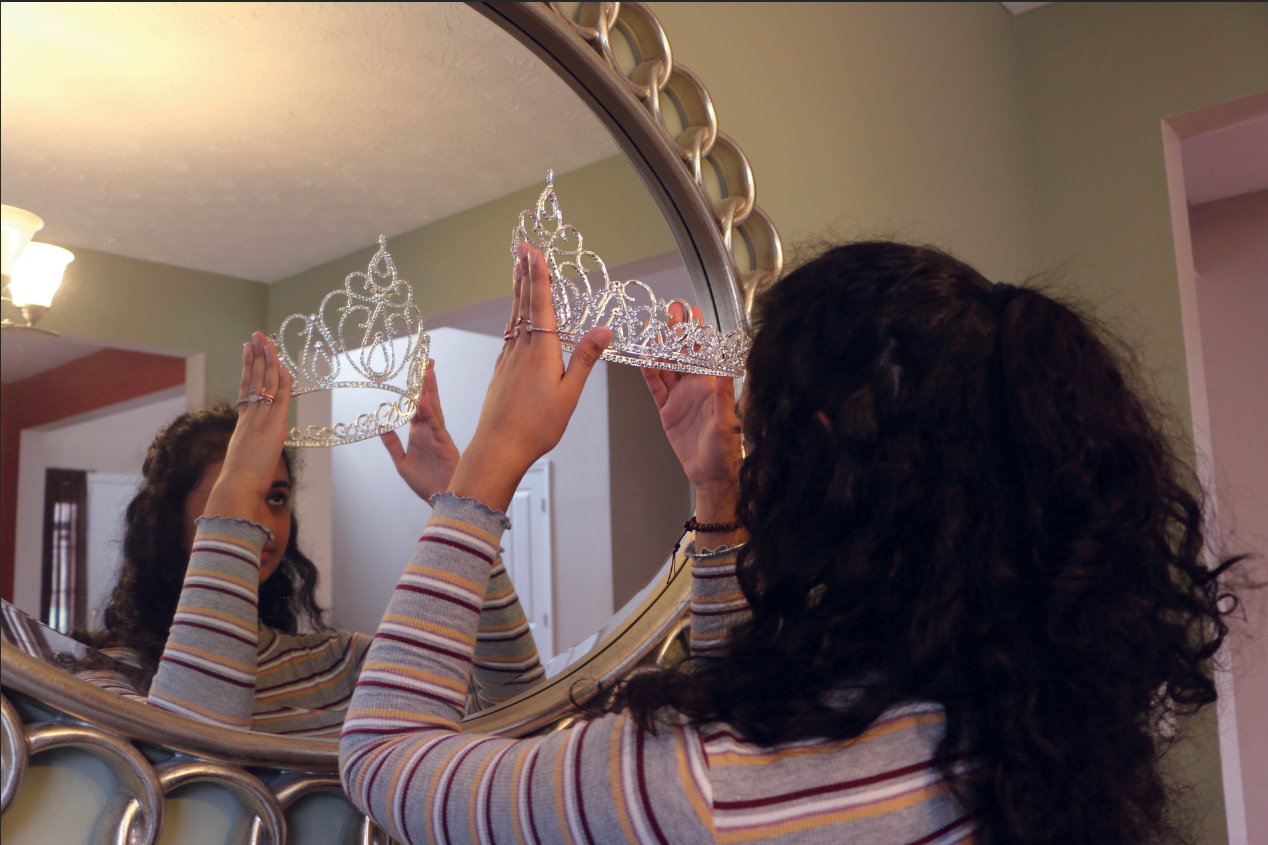 When a family friend told Abi Meyyappan, National American Miss Indiana (NAMI) finalist and senior, about an opportunity for a free photoshoot this past summer, Meyyappan said she had no idea it was actually an open call for a beauty pageant. After the photoshoot, she thought nothing of it, but a few weeks later, she received an email informing her that she had been selected to participate in the NAMI competition. Thinking back to her New Year’s resolution to pursue each opportunity with which she was presented, Meyyappan said she decided to take a leap and begin her journey with pageantry. Little did Meyyappan know, however, that these would be her first steps toward a once-in-a-lifetime opportunity that would leave her with lifelong lessons and friends.

Earlier this year, Meyyappan participated in NAMI for the first time and ended up placing in the top five, which qualified her to advance to the national-level competition. While Meyyappan said she had never expected to partake in a pageant prior to this year, she also said participating in NAMI has helped her in many ways.

Despite Meyyappan’s positive experience with pageants, there are still those who question the benefits of participating in them.

Critics often argue these contests fuel unhealthy competition by pitting contestants against one another. During Miss Amazon 2015, for example, runner-up Sheislane Hayalla notoriously tore the crown from Carolina Toledo’s head moments after her coronation, a moment that has garnered over seven million views on YouTube. However, Meyyappan said that was not the case for her, as her fellow competitors at NAMI were nothing short of supportive and did not have an “eyes on the prize” mentality.

“Going into this pageant, I didn’t know anyone,” Meyyappan said. “All the girls there had been doing National American Miss for years, so they all knew each other. I was kind of nervous because I’d never met any of these girls before, but they were all so sweet.

“One of my favorite memories was when we were all just complaining about how much our feet hurt, so we were sitting down and telling stories. I know it doesn’t seem like much, but it was really just the feeling that it was such a positive environment, and everyone was so encouraging. It was just compliments all around, and there was nothing negative at all that whole weekend. Though it was a pageant and everyone wanted the crown, it didn’t feel like a competition because there was no animosity in the air.”

Thanks to her newfound group of friends from NAMI, Meyyappan said she got more involved in the community through charity work. Although NAMI already required all contestants to bring in donations for children, Meyyappan said she and her friends continued to give back even after the pageant was over.

“We all got together and volunteered at the Ronald McDonald House downtown, where we got to cook and serve a meal for families who had to stay overnight at the hospital,” Meyyappan said. “This was something I had never done before, so I think being a part of this pageant definitely opened me up to doing even more types of community service, and I learned about new opportunities to serve other people.”

“Just like participating in any kind of sport, pageantry has fellowship opportunities, industry networking, advancing to state and national competitions and, most importantly, it’s the person’s journey of personal development that leads to reaching their greatest potential,” Brown said. “So many lifelong skills are developed through pageantry both on and off the stage, such as public speaking, community service, networking and title management.”

Alexandria Audritsh, 2019 International Festival Queen and senior, is no stranger to these improved real-world skills; she has been participating in pageants for years. Even though Audritsh has had plenty of experience being on stage because she has been dancing since she was 5-years-old and singing since she was 8, she said pageantry still boosted her confidence.

“When you’re a young child, you’re really carefree with being on stage, but when you get older, you start overthinking and having second thoughts about yourself,” Audritsh said. “Pageants really helped me get through that and helped me believe that I really am a confident, beautiful person and that it does not matter what other people think.

Meyyappan also said her confidence improved as a result of participating in pageants; however, she said she believes there is still a stigma surrounding pageantry, giving the impression that pageants focus solely on outward appearances.

“People think pageants are all about looks, but they’re really not,” Meyyappan said. “The biggest thing I learned (from pageantry) was how important confidence is and how a smile is really the prettiest thing you can wear. Pageantry is about how you present yourself and how you make others feel. It’s how you use what you know to help other people. People aren’t always going to remember what you said to them, but they’ll remember how you made them feel.”

Audritsh also said she has dealt with people who have similar misconceptions about pageantry.

“When I talk about pageants, most people think of something like ‘Toddlers & Tiaras,’” she said. “But pageants are really about internal beauty.

Throughout the years, beauty pageants have continued to undergo several developments to have less emphasis on physical appearance. Last year marked an especially significant change for the Miss America pageant, as the Miss America Organization eliminated the swimsuit collection and announced that the contest would no longer judge participants on their outward appearances. Meyyappan said she believes this change to the program is a step in the right direction.

“When people hear ‘beauty pageant,’ they think you have to look like a model or look a certain way,” she said. “They think it’s for girls with long legs, a tiny waist, all that stuff, and I think taking away the swimsuit section showed how that’s not the case. When you’re wearing a swimsuit and you’re in front of everyone, it’s like you’re on display for how you look because that’s what they are looking at: your figure. I think taking that away builds confidence because there were girls of all sizes, of all ages (at NAMI).”

“In the beginning, (pageants) were mostly based on conventional beauty, but now the world has become a more accepting place,” Audritsh said. “Now, I think most pageants have realized that how you look in a bathing suit doesn’t necessarily constitute your true beauty. Most pageants now look at inner beauty, and the most attractive thing to them is being a kind, confident and intelligent person.”

With less emphasis on appearances, there has also been an increase in diversity of pageant titleholders in recent years. This year, for the first time in history, African-Americans held all three major pageant titles in the United States: 2019 Miss America Nia Franklin, Miss USA Cheslie Kryst and Miss Teen USA Kaliegh Garris. Considering Miss America banned African-Americans from competing until the 1940s, this moment showed the development within the beauty pageant industry in recent decades. Next week, about one-fifth of the contestants on the Miss America stage will be people of color. According to Audritsh, the increased representation of people of color in pageantry has given her more opportunities to appreciate her culture.

“(As a Chinese-American), there’s sometimes some bias, but (pageants are) usually pretty open-minded,” Audritsh said. “Almost all the pageants I’ve participated in have been really accepting of diversity and other cultures, so I would definitely say pageants have evolved in that aspect. For the International Festival, it was more culture-based…it was kind of like a miniature Miss Universe in Indiana. Basically, the whole pageant worked to promote cultural diversity in Indiana.”

Brown agreed, saying these broken barriers within the pageant industry are positive changes and encourage contestants to embrace who they are.

While Brown said it may be overwhelming to do something new, she, Meyyappan and Audritsh all encouraged others to step outside their comfort zones and participate in pageants  the unique experiences and valuable skills gained from pageantry as reasons to compete.

“I think (pageants) give you a platform to help people,” Meyyappan said. “You realize that you have the power to make a change in other people’s lives, however big or however small. It gives you confidence to do that. You go out there, you put a smile on your face and you be proud of who you are because confidence makes anything look good. You don’t have to be skinny; you don’t have to look a certain way. You just have to be happy with who you are.”

Click here to read a Q&A with junior Catelyn “Catie” Combellick, who was crowned the 2019 Miss Indiana Teen USA.