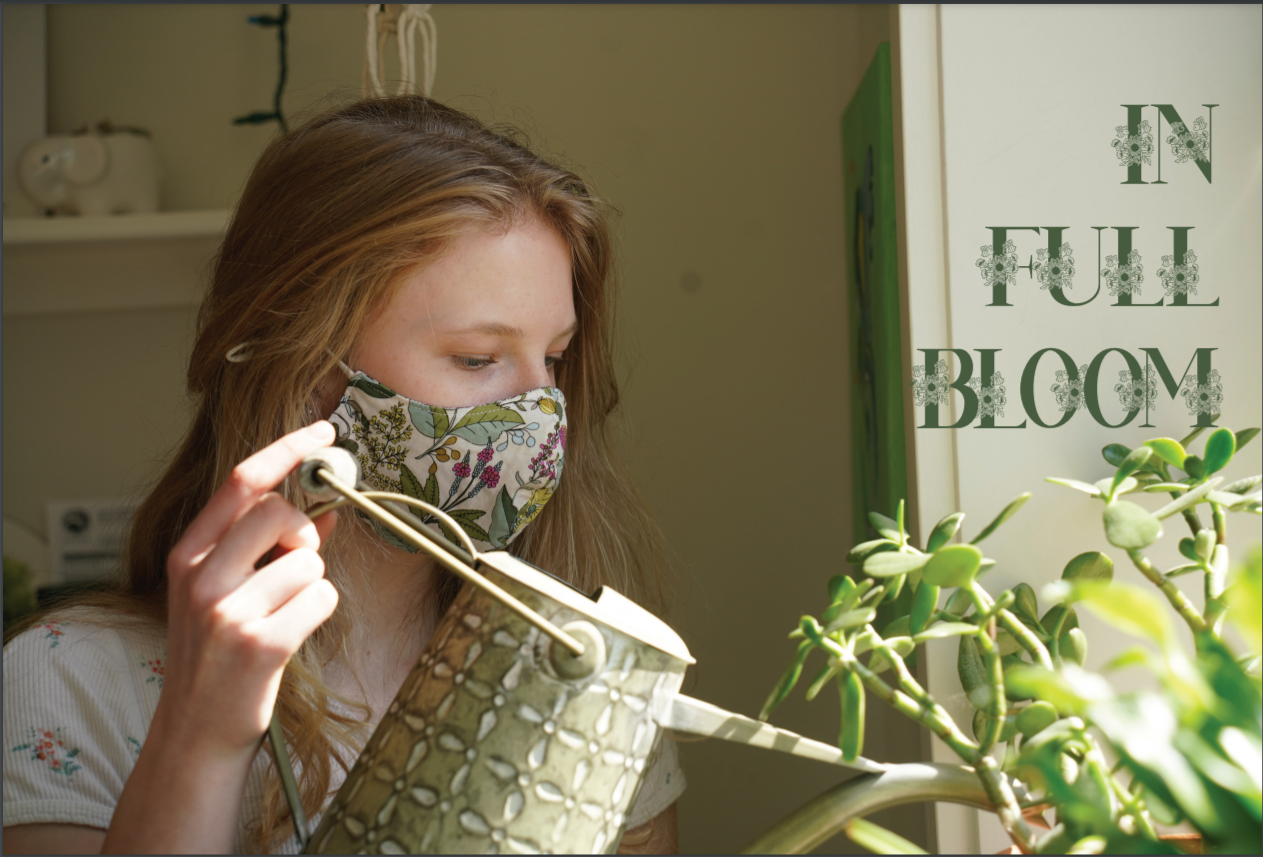 Sophomore Josie Paxton waters the plants in her windows. She said having plants is beneficial to her mental health. (Clare Dierckman)

Sophomore Josie Paxton waters the plants in her windows. She said having plants is beneficial to her mental health.

According to sophomore Josie Paxton, the changing seasons means she can once again go on long hikes and sit outside.

Paxton said, “I spend a lot of time outside when the weather is nice… I go on a lot of hikes and just like to take it all in: the sun, the scenery, the grass and just kind of the life going on around you. Being around that and nature just makes me feel good and I just like being outside.”

Paxton is not the only one who feels better after spending time outside. With the first day of spring on March 20, many begin to look forward to the warmer weather and spending time outdoors. According to a 2019 study by the Scientific Journals, doing so can be beneficial; the study found that individuals who spent 120 minutes outside per week reported a significant increase in their sense of well-being as well as overall health.

According to Outdoor Exploration teacher Derek Moser, these benefits are why he spends as much time outside as possible.

“I really just try to get outside for a while every day. Getting fresh air and sunshine is just so important. There’s so much data that proves that it is so good for you,” Moser said. “Especially now with COVID-19, even more so because data is showing that it’s not spreading (as much) outside. I’m in higher spirits, a better mood and better health after doing so… Going outside, it is one of those things where there’s really no downsides to it.”

“(Going outside) feels so very good and can help to relieve stress, sadness and frustration when life gets difficult,” Rushing said via email. “Playing outside just melts all my cares away and makes me feel like a little kid again. Even if I only take a walk around my property and breathe in the fresh air, it helps. Best medicine ever.”

She said one of the main activities she does outside is gardening.

“​I keep a garden because I enjoy being outside, and taking care of the growing things gives me a good reason to go outside every day,” Rushing said. “I’m not the type that goes places to hike or look at nature very often, but I do love to be outside enjoying it at home.”

Paxton said she also spends a lot of time gardening and raising plants.

She said, “I started really getting into gardening one to two years ago. I really like seeing the plants grow along with you and what you’re capable of creating and taking care of. It is really interesting because once you kind of get to know the plants, you start seeing their personalities and it is fun to see them grow in their different ways.”

Senior Daniel Tocci said he plans to start a garden as the weather grows warmer. He collected seeds from his garden last year for plants such as tomatoes, dragon roll peppers and cantaloupes and said that he plans to grow them to help his mental health.

“Growing a garden definitely does help with mental health. It’s nurturing something and putting so much effort into growing these plants; the reward is so much more than let’s just say you buy some food at the grocery store and you just eat it,” he said. “There’s no sense of pride in just eating something from the grocery store, but once you grow it yourself, that gives you a sense of pride. That gives you a sense of confidence. If you put the effort into actually growing these crops, it definitely helps your mood when you actually reap your rewards.”

For Tocci, this passion for nature and the outdoors has led him to pursue forestry as a career.

“I chose to go into (forestry) because of the passion I’ve always had for nature. All of my hobbies involve (it),” he said. “It’s kind of cliché to say, but nature relaxes the mind… I wanted to work outside, so forestry will be great.”

Moser said his appreciation for the outdoors also prompted him to take action. For him, this meant creating the Outdoor Exploration class, an elective Physical Education course offered at this school for all grades.

“It took three years to get it approved but once it was, I just knew it was a class kids want to do, and something that’s really important,” Moser said. “From 8:45 a.m. to 3:45 p.m., you’re inside and sitting down. However, with Outdoor Exploration, you’re up and moving around outside and just learning in a different way. This class teaches important life lessons they can’t learn in a traditional class, and I just wanted a way to incorporate nature into kids’ lives since so much is spent inside.”

According to a 2001 study conducted by the Environmental Protection Agency, the average individual will spend 87% of their time inside and an additional 6% in automobiles, totaling 93% of their lifetime. When averaged out, the time spent outside equals half a day per week. Further, with the increase in technology and its accessibility, it is likely that the amount of time people spend inside has increased since then.

Tocci said he counteracts this trend by spending the majority of his summer outside.

“I spend five or six hours a day outside during the summer. A lot of that is taken up by either hiking, fly fishing and occasionally kayaking and just really trying to get outside,” he said.

Rushing, who owns three acres of land, said she also spends much of her free time outside, taking care of her property.

She said, “Being outdoors just feels good to me. It improves my emotional and mental state every time. Even if I was in a good mood before I went out, it gets even better when I am out there breathing in the fresh air and feeling the sun on my skin and the dirt beneath me.” Click here to read a story on Key Club’s upcoming tree-planting event on April 17.

Paxton said she also finds benefits from her garden. She said while it may not directly correlate with her mental health, there are still lessons she learns from her plants.

“I have definitely learned a lot about acceptance because a couple plants that I have taken care of have died, and it is always hard when this happens because you have to accept that your plants aren’t perfect and you have to understand that it is not because of something you did wrong,” Paxton said. “I think that I’ve just learned lessons like this along the way from gardening, and I think that these have just made me grow and be a better person.”

Until the weather becomes concretely warmer, however, Tocci said he continues to find new ways to spend time outside.

“Spending time outside in the winter, you can still do stuff but you are definitely limited,” Tocci said. “I can understand why people don’t really want to go outside because even when it’s not sunny out (but) not freezing like it (was on Feb. 28)—even when it’s like that, it’s still really gloomy outside. There’s no green plants. Everything’s gray but you can still do stuff outside, even in winter. Just go hiking in the woods, walk around a pond or something.”

Similarly, Moser said winter does not stop him from spending time outside either.

He said, “I go outside a ton in the winter such as walking, hiking and shoveling snow. I run every morning outside unless it is negative 30 degrees. I really just try to get outside every day and think it is super important to spend as much time outside as you can. Even if it is cold, if you wear the right clothes, you can still go outside.”

Paxton said that she is thankful because the cold weather does not prevent her from gardening.

She said, “Even though the weather sometimes prevents me from going outside, I do most of my gardening indoors. In the winter, I am grateful for this because I can still keep my plants… Really, we’re at an age where everything is constantly changing, so it is really nice to have something that stays with you throughout (the seasons). Most of the time the plants grow and get bigger, and seeing this growth provides a sense of satisfaction. It used to be little, just like my skill set, but then as I’m growing and evolving, they’re doing that too, so our progress is side by side.”

Paxton said that this feeling she gets from taking care of her plants is why she recommends others to consider trying gardening.

She said, “I would recommend trying out gardening. Even if you don’t think that you’re interested in it, people can change. Definitely go ahead and try it because it’s fun and really enjoyable once you get started.” Click here to read about what the best periods of time are to plant which crops in Indiana are.

“Whether it is taking Outdoor Exploration or just going for a walk, consider increasing your time spent outdoors,” he said. “It really is fun, and you get so much out of it.”

Furthermore, a 2017 study conducted by the American Cancer Society found that in addition to helping many such as Moser with their mental health, going on walks outside helps improve physical health. The study followed 140,000 adult Americans and found that those who walked for two hours a week had a 20% lower mortality rate than those who did not. 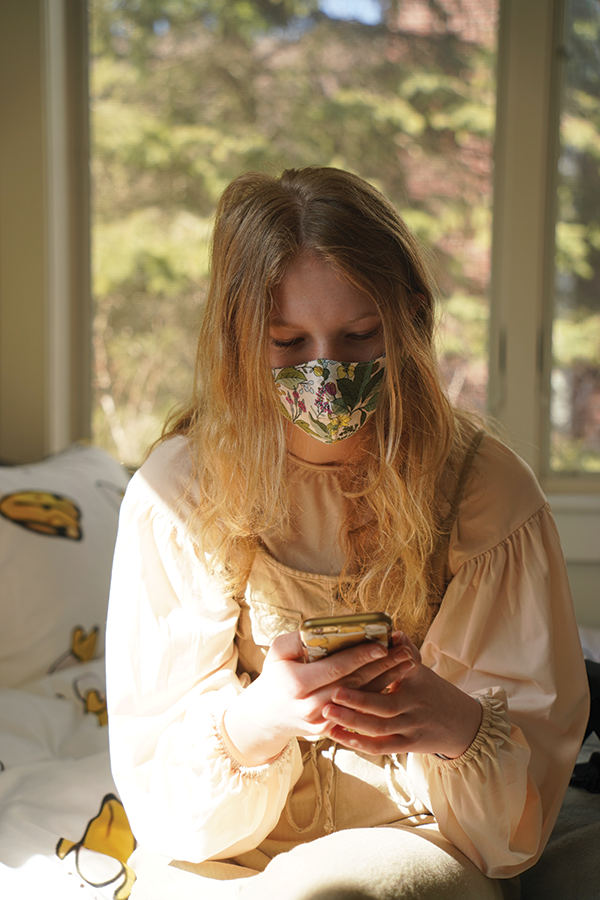 Moser shared a similar sentiment and said that doing light physical activity outside can do much for cardiovascular health.

“I think a lot of people are mindful of their physical health and weight, and losing or gaining and exercise is a part of that. It is hard to walk a mile when you’re just inside your house, so you have to go outside and do it there, so this is one benefit of (going outside),” Moser said. “More importantly than the weight thing is your

heart and getting your heart rate up and taking care of your heart health, and working out outside can go a long way for (the heart). This can be something fun and should be enjoyable.”

Paxton said she agreed, encouraging everyone to find their niche to make going outside a better experience.

“Going outside should be something you want to do, so just try to avoid the mindset of thinking of going outside as a burden,” she said. “If you’re trying to go outside more, spend that time outdoors doing something you enjoy… It really is fun once you figure out what you like, so just take your time, relax and enjoy the experience.”