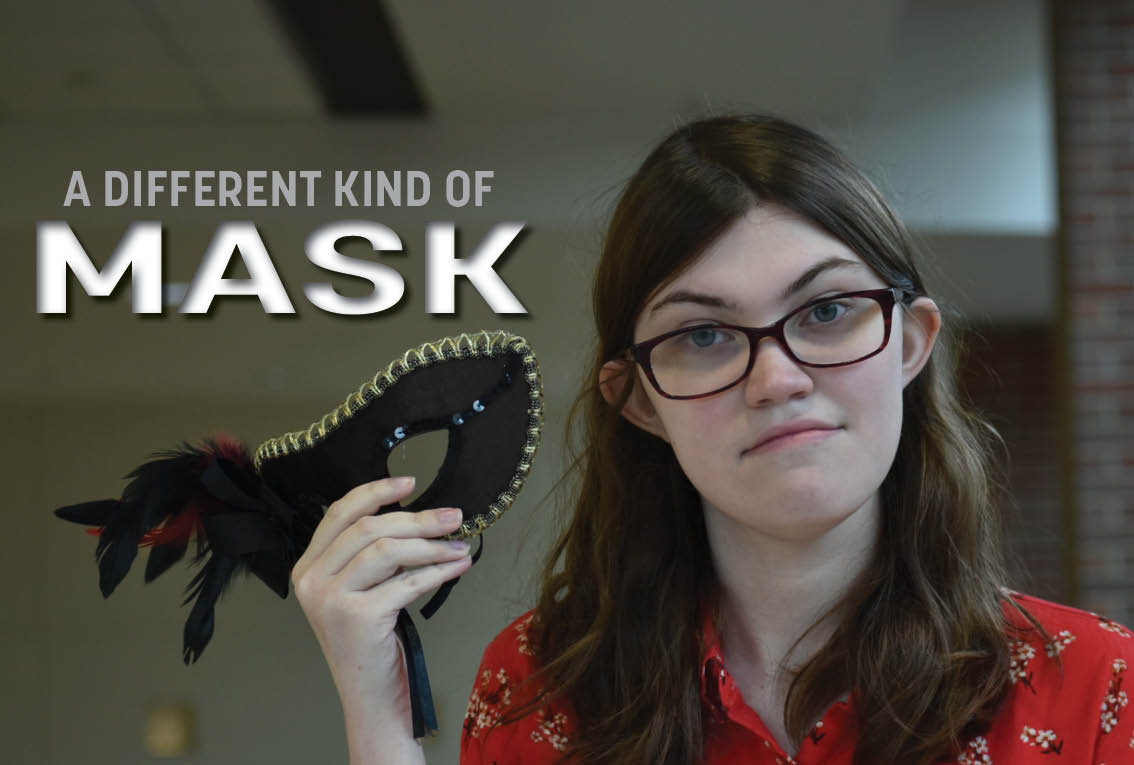 Like many students at school, sophomore Joseph Sandy said he enjoys drawing in class as a means of personal relaxation.

“I like to draw in class because it is a good relaxer and it basically gives my body ‘alright that feels good, release of dopamine, good chemicals.’ It makes me feel nice, and I want that to continue,” he said.

Although Sandy said he loves to draw, he also said his long hours spent doing it are a hyperfixation, a consequence of Attention-Deficit/Hyperactivity Disorder (ADHD), where he can become extremely focused on doing something for an extended period of time. Sometimes, Sandy said, this can lead to unhealthy habits.

“I’m an artist so if I start a project on a drawing tablet, I really don’t stop until I finish it,” he said. “I can spend five hours on a tablet, not eating, not drinking, not taking a break, and that can be a problem because I’m human. I need to do that stuff.”

Sandy isn’t alone. A 2016 study from the Centers for Disease Control and Prevention (CDC) found that an estimated 3.3 million children between the ages of 12 and 17 were diagnosed with ADHD. Many of these children, like Sandy, acquire hyperfixations over time.

Hyperfixations, however, are not unique to children with ADHD and are also associated with other neurodivergencies.

Sandy, who is also on the autism spectrum, said he has seen hyperfixations in other people as well.

“One thing I have experienced firsthand with autism is that anyone with autism has this one specific thing that they really, really like, (and) that they know everything about. I know someone from middle school who really, really, liked trucks and he knew so many things about trucks,” he said.

In many cases, however, students suppress or “mask” some of these deep interests for fear of the community at large ostracizing them, including friend circles at school.

According to senior Matthea Sparks, who has Asperger’s Syndrome, a condition on the autism spectrum, masking is not an unfamiliar subject to her.

“(Masking is) really tiring and there are some cases where it can be emotionally draining for people and they come home tired because they used all their energy to hide something because they’re afraid to be made fun of,” she said.

According to Healthline, masking is a process neurodivergent people undertake for the purpose of appearing neurotypical in order to avoid stigma. As a whole, masking  can include actions such as scripting conversations, forcing eye contact, mimicking gestures of surrounding people and more.

One key element of masking is suppressing stimming, or repeated movements or gestures. However, this does not come without its costs.

Similarly to Sparks, Sandy said, he has also had multiple experiences with masking.

According to a study by the National Institutes of Health (NIH) from 2019, people who masked often reported having higher levels of stress and anxiety than individuals who masked less often. Another study from 2018 interviewed 111 adults on the autism spectrum and found that those who reported masking had symptoms of depression and felt unaccepted in their respective circles.

Best Buddies sponsor Tony Dunham said masking is also not unique to people on the spectrum or with neurodivergencies.

“Adults, as well, tend to present themselves in a certain way, and it’s hard to be vulnerable and let people see the real you, so if there are things perceived as deficiencies either by society or by high school culture, I think it’s only natural that high school students tend to mask those things,” he said.

According to Healthline, the environment someone is in is a significant factor to masking, because it often takes place in environments where  one perceives a neurodivergency is unwelcome.

Sparks said the school administration could improve education regarding autism and should be more open about it, saying that it’s important because of the ableism she has seen at CHS.

“I was in the bathroom because I do theater and I was changing into my costume and I overheard a conversation where a girl was making fun of a kid who was highly on the spectrum. Don’t do that please. Not to sound mean but (they’re) the reason why it’s been hard to be more accepting about it and there should be more of an open thing about it,” she said.

Sandy said he struggles with picking up on social cues and noticing sarcasm, and said he thinks people being more patient and accepting would be beneficial.

“If you say something sarcastic and they look confused or something, say ‘I’m sorry. I didn’t mean it, that was sarcastic.’ Even if they say, ‘I know, don’t worry,’ it’s better than taking that chance to see if maybe they have autism and they are thinking about that for the rest of the day now. Because that has happened to me before where someone has made fun of me or made fun of something that I did, and looking back I realize that they were just poking fun, but at that point I’m like, ‘Oh god I really screwed up there didn’t I?’”

Dunham said Best Buddies helps solve some of the issues Sandy identified so that both buddies and peers in the club grow and develop interpersonally.

“I think one of the most beautiful parts of a club like Best Buddies is that general ed students can see just how free and loving a lot of special needs friends can be, which alleviates the pressure to mask and act a certain way when they’re with their buddies and at club events or hanging out,” he said.

Sparks said while she feels society treats autism differently now than in years prior, it can still be misunderstood, due in part to public misinformation.

“It’s important to educate about autism, especially since you have some things like Autism Speaks, (which) gives out misinformation. It gives out misinformation about people and stuff like that, it’s saying it can be cured. Autism is not curable. It’s a thing a person needs to learn to live with and it can actually benefit some people,” Sparks said.

Autism Speaks, founded by former NBC CEO Bob Wright and his late wife following their grandson’s autism diagnosis, is known as the largest autism related organization in the United States.

Although the organization does raise money through events such as the Autism Speaks Walk, the world’s largest autism fundraiser, advocacy groups have criticized the organization for contributing to misinformation regarding a proclaimed search for a cure and for a 2009 video titled “I am Autism,” in which the video presents autism as a threat. While Autism Speaks has reportedly “refocused” their mission and removed “cure” from its mission statement following backlash in 2016, but the organization is the subject of controversy.

Sparks said it is important to support students in order to create an environment where masking isn’t perceived as necessary.

“And if they have a meltdown, don’t film it. There are multiple cases on YouTube where a parent would film their child’s autistic meltdown. Don’t do that. If a kid is having a meltdown in the middle of the hallway, support him,” she said.

In addition, Sparks said many of these instances can lead students to further mask themselves to avoid stigma.

She said,“(Masking) can add way more stress and it can add a lot of mental health issues too, especially when it comes to self confidence and ‘I’m worth something,’ you know? Or ‘I’m good.’ It’s really hard, especially if you’re masking because it makes it feel like you’re wrong for being the way you are, but if you have autism there is nothing wrong with it.”

In addition to causing stress, masking can also often lead to an array of misconceptions regarding people with autism and other neurodivergencies as a whole.

Sandy said, “No one would guess that I have autism, because people only see the physical stuff. People only see the people in wheelchairs and the people with student resource teachers, but there are some (neurodivergent) people that don’t have that and there are some people that go on their daily lives without an (instruction assistant) and all that type of stuff and you may never know it, so be kind and be patient with them.”

Much of this ties in with renewed calls for using the term “neurodiversity,” which aims to reduce stigma around neurodivergencies and consequently masking in people who may be at higher risk of doing so. Per the Stanford project of the same name, neurodiversity “regards individuals with differences in brain function and behavioral traits as part of normal variation in the human population.”

As a movement, neurodiversity has continuously gained traction within recent years and has helped to normalize and educate people about diverse traits.

Sparks said, “That’s why I feel like autism should be (taught about more frequently). It should be more open to talk about, because of course there are always (going to) be kids that make fun of it.

“But if there’s more of a path, more of an opening so it can be highly explained, I feel like that would be wonderful and more open for kids,” Sparks said.

Dunham said he agreed with Sparks that education should be made more available.

“Honesty and vulnerability is a good stepping stone in general for adults and high school students of saying ‘this is me, all my flaws and the good, the bad’ and being accepting of people that are different,” he said. “I think that goes a long way with helping alleviate some of the pressure to conform.”

Sandy also said he thought being open to learn about the spectrum is beneficial to all people.

“One main thing is just be more patient, be more accepting of other people,” Sandy said.  “Because if you’re not nice to each other, nothing is (going to) change and nothing is going to happen. It’s going to be the same old thing.”