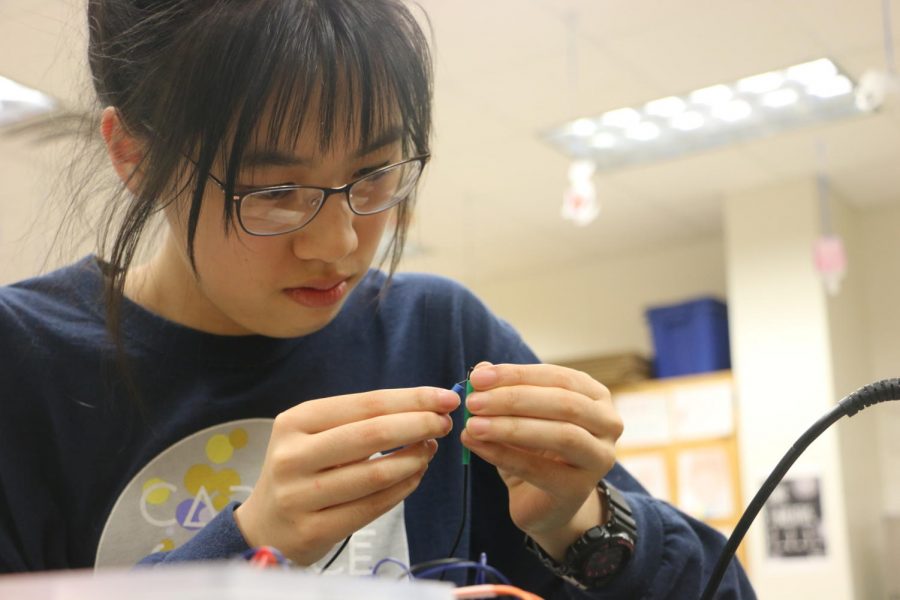 Can you talk about your involvement in STEM?

For Science Olympiad, I do four events right now: Astronomy, Detector Building, Sounds of Music and Circuit Lab. I basically prepare notes and build whatever’s required, and then we prepare for invitationals. More importantly, the state tournament is in March.

For SNHS (Science National Honor Society), we do a lot of science fairs with little kids at elementary schools, like workshops. Same thing with Science Works, but Science Works is more like a workshop for kids in middle school. Those are the separate workshops that we do at the library, which is always a lot of fun. I like that.

Can you describe your project that you’re working on for Sounds of Music (the Science Olympiad event) right now?

We’re basically making a flute or a recorder; it could be either. (It’s) made out of PVC and the process for (building) that is a lot of trial and error. We started (by) making a mouthpiece which requires measuring and careful drilling. Then, you cut off the ends to change the pitch. And then you have to figure out where you want to drill a hole, which is probably the hardest part. Figuring out where to drill the holes requires a lot of math and just general testing, but it’s improving. Part of the process is just tuning it and trying it over and over again.

Last year, at Regional for SciOly, they tested our instrument and it was a professor at Butler. He was talking to me not just about the science behind it but also the music and less “STEM-focused” aspects of it. That was really cool for me, because I never thought about STEM outside of STEM. That was really cool. It gave me a new perspective on how to view what I’m doing in SciOly and what I can do in the future.

My family is all STEM-based. I started off thinking, “I’m pretty sure I’m going to go into STEM,” and even as I took humanities classes—they’re very interesting but it’s not something that I’d want to pursue the rest of my life. I guess my environment with a STEM family really impacted how I view things.

For me, it’s not necessarily the science, but it’s the people that I’ve met through these clubs that have really impacted me. Just trying to better yourself because, in STEM, you’re going to fail a lot. You’re going to have a lot of failures, but in the end, it can pay off, and that’d be really satisfying when it does pay off. It’s just fulfilling to work, and it’s also nice to know what you really like to do.

Do you plan on pursuing STEM further in your future?

I definitely plan on pursuing STEM because it’s very interesting for me and there’s so much to learn, which is always exciting. I kind of want to major in physics because there’s so many different parts to it that I’m so interested in, and it’s my favorite STEM. It’s also my favorite class that I’ve taken so far.

What drew you to physics in particular?

When my physics teacher was doing a lecture on kinematics—it was basically the first unit of the year—it made so much sense to me. It was amazing because it was how the world works. Then I remember the first time I went home and grinded physics. It’s not an interesting story, but I remember feeling like, “This is so exciting.” It was really cool.

What are your thoughts on the underrepresentation of women in STEM?

It’s interesting because in my physics class we had a pretty even spread. It wasn’t (exactly) even, but it was not just two or three or four (girls). I feel like, in my experience, it’s been pretty even. Even though in some classes—like I’m taking digital electronics right now —there is definitely a lack of girls and there are only a few girls in the class, I don’t think it’s really impacted me that much. I don’t think so much about the female or male ratio. I think more about the learning process, like learning things and being surrounded by people who want to learn as well. So I focus more on that.

What are your thoughts on non-STEM subjects, such as humanities?

Do you have any advice for anyone who wants to pursue STEM, especially girls?

I think they should just continue to pursue what they enjoy, and just keep learning all they can because, in the end, it will be really rewarding.

There’s so much that you can learn in STEM that you shouldn’t be intimidated by that vast amount of knowledge you don’t know yet. If you keep pursuing what you enjoy, it won’t matter what the end result is, because you’ll be satisfied with what you’ve done. You’ll be really happy with yourself.