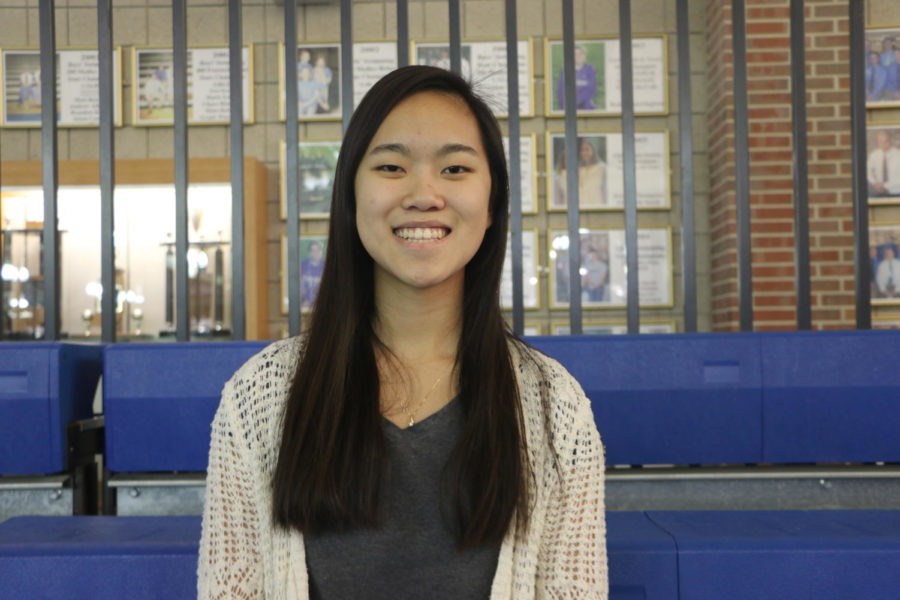 Can you talk about your involvement in STEM?

I’ve taken all the AP science classes. For math, I’ve taken precalculus, AP Calculus BC, AP Statistics, and I’m in IB Multivariable Calculus. For extracurriculars, I do a couple of clubs. I am president of Chemistry Club and this computer science club called Girls Can Code. I also am the captain of Science Bowl.

Outside of school, I do Chemistry Olympiad, which is this high school competition where you just take a series of tests, and the final levels are the national exam. The top 20 attend a study camp and the top four go to the international competition. I’ve been to the study camp in 2018 and 2019. Outside of just test-taking Olympiad stuff, I do research over the summer. I go when I’m free over the summer and just do projects. I’ve done a project on drug morphology in pharmacokinetics, and I did one on DNA nanostructure crystallization.

This past summer, I went to MIT for the Research Science Institute (RSI), which is the six-week program where they match you with labs from around Boston. I worked at Northeastern University during RSI, doing a material science, chemical biology kind of thing where we were looking at a different design for biosensors.

What drew you to these research topics?

Before it was more just whoever had an open lab kind of thing. I’m like, “Oh, I’m interested in chem.” And they’re like, “Okay.” That was (how I got) the drug morphology and nanostructure crystallization research. But for RSI, when you apply you give them your interests. The first essay, I wrote about chemistry and biology/biochemistry.

Because my parents were both chemists and also when I started doing Chemistry Olympiad, I found (chemistry) to be really interesting—especially how you’re able to apply that to the real world, which is pretty much what biology does. That’s why I chose to write about that (for RSI) and they matched me with that subject area.

I think honestly, it was a lot of family influence because they were always talking about work or talking about that kind of stuff. We had chemistry magazines on the table that I would look through. I feel like I just really like science in general because it’s very facts-based, experiment-based, and I think that’s super cool.

I also feel like the visionary part of me that’s like, “I want to make a difference in the world”—I feel like I can go do that through science. So that’s what’s important to me.

Not only in my achievements or extracurriculars, but also just how I approach things is very methodical. I have a plan; it’s like when you write procedures for an experiment—like when I’m writing my to-do list, it’s just all the same kind of approach of keeping everything organized.

Do you plan on pursuing STEM in your future?

I either want to go into chem-bio (chemical biology) or chemical engineering in college. I guess this is, again, “How can you apply chemistry?” Because I feel like in concept, I find it really interesting that, you know, this is how you explain all this molecular-level stuff. For chem-bio, it’s for drug discovery and drug delivery. I find that really interesting in the pharmaceutical industry. And chemical engineering can be anything from renewable energy to design and stuff like that. I feel like it’s just a good way to apply what I know to making some sort of substantial change in the world.

Given the underrepresentation of women in STEM, what have your own experiences been like?

There’s not a lot of overt discrimination, but I feel like (underrepresentation exists) in a lot of clubs. For instance, in Science Bowl my sophomore year, I think I was the only girl. Sometimes you just don’t realize it, and I try not to take too much into account, but it’s definitely something I noticed. The Girls Can Code club is designed to help bring women into computer science because a lot of computer science classes are super male-dominated—almost entirely. I think it’s just important for women to have a representation. Like at chemistry camp (for Chemistry Olympiad) this past summer, there were only two girls and 18 guys, which was not great. There’s always just less women.

I don’t know if it’s stereotypes; it’s just, you feel like you’re like always in the minority and people do realize that. ACS, or American Chemical Society, posted a picture of (chemistry) camp on Instagram and they were all like, “Oh, only two girls.” I feel like there’s this inherent perception in people’s minds that it’s just all these guy scientists, right? Guy computer scientist, guy chemist—like how the people at (chemistry) camp are mostly guys. Physics (Olympiad study) camp this year apparently had one girl. I just feel like it’s definitely something you notice sometimes. It’s not a personality thing, but you just realize that there’s not that many girls there.

All the guys were in suites (at chemistry camp), and it was just me and Jenny by ourselves. I feel like just because there’s less girls, sometimes I get the perception that people think you’re not as smart. The other side of that is that there’s this responsibility to prove yourself more, just because you’re not the norm there (as a girl), so it’s like you have to prove that you’re supposed to be there.

You start studying, and you see how much you can learn, and how well you can do on the test and stuff like that. It’s definitely been super eye-opening because it’s a way for me to pursue something beyond the high school level in a way that’s relatively still organized, instead of just reading random books. Chemistry camp, especially, is super impactful because it’s literally just two weeks of very intensive lectures, lab tests, etc. It was super cool to not only meet people that are really good at chemistry and are really passionate about it, but I also learned a lot just because you’re doing so much (there). The labs that you do, you could never do in a high school environment.

As the president of the Girls Can Code club here, what are your thoughts on women in computer science fields?

I think the reasoning is definitely just that in computer science, it’s extremely male dominated. The drop-off of where interests starts to drop between girls and guys, where that gap increases, is in high school. I think part of it definitely has to do with these perceptions of science being so male-dominated. You go into a computer science class—there’s very rarely more than five girls. And (Girls Can Code) is a way to help garner interest. Like, you know me, and realize that there’s other people—other girls—that are interested in computer science, and it’s not a bad thing.

Do you have any advice for girls who pursue STEM?

Regardless of any gender inequality or stereotypes—I would say, because of this, you should want to go into STEM even more. Don’t be discouraged by it. Rather, be encouraged and feel that need to go and do STEM and set an example for other girls, because there’s other people that see the same situation as you do and they’re like, “Oh I don’t know.” But if you go do STEM and you inspire people, that’s just even better. And not only that, just because there’s more guys that do STEM, that doesn’t mean you shouldn’t do it, right? It doesn’t mean you don’t belong. If you like something, you should do it. Especially when it’s something that’s as important as doing science or research or stuff like that, it’s definitely something you should pursue.