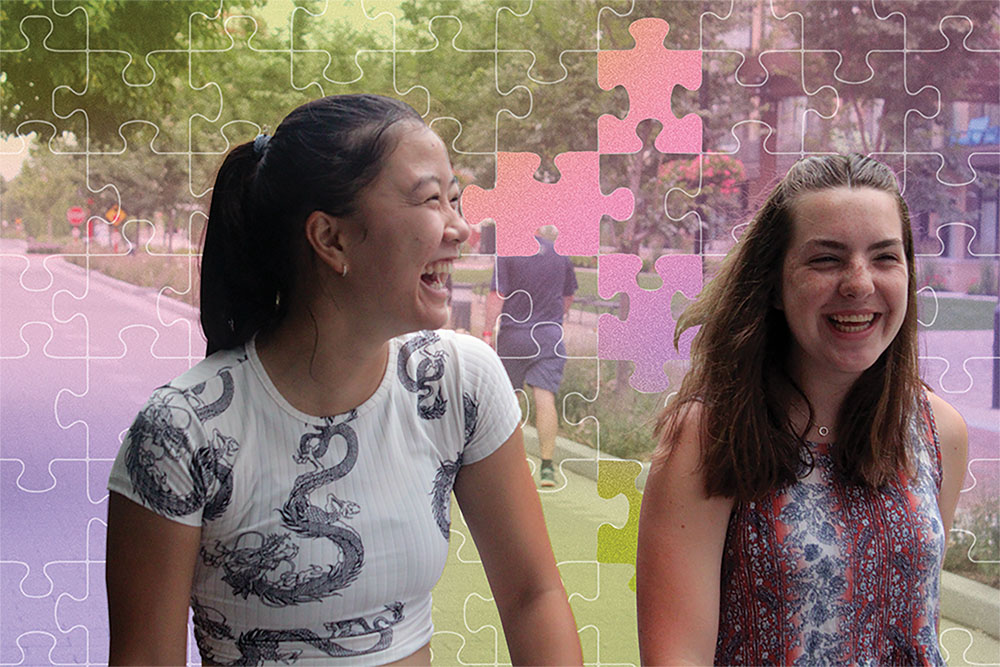 Before the pandemic, juniors Abby Burnham and Nyah Lam said that they were inseparable.

“Previously, we always hung out during cross-country. We always had sports together and we went to the same middle school so we were used to seeing each other every day. Then, during freshman year, we always hung out in the morning. But (during the 2020-21 year) since we weren’t in the same cohort, it was harder,” Burnham said.

Lam said she agreed and that when they did talk, there was a sense of awkwardness at first.

She said, “I feel like we definitely talked less. Yeah, definitely not as much. And this past year, we’ve kind of had opposite schedules so we haven’t had that much to talk about, and even then, I couldn’t keep up great conversation because we were so disconnected when we would talk, I wouldn’t know what to say since I didn’t really know what she was talking about.”

Like Lam and Burnham, senior Jillian Escobar said she too felt separated from her friends because of the nontraditional school year.

Escobar said, “When you are split arbitrarily just by last name, it ended up that a lot of people that I saw regularly my freshman and sophomore years had names in the latter half of the alphabet. I was unable to see them at any point, we were and still are in a global pandemic and didn’t have vaccines yet so seeing them outside of school really wasn’t an option.”

Further, a peer-reviewed 2020 study conducted by researchers from Plos One came to similar conclusions, finding a 16.6% decrease in the number of students who reported they had a study partner.

According to Katie Kelly, social studies teacher, making these connections and building relationships as a high schooler is needed for success and is one of the reasons why she became a GKOM sponsor this year.

“I think the connections that can be built between freshmen and upperclassmen are essential for success at CHS. This kind of dates me, but when I was a student at CHS, as a freshman, we didn’t have GKOMs and I remember my entire first week of school, I came home and I cried because I felt like I didn’t know where I was going like I didn’t know what I was doing,” Kelly said. “What I like about (the GKOM mentoring program) is (that) before the school year ever starts, our freshmen have a way to contact upperclassmen to ask them questions and I think that connection gives our

freshmen an opportunity to talk about things that maybe they might think are stupid or that they’d be nervous to talk about with an adult but they can ask questions like ‘hey, what lunchroom can I eat at?’ and ‘how do I get to my bus?’, because that can be really intimidating to ask a teacher, but it’s a lot easier to ask someone who’s just two or three years ahead of you.”

Escobar agreed and said the need for connections is why she is rebuilding relationships impacted by the pandemic.

She said, “Throughout the summer I’ve been planning get-togethers with my friends and this has never happened to me before because I’m not usually the type of person who goes out and asks people whether they want to hang out over the summer, usually my summers are entirely empty and I’m not meeting anyone, but I really feel like because of the pandemic and because I have this opportunity to rekindle some of these relationships now that I’m fully vaccinated. To me, it’s something that’s really important and something that I’m enjoying so far.”

Burnham said quarantine made her branch out more.

“Being at home with quarantine, it really gave me time to take a hard look at myself and who I wanted to be and who I wanted to become because I’m really awkward in social situations. I really like meeting new people, but I hate being around them at first and all that stuff. When I went into quarantine and I wasn’t in those social situations, when I start to go back into it, I feel a lot more confident. Quarantine made me want to go out there and see new people and try new things because we didn’t have the opportunity to do that for so long,” she said.

But, according to junior Aeneas Hoffman, rebuilding relationships after this prolonged time apart comes with its challenges.

He said, “For so long we have been so isolated and I think we all are not as great with communication and that our social skills have grown weaker with this lack of physical contact so people have grown different in a way that they lack a little bit of communication skills that they once had.”

Further, according to Escobar, the pandemic gave people time to self-reflect and explore their inner selves.

Moreover, Lam said this period of exploration has caused people to change and acquire new interests, causing some relationships to drift apart.

She said, “I feel like, because you were friends with them before the pandemic and you didn’t interact with them during it, the person you know as your friend probably changed. They came out of quarantine different from the person you knew them as and now you have to navigate that dynamic with someone who is now a completely different person in addition to yourself who also probably changed as well.”

Additionally, Escobar said that when considering rebuilding relationships, it is important to remember that everyone has changed over the course of the pandemic and encourages others to proceed with caution.

“It all goes back to the idea of how that person makes you feel. If you are trying to rebuild that friendship and the person is constantly gaslighting you or is overall toxic and is making you feel bad and you kind of feel like this is not what it used to be, I would just recommend some caution. If you have to break up the friendship and it’s the best thing for you then that

would be what I would advocate doing,” Escobar said. “If you feel like the person that they are now, (knowing) they have changed, isn’t making you happy or is not enjoyable or is not comfortable anymore, pulling the plug is something that you have to consider.”

However, Kelly said that this time apart should not discourage students from rebuilding lost friendships and relationships.

“I would say that one of the things they can do is to reach out to friends. It’s really easy to think ‘I’m left out, no one is talking to me.’ What they don’t realize is that no one is talking to anyone. Nobody’s getting together so, be the person to call someone and say ‘hey, let’s get together, hey let’s go to the football game, hey let’s go see the soccer game.’ That would be my biggest piece of advice is, don’t assume you’re being left out. Instead, go out and create active ways to get connected with your friends,” Kelly said.

Further, according to sophomore Shravan Chengalva, though fully virtual-schooling last year made him physically isolated, it also provided an opportunity to reconnect with an old friend.

“I had this friend, we were in different elementary schools, but our parents were pretty close and we used to hang out a lot over the summer and go to each other’s house. Then in middle school, he went to a different middle school and we barely talked to each other. We saw each other maybe a few times and we knew each other, but we really lost connection for about three years or so,” Chengalva said.

“When I got his phone number and then found out he was going to be virtual and that got us talking about what classes we shared. We found out that we pretty muchhad all of our classes together so I introduced him to my existing friend group and we had this discord server where we would talk very frequently, almost every day, and throughout the past school year our relationship grew stronger so this was kind of a positive thing that happened because of the pandemic since it allowed us to get back together in a way I didn’t think was ever going to happen especially after our extracurricular stuff went our separate ways.”

Additionally, Hoffman said that this period of self-growth will provide the foundation for meaningful discussions. during this upcoming school year.

“Through this pandemic with all this isolation going on, we have all gotten the chance to try out new things and that will bring new ideas and new experiences to share when we get back,” Hoffman said. “It’s going to be the stuff that fuels the conversations that will probably go on for months and months to come when we come back to this physical environment. So I think that these new experiences and the self-growth that we have had this past year will benefit us when we come back to in-person schooling.”

According to Chengalva, in-person learning will serve as an opportunity for many students and staff members to rebuild relationships that were negatively impacted by the COVID-19 pandemic.

“Regardless if you are virtual or in-person you still have access to your phone and virtual communication. (In-person schooling) just adds a major element to (everyone) as you are able to talk to people face-to-face,” Chengalva said. “Inherently that is school in itself, it is about talking to classmates and working on stuff. Through that, you form friendships and bonds among other ways as well.”

Ultimately, according to Lam, despite people changing over quarantine, rebuilding friendships are possible as long as both sides make a conscious effort.

“For Abby and I, we just met up again one day while running and after a little bit, it was like we never even had a year off. I just saw (Abby) and was like ‘hey’ and we both just kind of caught up and because of track, we then saw each other every day and then our relationship just went completely back to the way it was before quarantine, even if we changed (individually) during it,” Lam said. “I know it might not be that easy for everyone else, but (just) try your best and let the relationship grow back to what it was before the pandemic gradually. 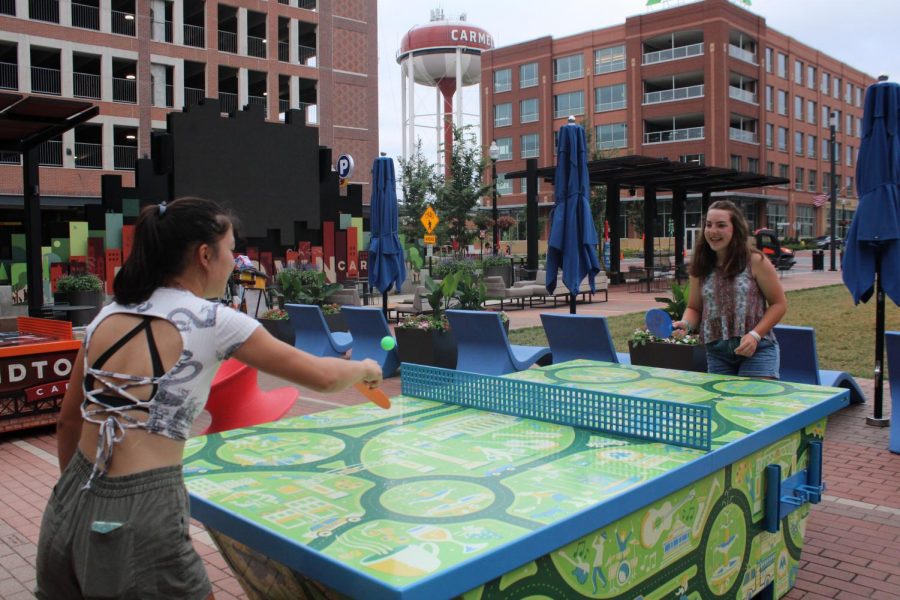