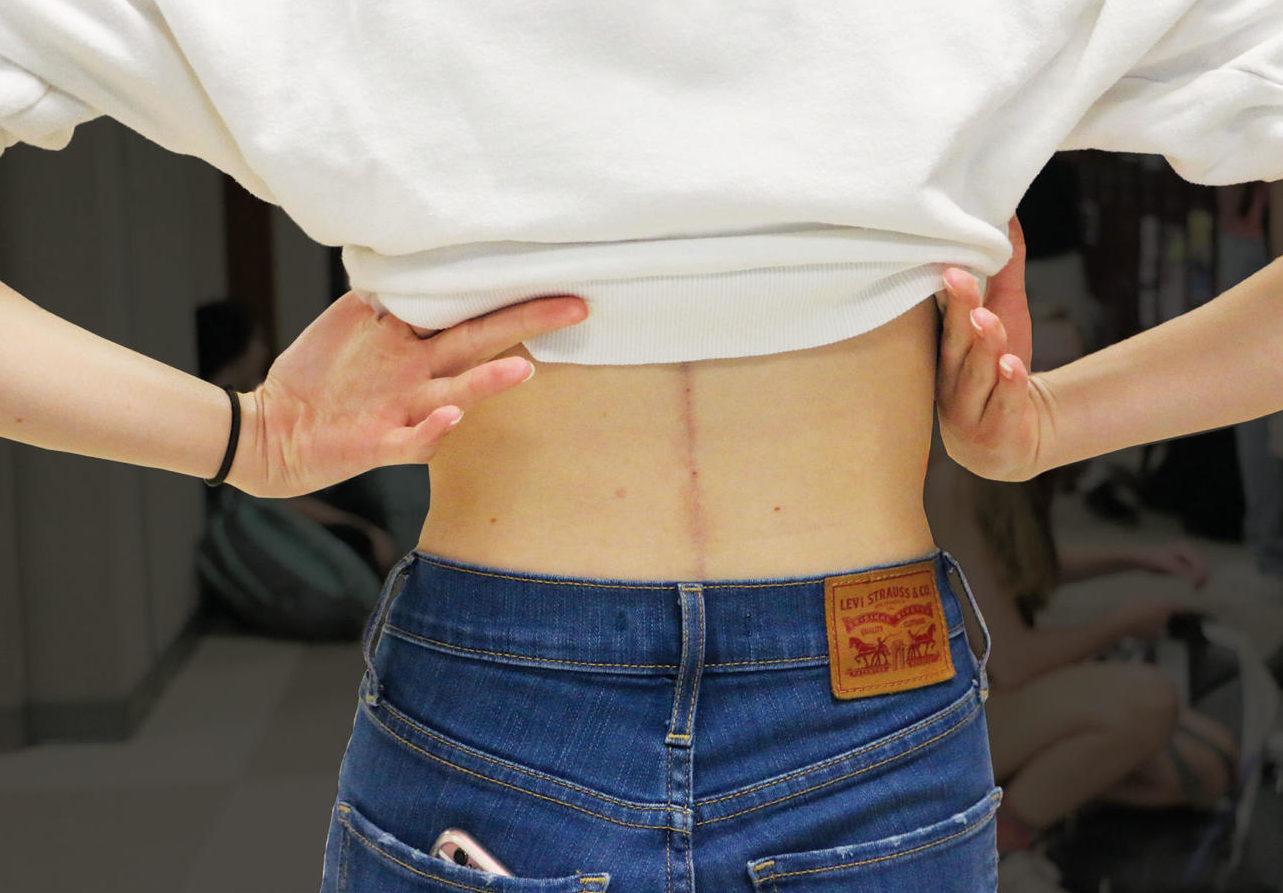 My Spine Doesn’t Hold Me Back: CHS students discuss scoliosis, lack of awareness, impact on their daily lives

By all measures, senior Lauren Salmon is very good at the viola. Salmon currently plays in the Camerata and Symphony orchestras at CHS and will attend the IU Jacobs School of Music in the fall to continue her education. However, her journey into the instrument has been, at the least, unconventional.

In fourth grade, Salmon was an active soccer player when she suddenly experienced extreme stomach pains and her parents took her to get a computed axial tomography (CAT) scan. Doctors discovered a curvature throughout her entire spine, leading to her scoliosis diagnosis. Because of this, Salmon gave up soccer and took up the viola. While some may have been discouraged by the diagnosis, Salmon said it ended up being a positive experience.

She said, “I would definitely say that (I’m grateful that because of my scoliosis, I was able to explore the viola). Whereas I was competing through competitions through soccer but now   (I’ve) become a musician instead, and I (developed) a skill I (can) probably use until I’m super old, whereas an athlete would play their sport for maybe 30 years or so.”

June is Scoliosis Awareness month, and its goal is to highlight early detection and awareness of the condition. Diagnoses of scoliosis are not uncommon, with more than 4  million cases reported by the National Scoliosis Foundation.

Rick Sasso, spine surgeon at the Indiana Spine Center, said scoliosis is defined as a curvature in the spine, usually occurring in teenage girls during puberty. Treatments vary, depending on degree of curvature and time of diagnosis, but  can consist of spinal fusion surgery or spinal tethering through a brace. 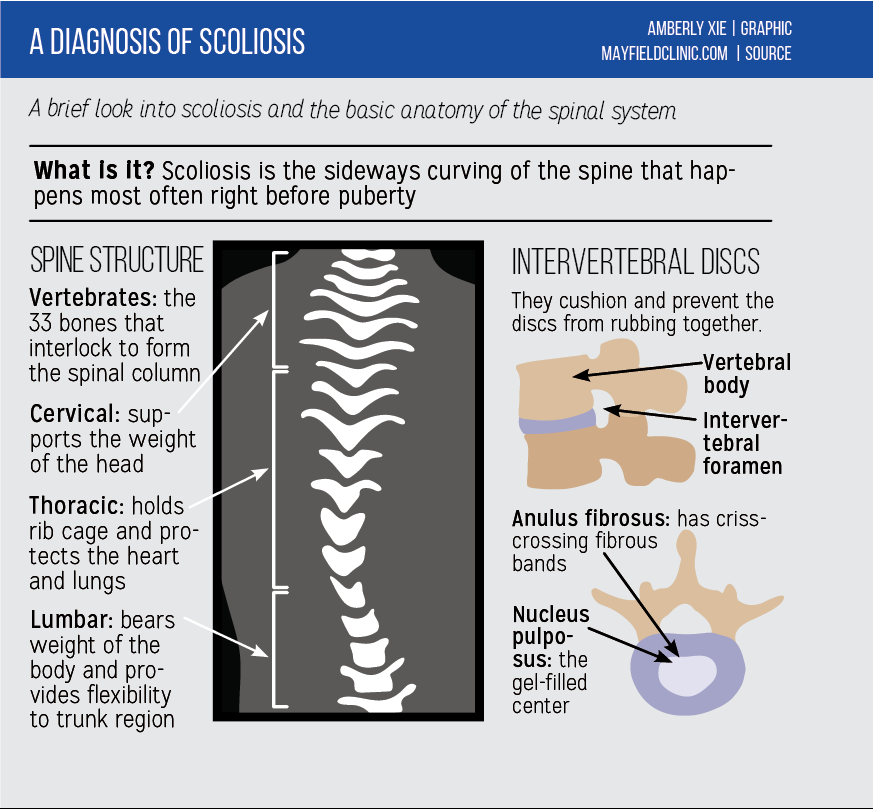 “We don’t know (why scoliosis is more common in girls); some genetic predisposition may be a factor or some hormonal difference, like estrogen receptors in certain areas of the body can kick in, in females obviously but also males,” Sasso said.

Salmon said she wore a Boston brace for four and a half years—a type of plastic body jacket—wearing it up to 24 hours a day when she was in fifth or sixth grade.

“In the beginning it was really uncomfortable. I couldn’t eat as much. I couldn’t exercise or tie my shoes. I could only wear baggy clothes and it wasn’t really flattering. But eventually, it became second nature to wear it. I didn’t feel as uncomfortable to wear it. (When I started, however,) it was a new sense to me, having to put it on and take it off,” Salmon said.

While Salmon discovered her scoliosis at a young age, senior Alex Crookshanks was diagnosed with scoliosis relatively late. When she was 16, her sister was diagnosed with scoliosis as a result when a trainer for her soccer team noticed the abnormality in her sister’s spine. The same year, Crookshanks got a new doctor, and after a simple test of bending down and touching her toes, the doctor was able to notice the scoliosis in her too.

“We expected it to be just like my sister’s (case)­—she walked into the doctor, she had a 10 percent curve and they’re like, ‘Cool, come back in six months’­—but what happened to me is we went in and they sent me down and they were like, ‘Listen,’” Crookshanks said. “I had a 50-degree curve. It was a lot of pain, just every day, pain. My whole back ached, my shoulders ached, it gave me a headache, I was tired all the time, I couldn’t sleep. The bones don’t hurt; it’s just the way that it twists your muscles along with it, because not only is your spine an S-shape, it’s twisting.”

As a result of her high degree of curvature and late diagnosis, Crookshanks underwent spinal fusion surgery in the December of her junior year. She said her recovery was fairly quick, but the pain immensely affected her mood and school work since she got surgery during finals week.

She said, “I was tired; I was upset all the time. For a really long time I was just really angry, and then I ended up getting surgery in December, which is probably the biggest impact it had. (My recovery) was awful, but it was actually pretty fast if you think about back surgery.”

After surgery, Crookshanks eased back into school, attending half days for two weeks, and then resting at the nurse’s office for certain periods.

Similar to Crookshanks, Reagan Smiley, track athlete and sophomore, has a 50-degree curve and she said she plans to get surgery this summer.

She said, “I don’t think scoliosis has really impacted my track career more so than track has impacted my scoliosis because running and exercise does aggravate the back pain that I have.”

Smiley was diagnosed during her freshman year and wore a brace for most of that year. She said wearing the brace was a hassle, was uncomfortable and limited choices on the clothes she could wear.

She said, “(It was hard) not giving up, because there’s so many times I would just come home and refuse to wear it, and I’d have to talk myself into doing it, thinking I’d regret it if I quit and I’d have to do the surgery if it progressively get worse. So looking at the benefit, the future versus the present, was a big challenge for me. Especially when you’re ten or nine.”

Additionally, Salmon said she often felt a lack of understanding from her classmates because many of them didn’t understand what scoliosis was, or why she wore a brace. However, she said her experience through it has made her a stronger person, and she has learned to not care and to look toward the future. For instance, Salmon was unable to participate in gym in middle school.

Salmon said, “I felt like an outsider in that case, but I learned to look past it. It never made me depressed or sad or anything, it just really tested my confidence and how I looked—my perseverance through it.”

Crookshanks said she also ran into challenges with a lack of understanding from the school.

“Last year, I applied for a parking pass because I was having a lot of pain; I was having a really hard time walking up the trail with my backpack, and I got denied. I had a doctor’s note and I tried to tell them, but I got denied, and I think that was a really big setback, just feeling that it was everything against me, like I got dealt this really bad card, but then the school wasn’t even helping me,” Crookshanks said. “What it took for me to get a parking pass was the actual surgery, when I couldn’t walk, when I couldn’t carry my backpack.”

It’s not all bad, however; for her part, Smiley said she feels scoliosis has given her a greater worldview.

“I’m still the person I was, but I’ve learned that people have stuff that’s going on that no one knows about really, so I’ve learned to be more considerate of people’s situations, because you’ll never know what going to happen to them or what’s happening to them now. So, just taking that into consideration,” she said.

Sasso said he doesn’t think there’s enough general public awareness about scoliosis, but most doctors are good about checking patients.

“There’s probably not (enough public awareness), but I think that pediatricians are really good at looking at young girls and making sure they don’t have a curve and getting them to the appropriate place if they do,” he said. “The big, important part is in young girls especially in middle school to make sure their doctor checks them, and it can be done with a simple physical examination.”

Crookshanks, Salmon and Smiley said they all agree there needs to be more awareness for scoliosis. Initially noticing the curvature can simply be done by bending over.

Salmon said, “Back when my mom was in high school, they would make all the kids bend over and touch their toes and the gym teachers would feel their backs to see if there was a hump on it. But I was never tested as a child, and that was probably not for the best. I had to find out the hard way, through an X-ray. Even some of my friends that have scoliosis, they never caught (it) when they were young enough and they had to get the surgery, and I feel really bad for them. If they caught it when they were younger, then they could have prevented the surgery and could have had their natural spine.”

Furthermore, the need for scoliosis awareness is increasingly necessary, as the progression of the disease can be drastic.

Crookshanks said, “I didn’t know I had scoliosis until I was 16 and I had a 50-degree curve. They start looking at surgery when you hit 40 to 45 (degrees). One thing they always told me is when you leave a curve that’s over 40 to 45, it’s like a Jenga tower: when it starts to tilt so much, it’s going to fall. Then you increase the risk of it getting a lot worse to the point where it starts messing with 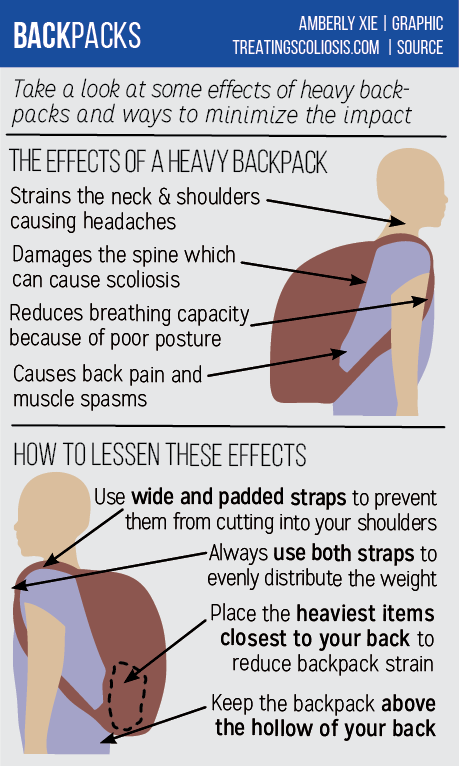 your lungs, your heart, so there is a lot of danger involved with scoliosis even though it just sounds like, ‘Oh, a twisty spine.’ But I didn’t get checked, nobody thought about it, my doctors didn’t check me. My brother, my sister, all of us have scoliosis. It’s just one of those things, like you get vaccines: check for scoliosis.”

Additionally, checking for scoliosis earlier can prevent the need for getting surgery, which prevents several additional costs and pain.

Crookshanks said, “If they checked me when I was 13 and saw that I had just a ten percent curve, they could’ve put me in this brace and it would not have gotten worse. My brother has it, he wears it at night and it prevents it from getting worse. But (for me) since they found it so late, it was toolate; they couldn’t do anything about it. So it can’t be 100-percent corrected at all, but it can be prevented.”