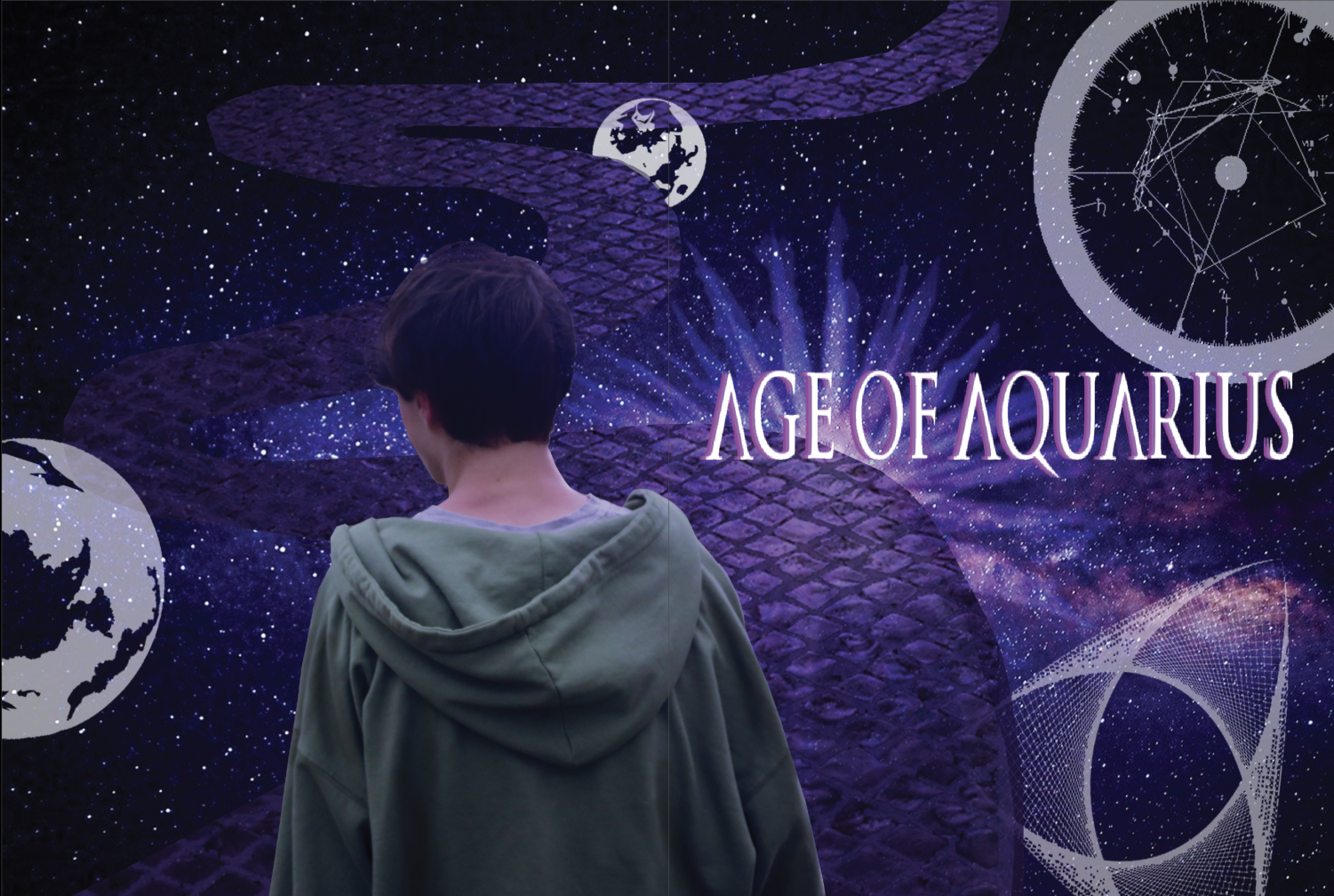 New age beliefs including tarot, crystals, “shifting” and manifesting, have become increasingly popular. Astrology is extremely important to many practitioners of these beliefs, as they believe the positions of the moon, sun and stars can affect individuals on Earth, both directly and spiritually. With some of these upcoming events, including the Snow Moon on Feb. 18 and the Moon Perigee on Feb. 26, students who have new age beliefs share what they’ve learned, how they’ve grown and how other students can become spiritual, if interested.

According to junior Grace Schiller, who is pagan and specializes in reading tarot, many students who grew up with strict traditional religions can find unorthodox new age beliefs more accepting and beneficial to inner peace.

“There aren’t really any dead set rules with (new age beliefs). So growing up, for such a long time living under such strict rules, you can’t do this and this and this,” she said. “Well, with tarot and crystals, I can do whatever I want and no one’s going to tell me I’m going to hell for it. It’s really diverse, too. It can be whatever you want it to be, which is really nice.”

Schiller is not alone; many other students and adults worldwide practice new age beliefs. Rosie Ray, employee of New Age People, a popular shop for resources, classes and research materials pertaining to new age beliefs, said she specializes in knowledge on essential oils, although she is also a self-described “variety practitioner.” She said the increase in popularity of these beliefs is because quarantine gave people time to learn about themselves, and as a result society is changing as a whole.

“I believe in the Age of Aquarius. I kind of think it’s with the times, that the thinking patterns people have been going through are changing and I just think times are changing, really. The youthful group, who are more into social media, they’re seeing a wider range of different things you can practice or believe in, or just enjoy,” she said.

Sophomore Alec Evard said he holds many new age beliefs, especially regarding crystals and their properties, although he also does manifestation techniques and is learning tarot. He agreed with Ray and said exploring beliefs is important for young people today, as it leads to increased tolerance and understanding.

He said, “I feel like exploring beliefs, whether they’re new age or religious, any of them, just so you can at least respect them is really important.”

According to a study by the Pew Research Center from October 2018, 60% of adults who self-identify as Christians also held at least one new age belief, which for the sake of the study include reincarnation, astrology, psychics and the presence of spiritual energy in physical objects. 29% believed in astrology and the importance of astrological events similar to the ones approaching this February.

Schiller said part of the explanation for this data comes from the non-exclusivity of new age beliefs; she said no matter what religion someone practices, there is a space for these beliefs because of their roots in nature and the supernatural.

Evard said he agreed with the results of the study, as many students at Carmel hold new age beliefs or feel intrigued by the ideas. However, he said some can have doubts.

“(New age beliefs) are like any belief. A lot of people are very accepting but some people could be skeptical about it. But otherwise (CHS) is a really accepting environment,” he said.

However, Schiller said the study doesn’t necessarily reflect her experiences and observations. She said as new age beliefs become more popular, debate with others will also become more prevalent and not always in a negative manner.

“I think a lot of people are becoming more accepting of (new age beliefs) and are getting more into it, especially because other people are and then they’ll talk about it,” she said. “I do think there are some people who are kind of skeptical, and to me that’s okay. I’m skeptical about stuff, too.”

According to Ray, while there is a stigma around practicing new age beliefs, students should not feel discouraged and should view it as a personal journey.

She said, “If you’re nervous about (researching beliefs) or if you don’t really know how to look into it, go in with an open, educational mind and try to learn from an unbiased view because I think sometimes (beliefs) seem scary or hard to (learn), but it’s really not.”

Schiller said astrology is a good entry point into these beliefs, even for those still learning, as many of the more niche practices relate back to astrological events.

“The different moon phases, I mean it ties in with astrology. Tarot and crystals are all separate things, but they all work together in their different energies. Then, with the moon phases, the moon is probably one of the most powerful planets in the whole of astrology, so based on how the moon is it means different things,” she said. “There’s certain times where it’s best to ask certain things and you can charge your crystals in the full moon.”

Evard agreed and said he had researched the zodiac signs, which connect to the time and position of the stars and planets at one’s birth. He said learning about astrological events is educational and he personally felt very interested in the topic.

He’s certainly not alone. On Nov. 12, 2020, Snapchat added an optional astrological profile feature which allowed users to view analysis of their star (zodiac) signs and in-depth information about their sun, moon and rising signs’ relationship with their moods and personality traits. Star signs became public domain and a standard part of users’ profiles, along with their names and avatars.

Ray said this contributed to her observations that social media is becoming a safe place for young people to learn and share, as well as feel supported by a community who is more accepting of non-traditional beliefs.

“There’s such unique subgroups on TikTok, per se, where you can really get to know people that are interested in the same things as you,” she said. “So for me, I think it’s just been really nice knowing that there’s other people (who practice new age beliefs) out there and they kind of have a little homespace to talk to others.”

“I think (social media encourages practicing new age beliefs) the same way it fosters a community for all other beliefs, groups and communities of people,” she said. “I think it’s awesome because so many people from so many different parts of the world, who have different perspectives, can share their knowledge. Then, you can kind of piece together how you feel based on all these other people talking about it, which is cool.”

Evard said he thinks  social media has also increased the accessibility of new age beliefs to the point where anyone can learn if they would like to. However, he also said students must double-check sources and not solely rely on social media for information.

“I feel like (the community of people who practice new age beliefs) is partially because of social media and how it has allowed a lot of people to get more access to it,” he said. “I’d probably say (to) do your research and check multiple sources because if you are looking at different properties and stuff like that of crystals and different tarot card meanings, it can vary depending on sources. So just make sure you check the credibility of that source.”

However, Ray said education on new age beliefs is extremely valuable and added students can learn about many different categories of beliefs. For example, Ray said while she felt most intrigued by and knowledgeable about essential oils and aromatherapy, students can find opportunities in psychic development, tarot, past life regression and even yoga.

Schiller said she agreed and said she enjoyed learning about new age beliefs, especially tarot and astral projection in dreamscapes.

“I do encourage other people to explore (new beliefs) because there’s a lot that it can offer you. I think that if you don’t want to dabble in it, that’s okay, too, but it’s good to be respectful of other people who do it,” Schiller said.

Evard said it is worth it to explore new age beliefs, especially as they increase in popularity. He said he agreed with Schiller that researching crystals is a great way to find a community of others who practice new age beliefs, as it is a popular topic here.

Ray said what she has learned from incorporating new age beliefs, including morning rituals, manifestations and affirmations into her daily routine is it is  beneficial for her to practice these beliefs in a way that’s personal and helps her mental health.

“Don’t put pressure on yourself,” Ray said. “(Personal beliefs are) kind of a process for you to learn on your own and there’s no expectations. You really just have to follow what makes you feel good, and don’t put pressure to make it a certain way. It’s your journey.”