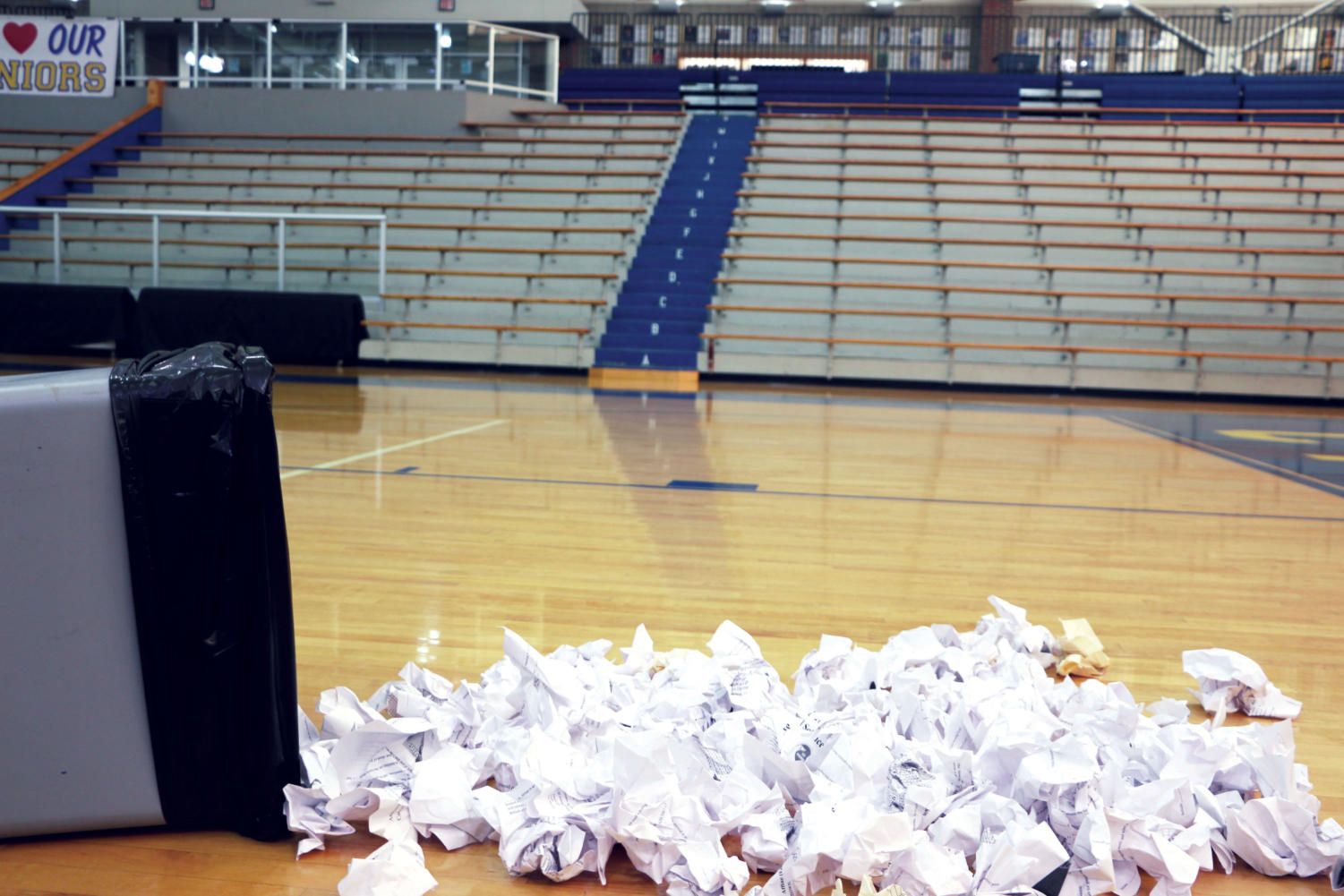 In his free time, sophomore Ethan Stoehr is an avid recycler and plastic collecter. In his room, Stoehr has bins full of plastic waste spanning from salad forks to shampoo bottles. He said that by creating a “plastic stockpile,” he’ll try and convince his mom to stop buying plastics once she notices the massive amount.

Stoehr said that as he started to learn more about the negative impacts plastic has on the environment, he realized he couldn’t just wait around for the world to perish and he needed to take action.

He said, “A lot of people are against the whole idea of caring for the environment. They’ll say things like, ‘Oh, I’ll be gone before then so it doesn’t matter’ or ‘I won’t be able to make that much of an impact alone.’ But I’m not like that; I refuse to just sit around and watch.”

This waste doesn’t just end up in landfills—it covers streets and roads of heavily polluted countries and seeps into the world’s oceans and ecosystems, harming its inhabitants and biodiversity.

Along with Stoehr, several multi-billion dollar corporations have agreed to change their methods in order to be more environmentally conscious. For example, National Geographic no longer uses plastic wrap around its magazines. Coca-Cola broke ties with the Plastics Industry Association and started an initiative to make all of its packaging recyclable, reusable or compostable. However, with all of this positive change going around, the environment is still in danger. The unfortunate truth is that there’s too much waste and too little happening to see a quantifiable difference.

The world of waste has vastly changed in the past few decades as trash becomes more  apparent in our everyday lives. In addition, with the ongoing United States-China Trade War, plastic has become an even bigger problem for Americans. According to the South China Morning Post, for several years, China imported the majority of plastic from around the world and processed it into higher quality material that could then be reused by manufacturers. However, as tensions with the United States grew, in 2018, China refused to import anymore plastic waste from the United States in an effort to improve its own environment and to protect its people’s health.

Stoehr said, “Before, we’ve always relied on China to take care of our recycling for us, so people have definitely turned a blind eye towards the plastic waste problem. I think China pulling away from dealing with the United States’ trash will become a wake up call for us (the United States) because now we have to take responsibility for our own waste that we’re producing.”

Stoehr said he believes that recycling is a very difficult and fragile process for people to do on their own, and the United States does not have the right infrastructure to take care of the problem.

“Recycling is a fragile process; there are so many places where things can go wrong and even more trash ends up in landfills or the ecosystem, and some of it is due to citizen handling. We hear so often about how only a small percentage of what we recycle is usable. Whole batches of recycling are thrown away if there is a non-recyclable contaminant in there because most people don’t have the time to clean off their trash.”

He said plastic is the biggest culprit for the majority of issues with recycling—and he’s completely right. According to the United States Environmental Protection Agency, of the 8.3 billion tons of plastic, 6.3 billion tons have been discarded as plastic waste. Of that waste, less than 9% of trash has been recycled, and the vast majority is gathering in landfills or the natural environment. But what makes plastic so difficult to recycle?

Stoehr said that for many companies, recycling is just not as profitable because the process is so much more intricate and complicated.

“Glass and metals are infinitely recyclable, while paper and plastic are not. Plastic is really just one or maybe two times if we’re lucky. There are so many issues with using plastic today because it’s a myth that it’s completely recyclable,” Stoehr said. “Plastic takes an incredibly long time to biodegrade because many of its components are unsuitable for recycling.”

The difficulty of the recycling process isn’t the only problem, Stoehr said; most plastics that are produced are “single use,” which means they’re used only once in things like utensils, grocery bags and shampoo bottles.

“People have called for bans on single use plastic, but there are so many things that need to be single use, like medical equipment to keep it sterile,” Stoehr said.

Stoehr said although the plastic problem is present on a global scale, there is a lot more we can be doing locally to help it. However, despite massive efforts to better the environment, Indiana still lags behind in recycling and in waste management. The Indianapolis Star reported in January that Indianapolis has become one of the most wasteful big cities in America, recycling less than 7% of trash when the national average is 35%. 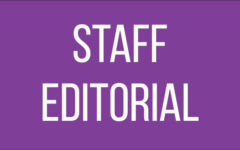 Recycling Renovations: New recycling policy is an improvement, but would benefit from clearer instructions

Suzi Denton is a Premier Account Executive for Ray’s Trash and Recycling Service and takes care of all of the schools’ and universities’ trash here in Carmel.

“The biggest difference between Carmel and Indianapolis is that Carmel has a really great curbside recycling program, and in Indianapolis, not everyone has access to free or easy recycling,” Denton said. “At Ray’s Trash, we don’t own a landfill, so almost none of our trash directly ends up in the ocean or environment.”

However, Denton said she still agrees there are several issues with the recycling process today even in Carmel. She said that this school’s biggest problem in waste management is the exorbitant amount of trash produced in the cafeterias and from food waste.

“I think Carmel schools altogether are making really big efforts to recycle, but the one thing we run into is the fact that there’s so much contamination especially in the food waste. Once we get to the stuff that’s contaminated and can no longer be recycled, it has to be destroyed, which defeats the whole purpose of recycling. The big thing is getting people to do it correctly. A lot of the times it’s just easier to throw away everything into the trash rather than separate recyclables from the trash, or wash food waste from recyclables. Once we streamline this process and make it simpler, we can definitely make much more progress,” she said.

Stoehr and Denton both said they agree food waste is where Carmel lags behind the most in the recycling process.

“I think, at Carmel especially, we make an effort to recycle and not be as wasteful, but it often backfires. Think about how much waste is being produced every time someone throws away a bag of chips or a carton of milk. There is so much food garbage that’s being produced in the lunchrooms and none of this can be recycled because it’s all contaminated by food,” Stoehr said. “That’s the issue with the recycle bins inside of classrooms too. If someone accidentally drops a can of soda in a recycling bin, the other materials are no longer recyclable. All in all, I think the biggest culprit of our waste is food waste and we should be doing a lot more to change that.”

On the other hand, this school has made an effort in the past to increase recycling. For example, last school year, they eliminated the use of trash cans in classrooms.

Felipe Martinez Guimaraes, co-president of the Green Action Club and junior, said his club is trying to do a lot more to fix the issue of food waste and correct the wasteful culture, along with several other environmental problems.

“Our club focuses on doing various projects around the school that can make us more environmentally conscious. For example, we’re trying to implement solar panels on the roof of our school and start composting some of the food waste that doesn’t get used from our cafeterias,” Martinez said.

Stoehr, Denton and Martinez all agree that trash and plastic waste has become a huge issue both globally and locally. However, Martinez has implemented a different approach to fixing the problem.

“I think there’s really two ways to help any sort of environmental crisis: treatment and prevention. A lot of initiatives today, like reducing and reusing, will just lessen the amount of waste we have, but won’t do anything to get rid of the existing waste. That’s why we (Green Action Club) focus more on research projects and things that can help treat waste and plastic, like recycling and composting. I think at the end of the day, it’s not going to be just recycling that fixes our plastic problem, but something really innovative and new,” he said.

Denton said that in terms of prevention, he thinks there is more we could be doing to prevent the problem from advancing.

She said, “I really think that of the three R’s—reducing, reusing, and recycling—our first priority should always be reducing. Recycling is very much a last ditch effort, and if we reduce and reuse correctly then we may not even have the need for recycling. We’re a very disposable society, we throw everything away. It’s definitely our responsibility to change that.”

Stoehr said he believes that even if scientists are working on a solution to plastic waste, everyone individually should make an effort to take care of the environment.

“I recycle and try my best to take care of the environment because it’s my job. It’s probably the least I could do,” Stoehr said. “If you think about it, we as individuals have produced so much trash throughout our lives and it’s just continuing to pile up more and more. If all of us just contributed a little more to helping the environment then we wouldn’t need to struggle as much to take care of it in the future.”